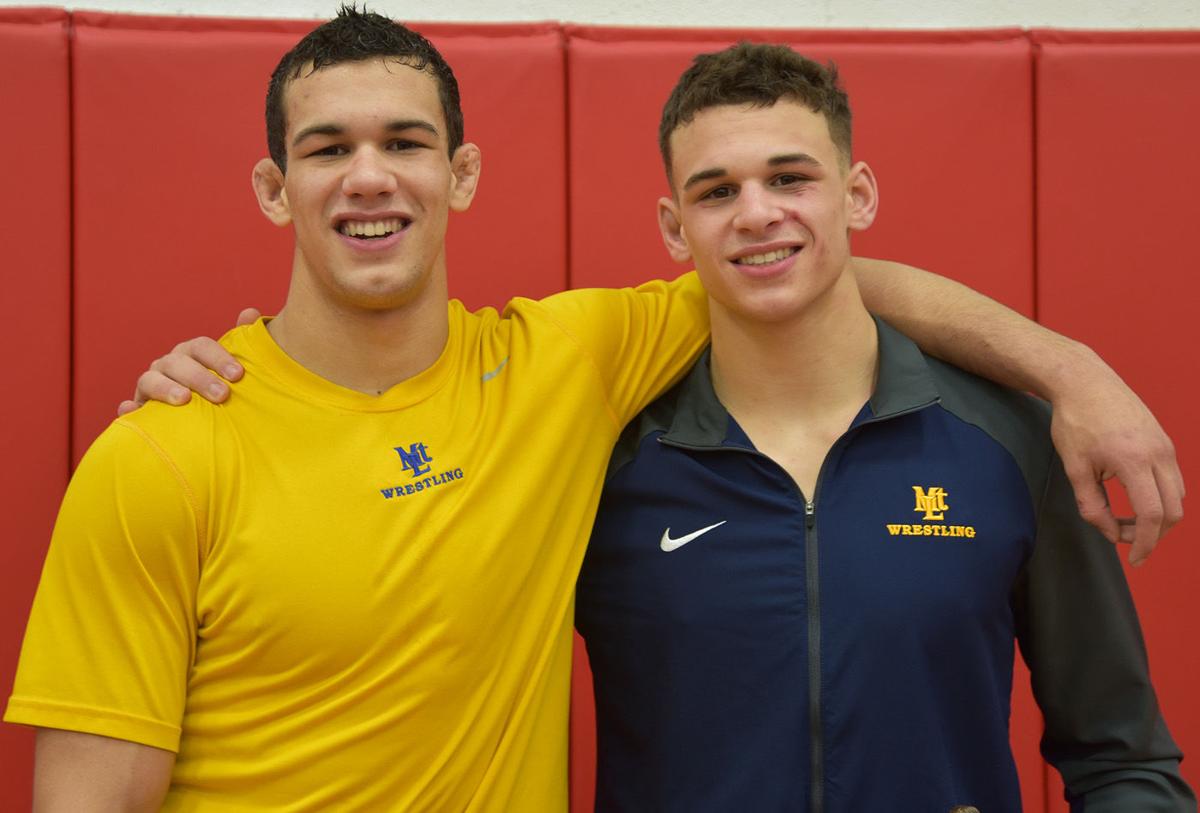 Luke and Mac Stout were both crowned champions during the Allegheny County wrestling tournament. Luke became only the fifth wrestler in the tournament’s history to capture four titles. Mac, a sophomore, added his second. 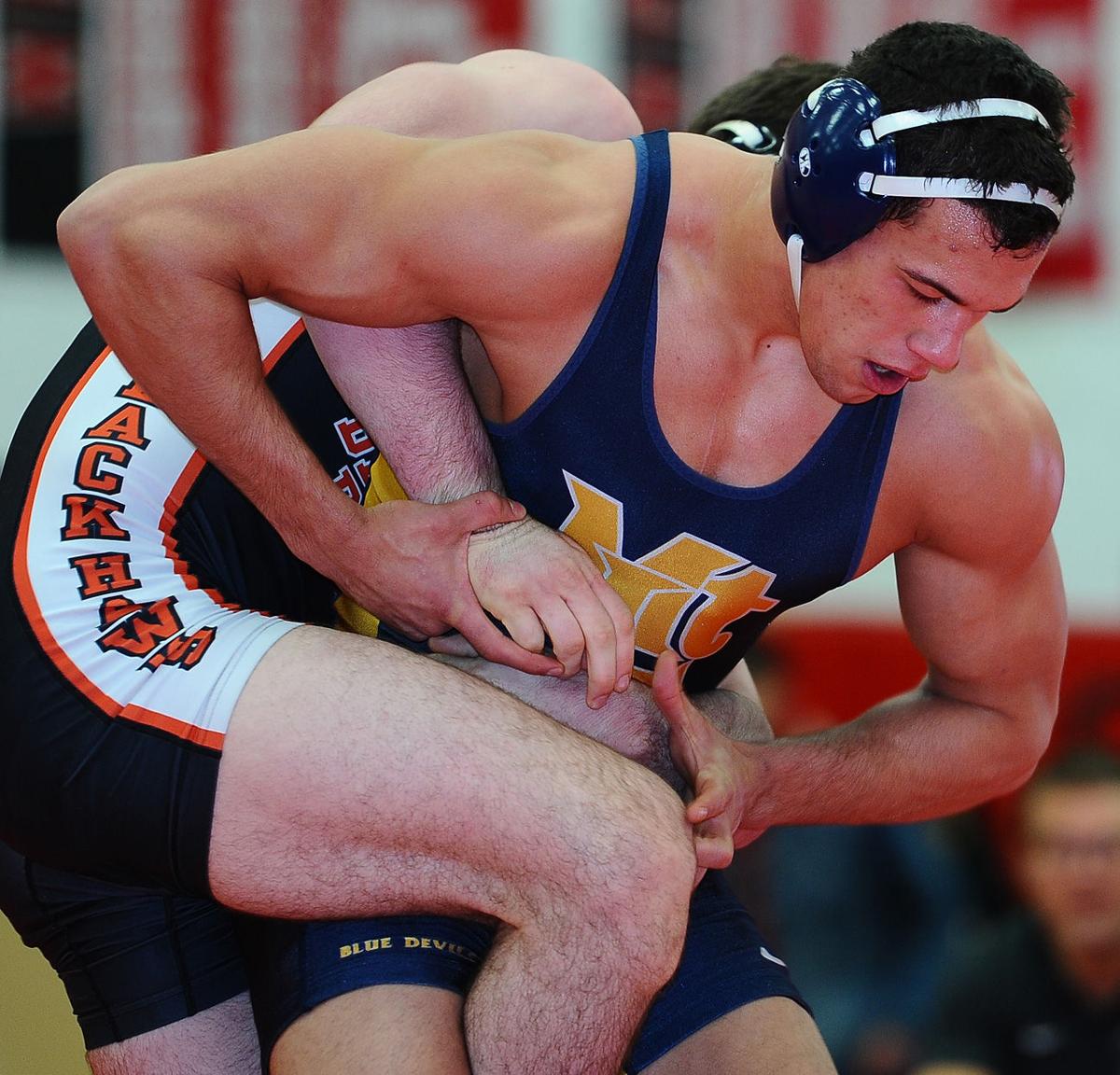 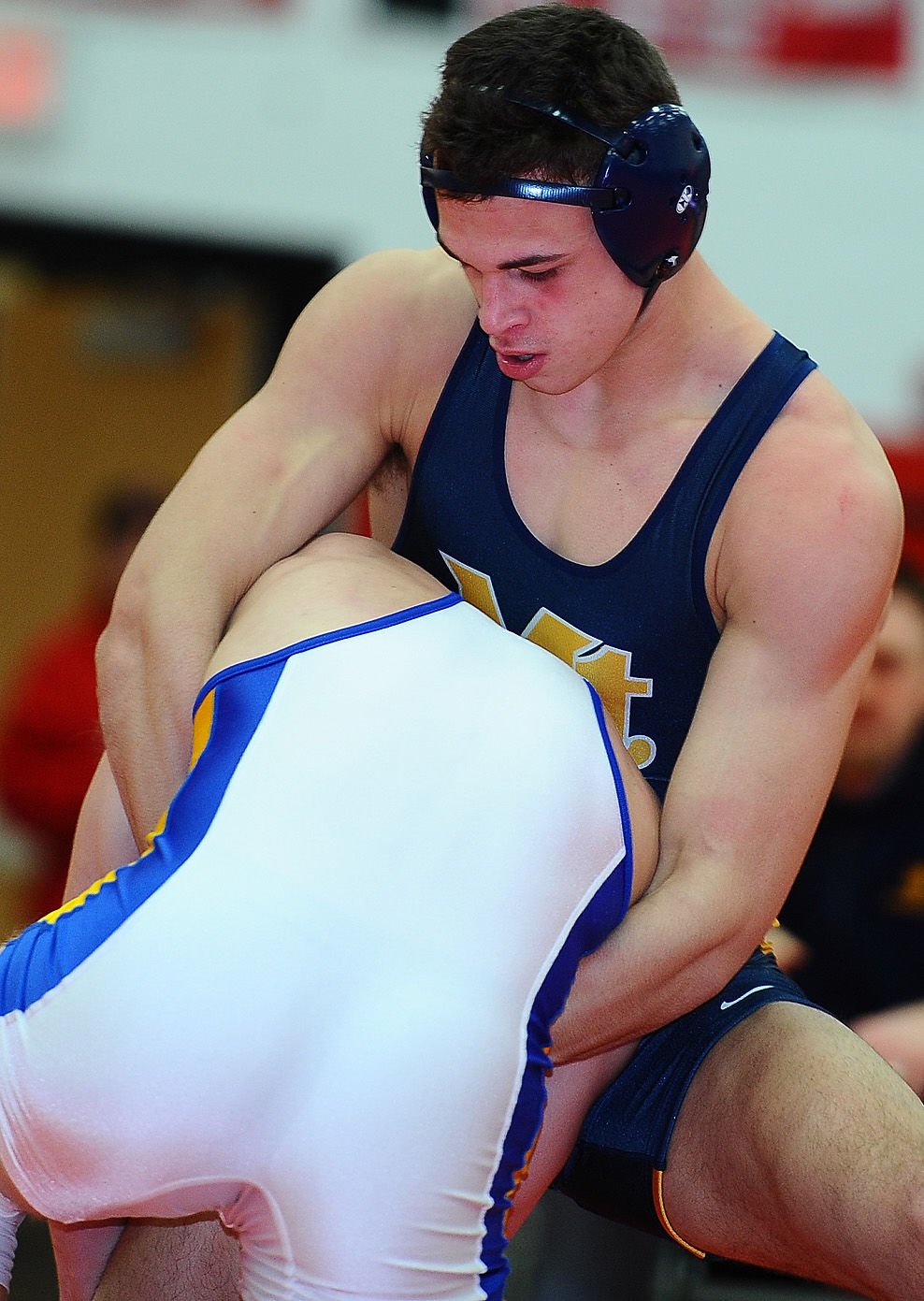 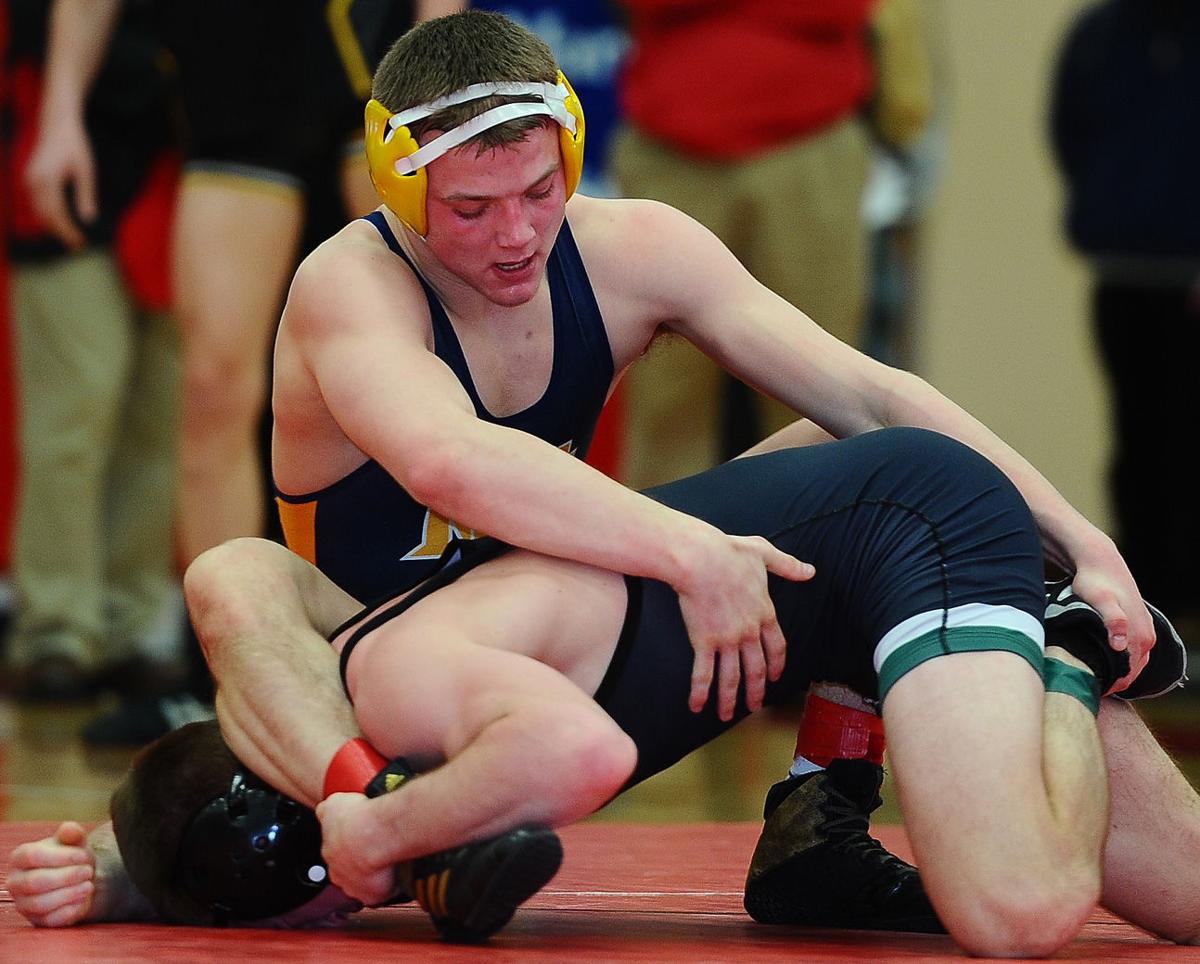 Jackson Gray takes down Nate Lukez during his 5-4 win in the finals of the 145-pound weight class in the Allegheny County wrestling championships.

Luke and Mac Stout were both crowned champions during the Allegheny County wrestling tournament. Luke became only the fifth wrestler in the tournament’s history to capture four titles. Mac, a sophomore, added his second.

Jackson Gray takes down Nate Lukez during his 5-4 win in the finals of the 145-pound weight class in the Allegheny County wrestling championships.

Luke Stout checked off several items on his to-do list this wrestling season as he dominated the action during the Allegheny County tournament held Jan. 18-19 at Fox Chapel.

The Mt. Lebanon senior won his fourth championship and was named the tournament’s outstanding wrestler in the process.

“It’s exciting,” Stout said of winning four titles. “It was one of my goals that I wrote down at the beginning of the season. It’s pretty cool to come out and execute it.”

Stout not only executed, he excelled. He pinned his way into the finals then won a decision over Bethel Park’s Luke Montgomery, 8-3, in the 195-pound title bout.

Stout pinned Keyshawn Fraizer from Woodland Hills in 42 seconds, Dalton Dobyss from Moon in 66 seconds and Donovan O’Malley from Chartiers Valley in 53 seconds to reach the championship match.

“That’s the most dominant style to win so I go out there and try to work on getting the pin,” Stout said of his six-point moves. “I’m always working for the fall. I came out and got the pins fast so I was able to save myself for the finals, which was a tougher match.”

Indeed, it was the third time this season, Stout met Montgomery. He scored closer decisions of 5-2 in winning the Eastern Area tournament title and 6-2 in a recent dual meet.

Stout anticipates seeing Montgomery down the road at sectionals, regionals and states. The pair are the topped ranked wrestlers at 195 in the WPIAL as well as the PIAA.

“We’ll wrestle each other a couple times more and I don’t have a problem with it,” Stout said of competing against an opponent he has wrestled before. “I think it’s a mental edge if you win, but you keep doing what you’ve been doing after you’ve beaten them once. It’s working out.”

It worked out that Stout’s title put him in the record books. He’s the fifth wrestler in the 19-year history of the event to win four times. The other four-time champions are Sean Clair from Plum from 2002-05; Nick Nelson from Shaler from 2004-07; Dom Fory of North Allegheny from 2011-14 and Gage Curry of North Hills from 2013-16.

Winning outstanding wrestler at the tournament was a major accomplishment, Stout said.

“I came out here and wrestled real hard and it paid off,” he said. “It means a lot. Coming on the season, it was just another accolade that I could put away and keep moving forward. The thing is to continue improving on my wrestling.”

Mac Stout continues to improve and keep pace with his older brother. The sophomore won his second county title when he posted a 3-1 decision against Tyler Kocak of Hampton in the 170-pound final.

“It’s a really awesome feeling,” he said. “All my hard work is paying off. It’s a nice little reward, but I have to stay humble. I’m not satisfied. There’s still a lot of work to do, a lot of season left to go.”

Mac Stout, like his brother, didn’t waste much time or energy on reaching the finals. He opened with a fall against Sonny Varrati from Central Catholic in 1:05. After pinning Malique Smith of Moon in 1:14, Stout stopped Frank Guzzi from West Mifflin in 1:12 to move into his match against Kocak.

Mac Stout said he learned that and more from his older brother.

“I’m always trying to keep up with him and ultimately top him and pass him up,” he said. “He’s a motivator and he keeps me in line. He makes me stay humble and work for everything.”

That methodology also earned Mt. Lebanon’s Jackson Gray a top spot on the podium. The 145-pound senior pinned his way into the finals, too, by felling Oscar Portis of Gateway in 1:50, Ethan Eberhart of Avonworth in 23 seconds and Noah Hunnell from Elizabeth-Forward in 1:32.

Gray edged Pine-Richland’s Nate Lukez, 5-4, in the championship bout. The Rams senior was the top seed and a defending county champion.

“I like to be underestimated,” Gray said. “No matter who is out there I know I can compete with them because I have been working hard all this time. I know that’m just as good as the rest of these guys.”

Gray scored a critical third-period take down against Lukez, which helped him secure the title.

“I was down by a point so I knew I had to keep pushing,” he said. “He’s a tough kid and he kept coming at me the whole match. So I had to keep my composure to get that last take down and win it.”

The win is a boost for Gray, who hopes to challenge for a WPIAL title and a berth in the PIAA tournament to be held in March in Hershey.

“It’s a big confidence builder for sure,” he said.

Crittenden placed seventh and and Kapitonov finished in eighth place to help the Blue Devils finish fourth as a team with 172.5 points just behind Chartiers Valley with a score of 173.

Pine-Richland won the team title with 223 points. North Allegheny finished in second place with a score of 222.5.

The Blue Devils qualified for the WPIAL Class AAA team tournament by finishing third in the Section 2 playoffs. After falling to eventual section champion, 43-22, in the first round of action, Lebo defeated Peters Township, 46-33, in the consolation match.

TJ won the title with a 38-34 win against Connellsville, which defeated PT, 59-13, in the opening round of action.

Meanwhile, Bethel Park lost its bid to qualify for the team tournament, falling to West Mifflin, 38-25, in its bout.