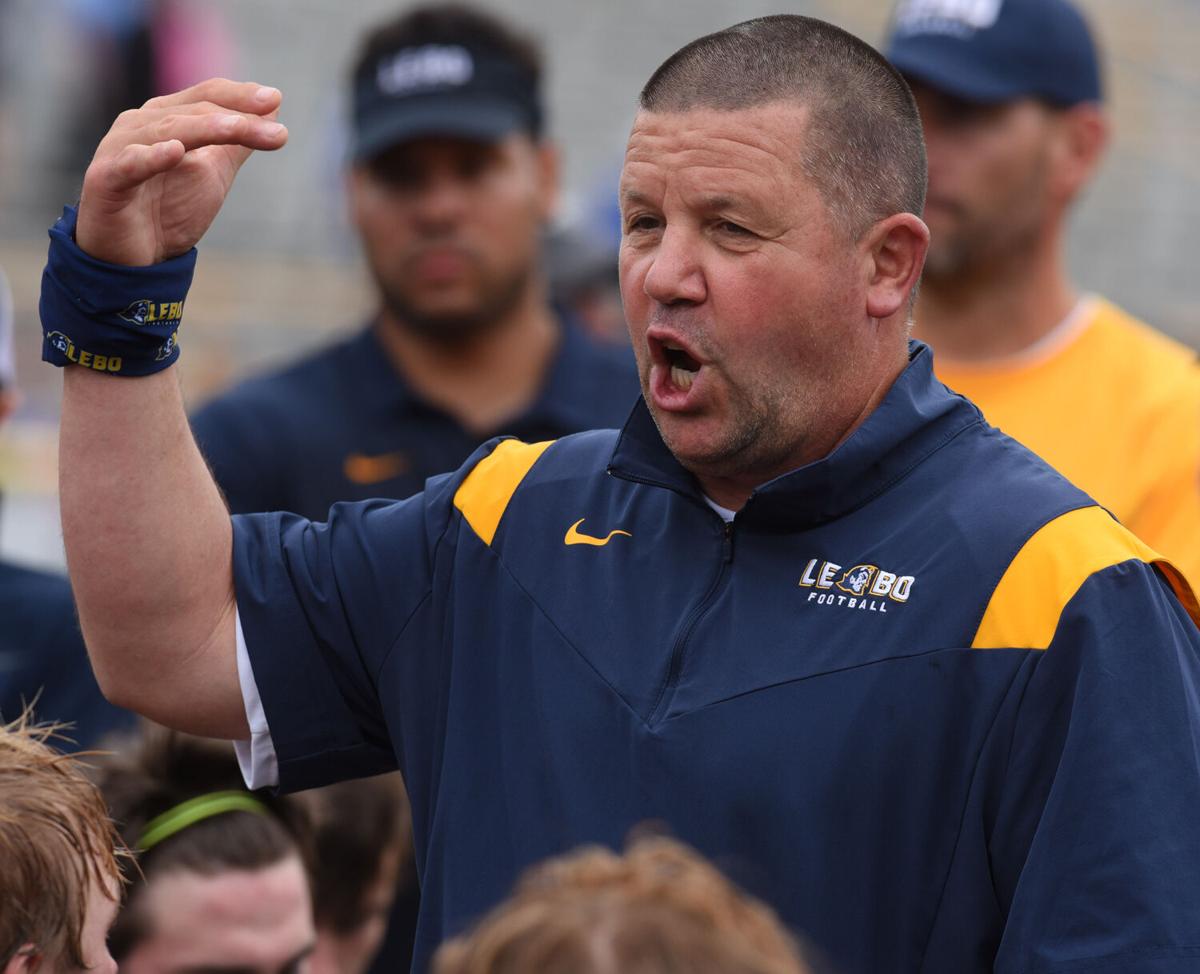 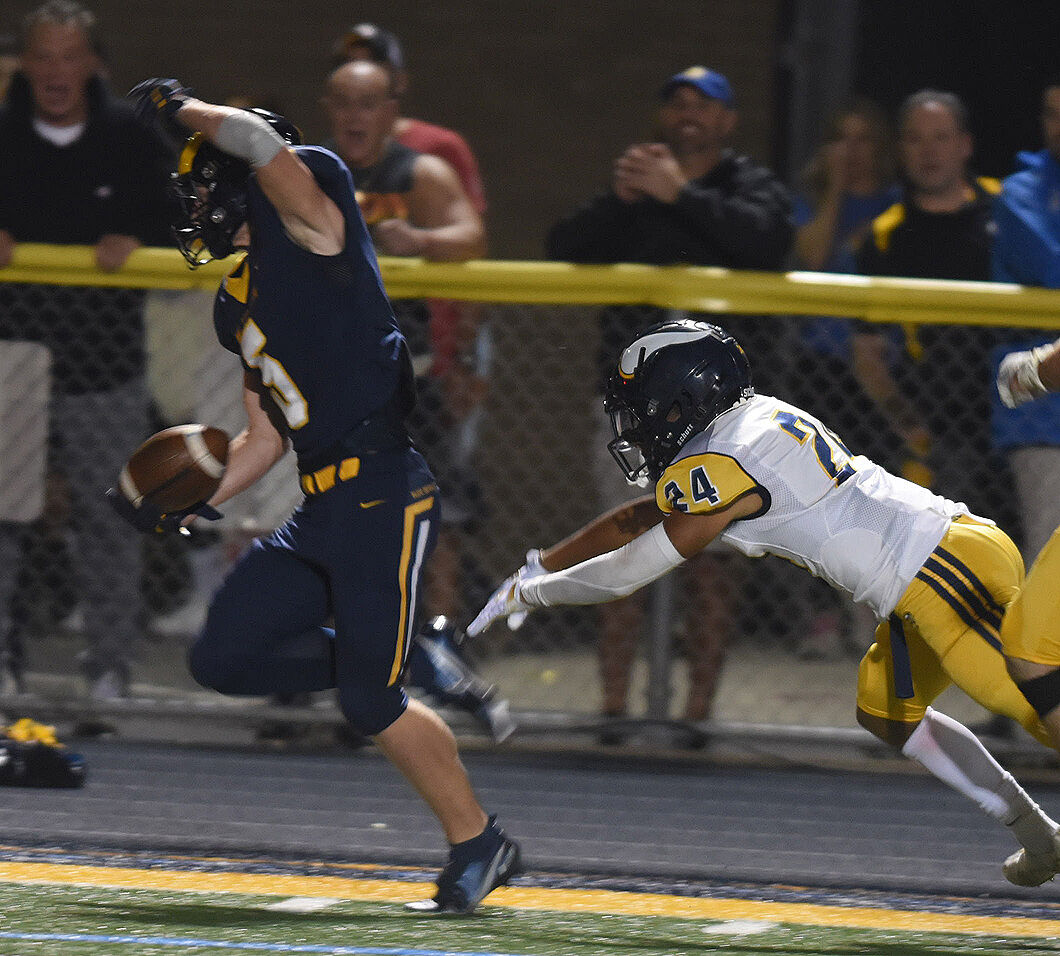 Mt. Lebanon running back Alex Tecza tiptoes down the sideline and out of the reach of a Central Catholic defender. 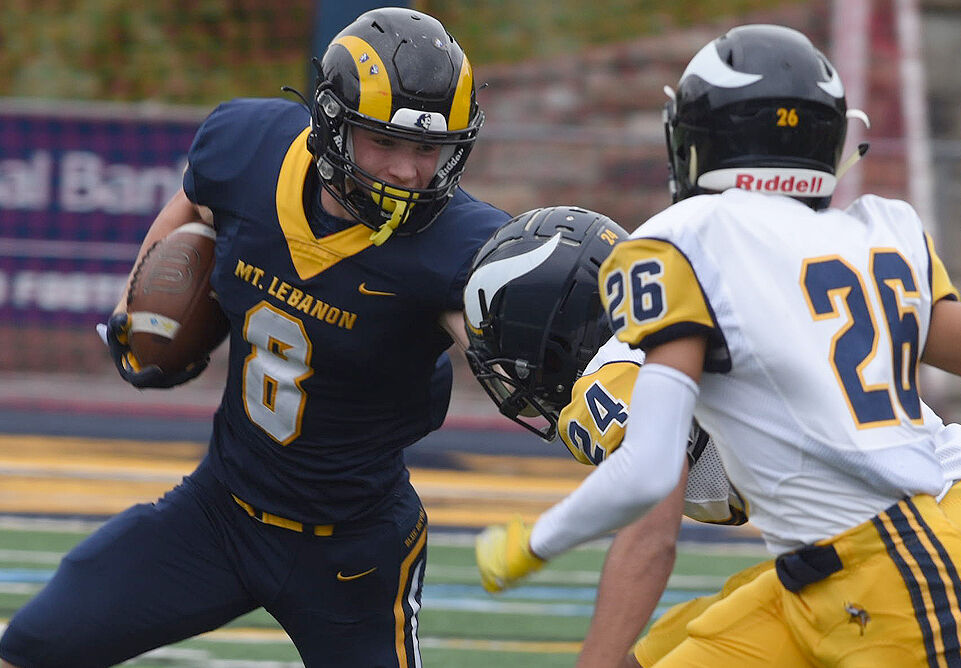 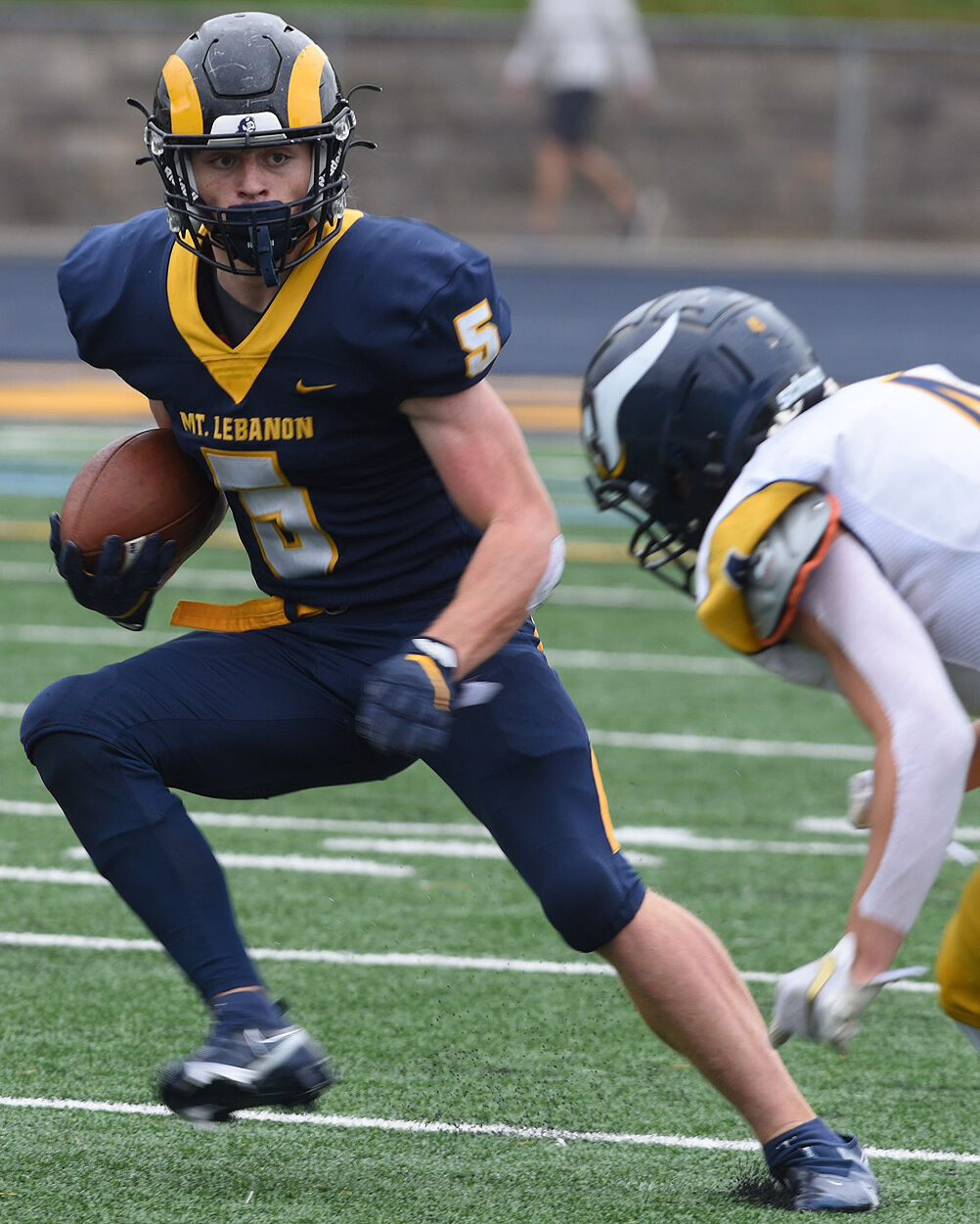 Alex Tecza of Mt. Lebanon switches directions to avoid an onrushing Central Catholic defender. Tecza rushed for 266 yards and two touchdowns in a 35-14 victory over the Vikings. 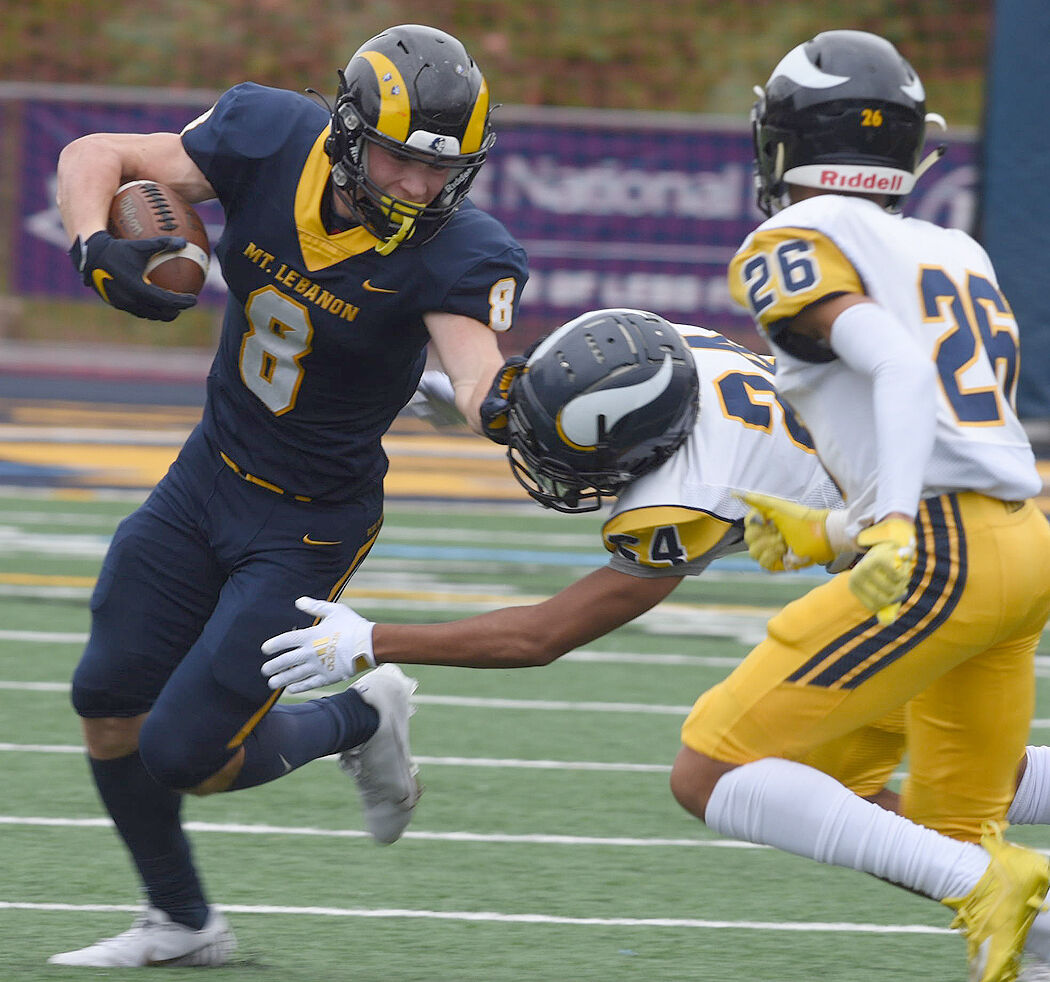 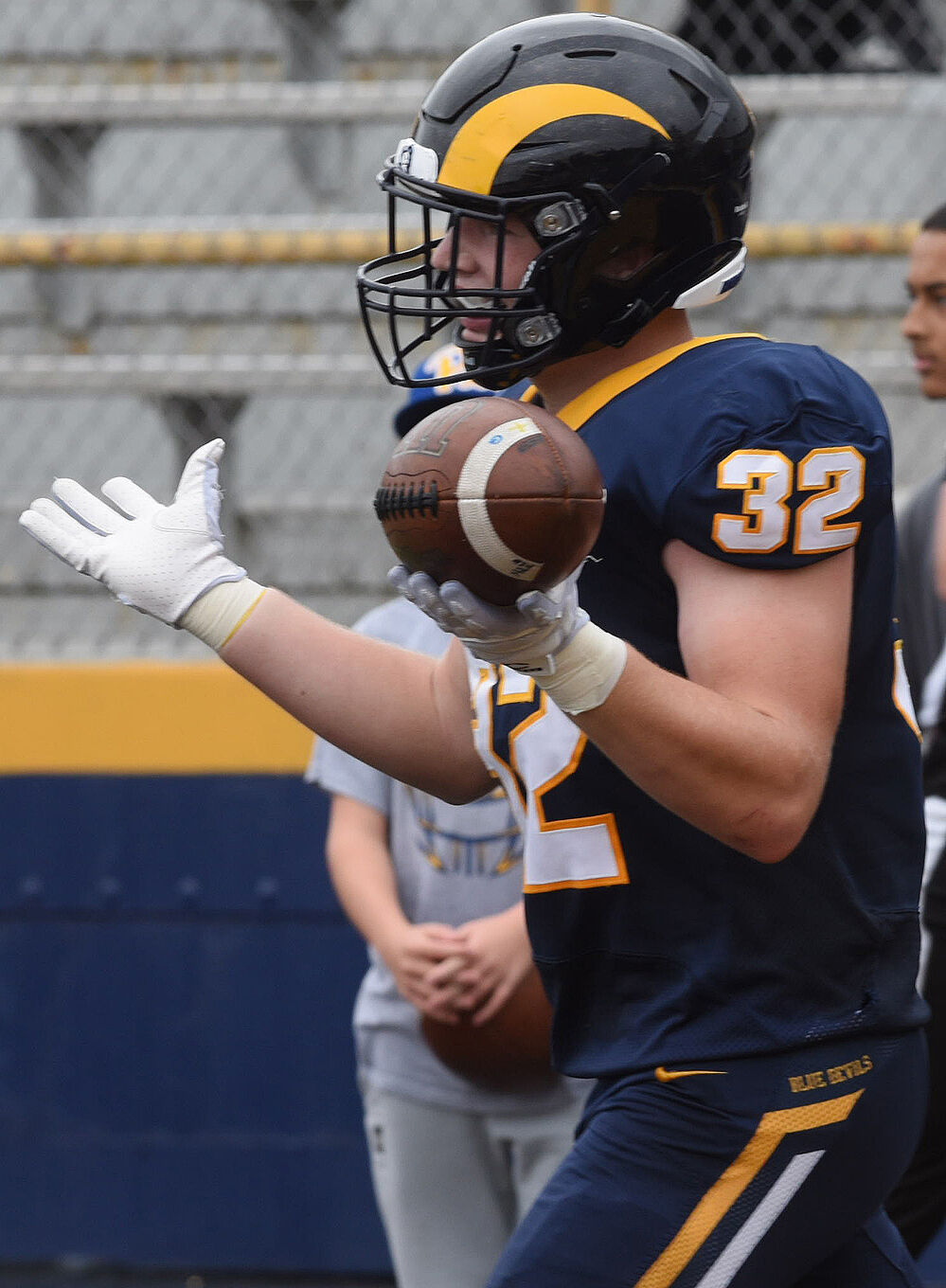 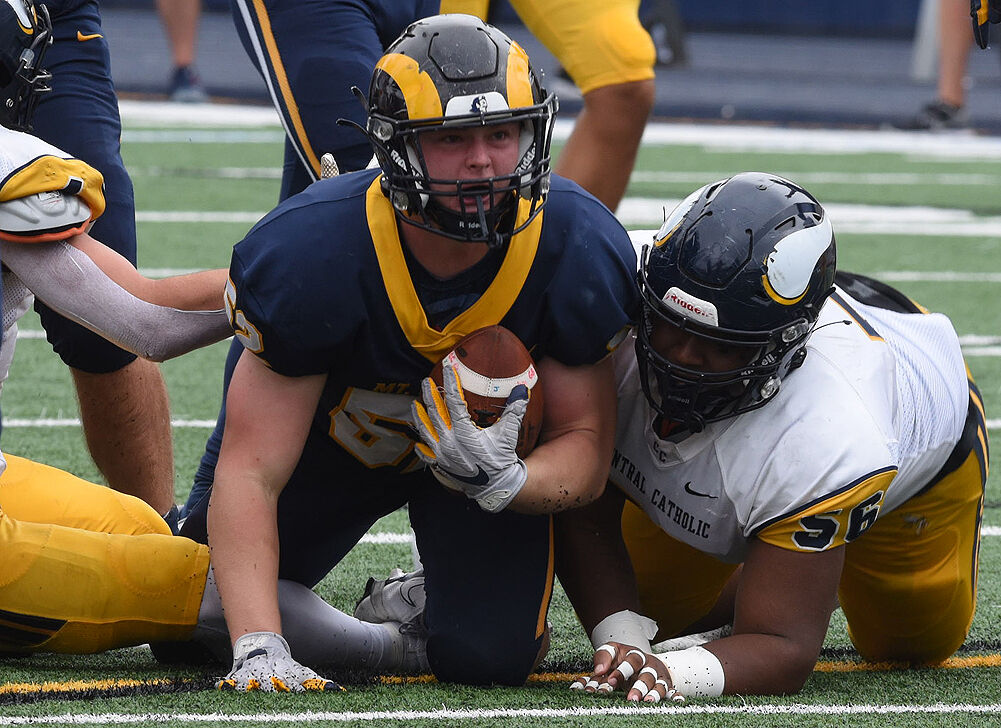 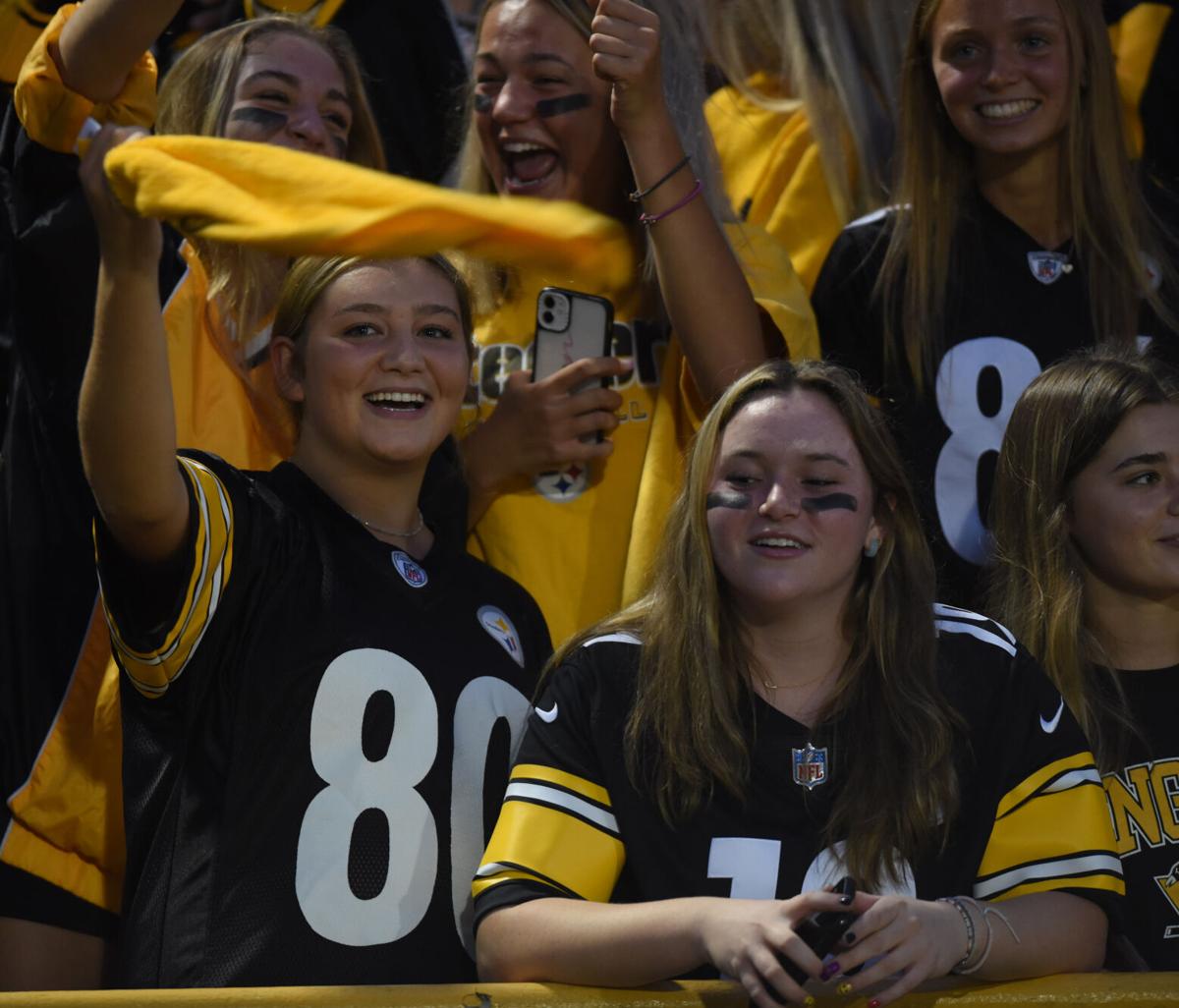 Mt. Lebanon fans display their passion for their high school and pro team during the Pittsburgh Steelers High School Showcase Football Game of the Week against Central Catholic.

Mt. Lebanon running back Alex Tecza tiptoes down the sideline and out of the reach of a Central Catholic defender.

Alex Tecza of Mt. Lebanon switches directions to avoid an onrushing Central Catholic defender. Tecza rushed for 266 yards and two touchdowns in a 35-14 victory over the Vikings.

Mt. Lebanon fans display their passion for their high school and pro team during the Pittsburgh Steelers High School Showcase Football Game of the Week against Central Catholic.

For Mt. Lebanon, the 2021 football season is akin to a boxing match. The Blue Devils must go 10 rounds before they can even consider the next step.

In competing for the WPIAL championship, they will likely face contenders, including Central Catholic, to whom they have already dealt crushing knockouts.

The Blue Devils’ latest conquest — a 35-14 dismantling of Central Central Catholic — demonstrated the toughness the Blue Devils will need to go the distance in their conference as well as the league, according to Lebo quarterback Joey Daniels.

Lebo hosts Seneca Valley Oct. 22 and closes Quad County Conference action at Baldwin Oct. 29 before the Class 6A playoff commence Nov. 5 and conclude Nov. 19 with the championship at a site yet to be determined.

“Central Catholic is a big, strong physical team,” Daniels said. “They will hit you in the mouth over and over but we have the mentality of coming back over and over and taking those hits and hitting back.

“We have a better mentality than last year,” he added. We are a lot tougher, more physical. Overall we put it on the line for our brothers.”

The Blue Devils did not develop toughness overnight. It’s been a three-year process under Lebo head coach Bob Palko. The architect of the Blue Devils surge to the top of the Class 6A rankings in the district and No. 3 rating in the state, Palko had the Blue Devils at 7-0 heading into their Oct. 15 battle at Norwin

“You just don’t wake up and say ‘I’m going to be tough.’ You earn grit,” said Palko, who won eight WPIAL titles at West Allegheny. “That’s a process. It’s a collective feeling among the kids and coaches and the way in which we conduct practices, meetings, weight room and workouts on Saturday mornings. It’s a byproduct.”

Palko said the Blue Devils cannot afford to be soft against any team.

“It’s not a soft game as it is,” he said. “It’s interesting to see the dynamics of it come together.

“Before anybody starts anointing us or patting ourselves on the back,” Palko added, “we realize it’s a long journey. It’s one day at a time. We are going to continue to do what we do and work how we work. Remember, if our expectation level is high, our work ethic has to meet it.”

Daniels is just one of the Blue Devils that have labored to exceeded expectations this season.

On the play, Daniels dislocated his left pinkie finger.

“Hey, I got my first receiving touchdown,” Daniels said. “It came with a little bit of a price but you got to do what you gotta do.”

That attitude did not shock Palko.

“It’s just his mental toughness and his ability to put his teammates before himself,” the coach said of his signal caller.

Alex Tecza is another example of Lebo’s unselfishness.

Another three-year starter, he galloped for 266 yards on 32 carries against the Vikings. Tecza rushed for two scores of three and 43 yards.

“That dude’s a beast, plain and simple,” said Daniels. “Whenever you need a play just give him the ball. He will do the rest. He can go make plays. He’s a playmaker.”

Tecza had 984 yards and 14 touchdowns heading into the Blue Devils’ game against Norwin.

“When you can run the ball, that absolutely makes you tougher,” Palko said. “Alex does not shy away from contact. Again that is not shocking.

“The biggest play to watch, though, was to see how unselfish he was and what kind of kid he is was when he got the first down and instead of getting five or 10 more yards, he stayed in bounds to keep the clock going because he knew that was the right play,” Palko added. “It’s intelligent play like that, that will show up hopefully as we continue on this journey.”

Jake Smith also connected with Grayson Dee for a seven-yard touchdown pass against the Vikings. The score was set up by a fumble recovery by Daniel King.

The Blue Devils also took ownership of their coverage on the game’s opening kickoff. Gannon Carothers rambled 95 yards into the end zone to give the Vikings a 7-0 lead seconds into the contest.

“Trust me,” Palko said “that return is vivid in my mind. Great play by their kid and great execution on their part but at the same time we missed three tackles. We got to get moving.

“Once that happened, all of a sudden you start looking at one another and you find out about what you are made of and what your teammates are like,” he added. “What are they going to do. How are they going to handle it. Not the thing that you want to happen but at the end of the day, maybe that was the wake-up call we needed.”

Lightning forced the Mt. Lebanon vs. Central Catholic game to be completed over two days.

The Oct. 8 contest was stopped with 7:07 to play in the third quarter with Lebo leading, 28-7. Because of the thunderstorm, the game concluded the morning of Oct. 9.

“It was a very interesting situation,” said Lebo QB Joey Daniels. “You can’t control the weather. Mother nature is going to do her thing.

“We had to come back and have the same mentality and get up and secure the win.”

Lebo head coach Bob Palko agreed. He said playing a game over two days was a ‘different’ and ‘unique’ experience but he complimented his staff and his players for being prepared.

“It’s a delicate situation to be in because you worry about injuries and letdowns but it was good to see how we handled it and responded. I tip my hat to our seniors and their leadership. I knew we would do the right things.”

“That put the exclamation point on the game,” Palko said. “Basically, it said, ‘hey, we are here to finish what we started.”