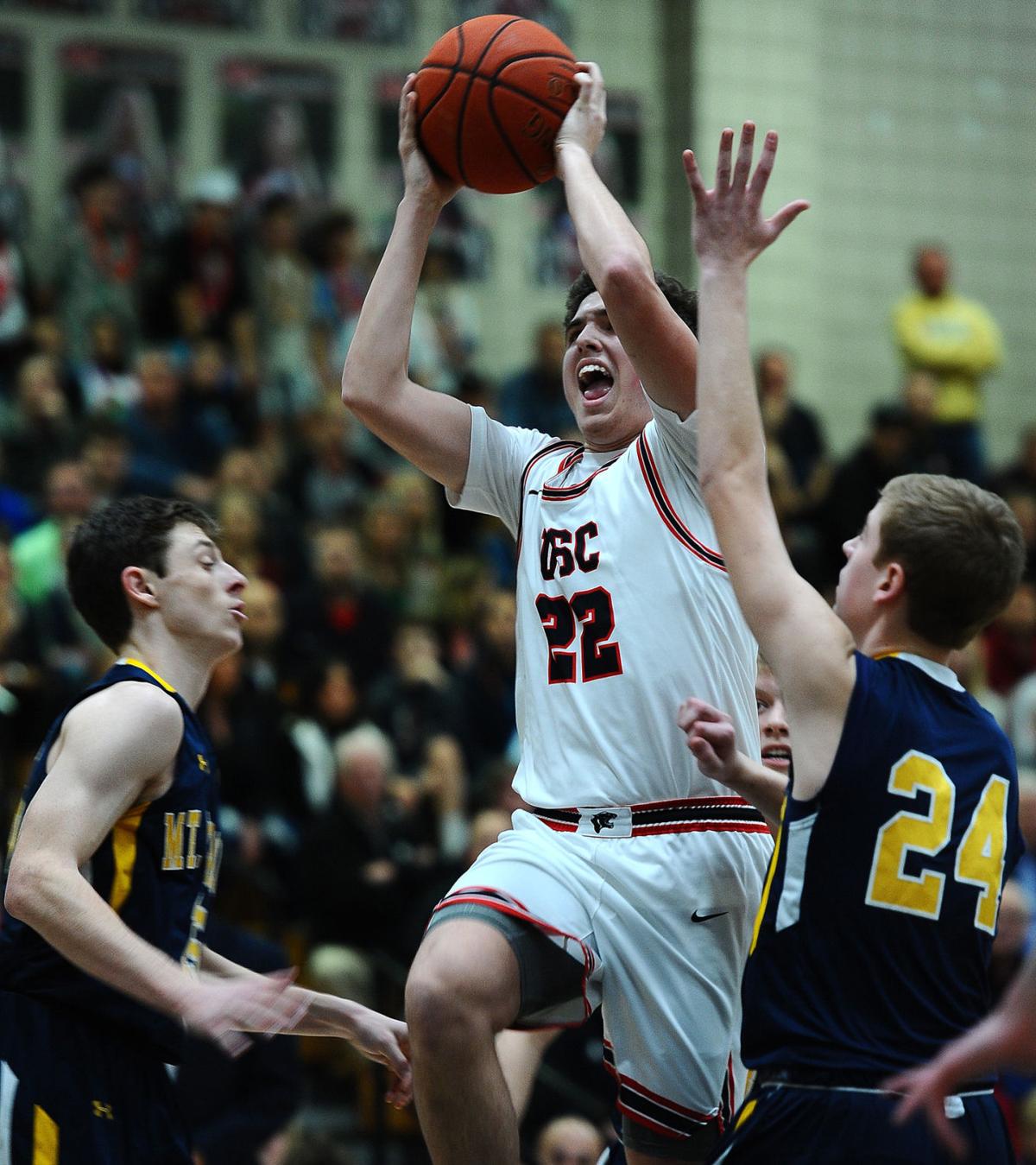 Upper St. Clair’s Luke Gensler finds an opening and drives through Mt. Lebanon defenders on his way to the basket. 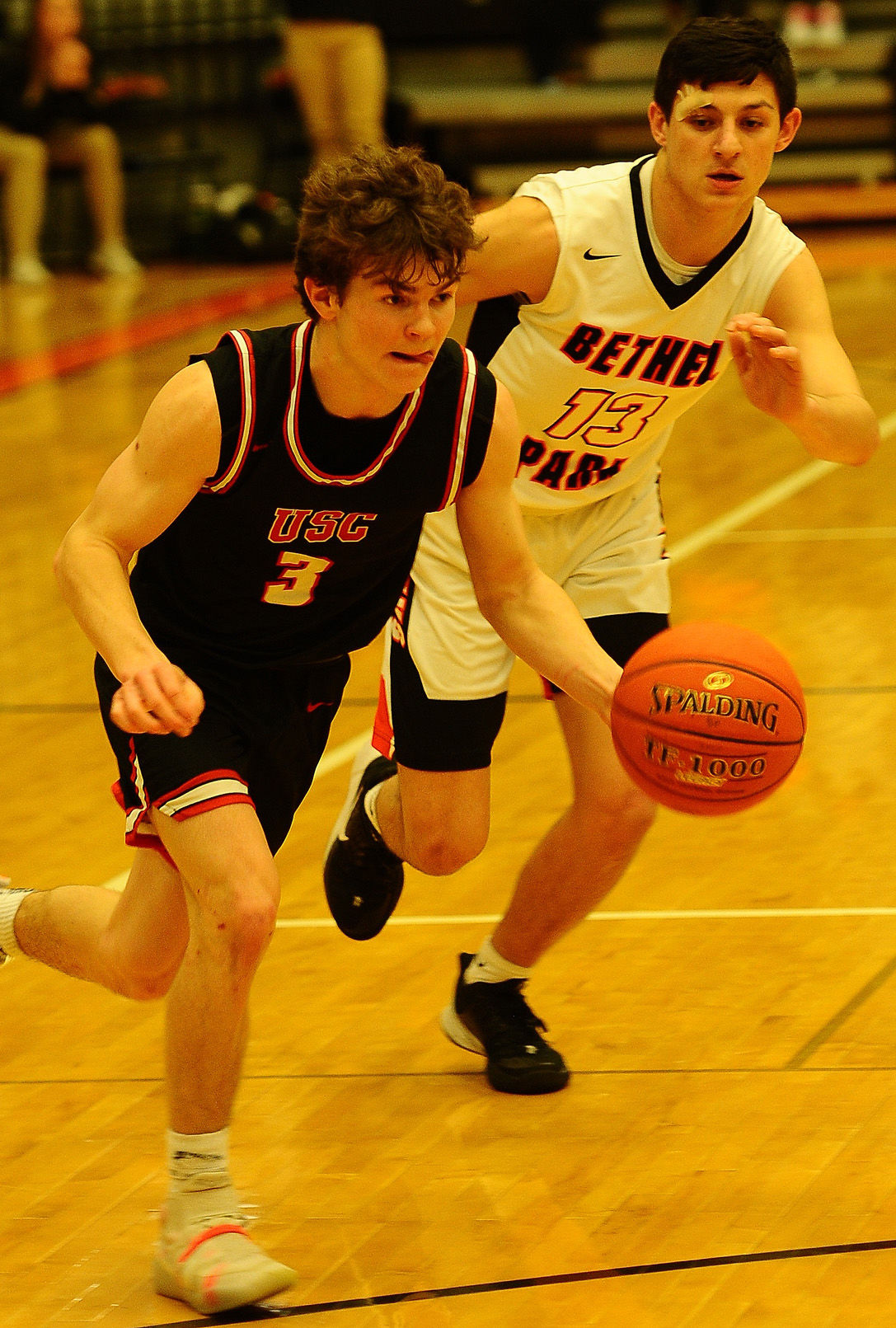 Ethan Dahlem gets a step on Anthony Chiccitt and drives to the basket during Upper St. Clair's 71-57 victory agaisnt Bethel Park. Dahlem was one of five USC players in double figures, tossing in 10 points during the win. 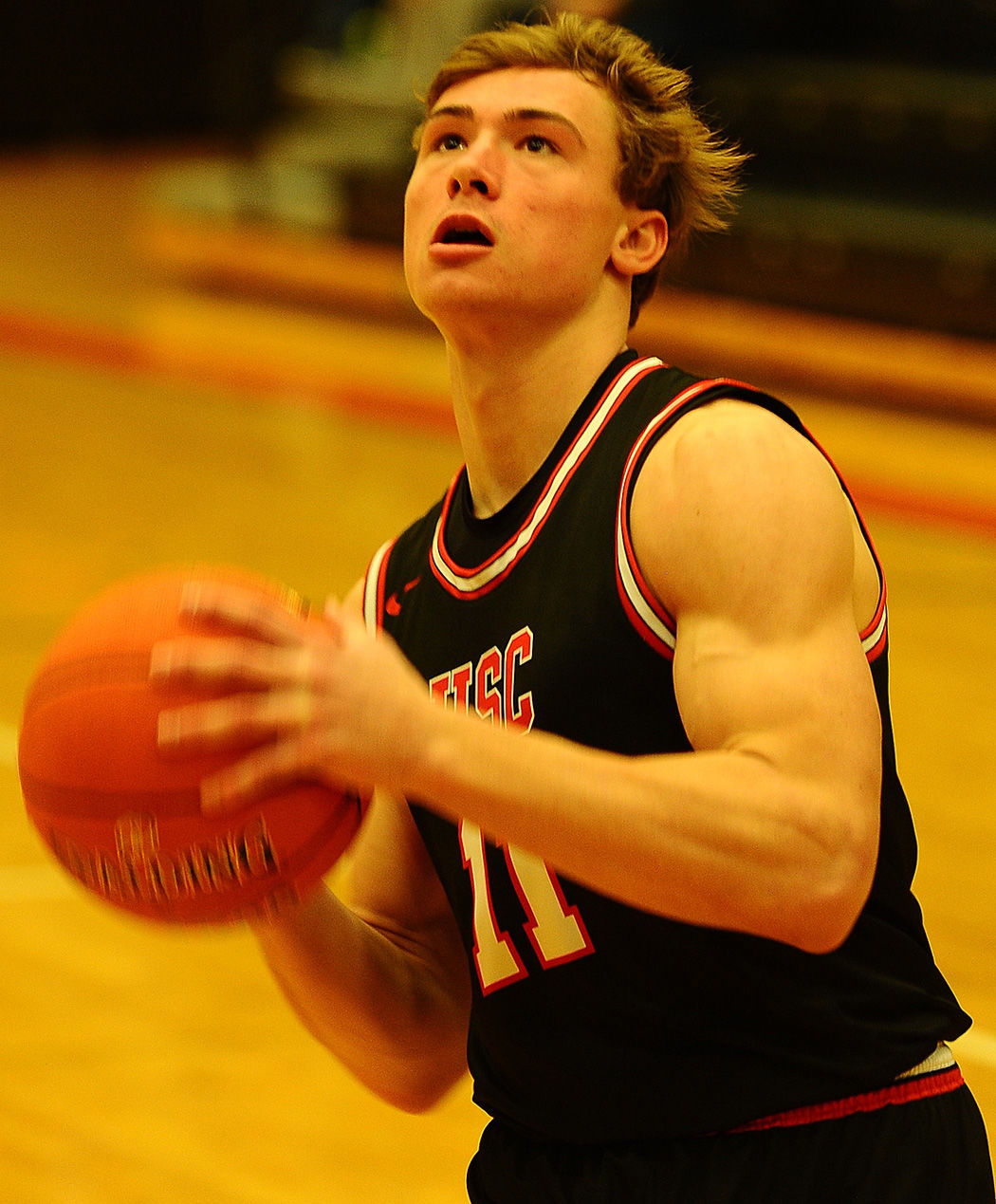 Upper St. Clair’s David Pantelis drives to the basket for a layup after making a steal against Bethel Park.

Upper St. Clair’s Luke Gensler finds an opening and drives through Mt. Lebanon defenders on his way to the basket.

Ethan Dahlem gets a step on Anthony Chiccitt and drives to the basket during Upper St. Clair's 71-57 victory agaisnt Bethel Park. Dahlem was one of five USC players in double figures, tossing in 10 points during the win.

Upper St. Clair’s David Pantelis drives to the basket for a layup after making a steal against Bethel Park.

Upper St. Clair solidified its position as one of the teams to beat in the upcoming WPIAL boys basketball playoffs following impressive back-to-back wins against rivals, Bethel Park and Mt. Lebanon.

The WPIAL announces pairings and seedings Feb. 11. The playoffs commence Feb. 14 and the championships will be contested Feb. 27 through the 29 at University of Pittsburgh’s Petersen Events Center.

With his team sitting at 18-3 as of Feb. 6, Panthers head coach Dan Holzer believes USC should not be considered a dark horse to capture the Class 6A championship.

The Panthers have been among the Top 5 in the Class 6A standings with Fox Chapel, Butler, Lebo and Pine-Richland.

“No doubt, there are a lot of good teams out there, but I do think we are up there,” Holzer said. “Even before (the Lebo) win I thought that, but maybe that’s me. We have some impressive wins so I think we’d have a shot. It’s anybody’s to win.”

If the Panthers play defense and make free throws as they did in handing Lebo a 53-48 Section 2 loss, they could be celebrating the school’s first district title since 2005. The Panthers also won a WPIAL title in Holzer’s first season at USC in 1996.

USC forced 22 turnovers against the Blue Devils, who won their fourth straight section title with a 9-1 record.

Though they surrendered an 8-0 run to begin the game and overcame a 38-34 deficit late in the third quarter, the Panthers turned the tide in the final quarter by successfully knocking down 10 of 12 free throws.

“Without question, our intensity on defense was the difference,” Holzer said. “We got a lot of turnovers and that’s hard to do against them. And, we made our free throws.”

USC followed a similar script against the Black Hawks. They fell behind 17-8, but scored 25 points in the second quarter to forge a lead that was never relinquished. The Panthers knocked down eight, 3-point field goals and converted 14 of 17 free throws.

After a three-week absence from the line-up because of a high-ankle sprain, David Pantelis has created a lift for the Panthers. The junior, who is an all-state football player at wide receiver, missed the first Lebo game and an encounter with Peters Township. Both games resulted in two of USC’s losses.

Against BP, Pantelis came off the bench to score 11 points. He sparked USC with three 3-pointers as well as a coast-to-coast layup after stealing the ball during a third-quarter run.

Against Lebo, he created four steals alone in the first five minutes. He again scored 11 points and is averaging 9.6 points and 3 steals per game.

“David’s a really good player and the kids know what he creates,” Holzer said. “Our team has really bonded together and they know what David brings to the table. He’s brought an extra confidence for sure and provided a big lift.

“I think with him back we have a chance.”

Most recently, Gensler contributed 19 points against Lebo and 13 against BP.

Providing leadership is also a key component of Gensler’s game. The junior is a captain for the Panthers.

“That shows how his teammates regard him,” Holzer said. “They think the world of him. He leads by example. A quiet leader. And, he’s really stepped up in the latter part of the season.

“Luke’s part of our balance and that’s been another real big key for us. When one guy is down, others step up. They are such great teammates and have each other’s back. Our team chemistry is amazing.”

But, so is the chemistry of Lebo and Butler.

The Blue Devils rally around Blaine Gartley and Jake Hoffman. The senior captains kept Lebo in the game against USC with 15 and 13 points, respectively.

The Golden Tornado rallies around Ethan Morton. The Purdue recruit ranks among the top WPIAL scorers with a 24-point average.

Holzer believes Butler is beatable, noting its four losses and a slim 75-71 win earlier this season against Lebo.

“If we can calm down Ethan Morton, not necessarily all his points, but his distribution because they have a lot of other guys that can make shots because he creates that,” Holzer said. “So I think the key to them is to try to minimize those guys getting multiple open looks.

“Then, offensively, we have to be sharp.” Holler added. “We have guys that can score because we have balance. We would be okay there. It would definitely be not allowing those other guys to score points. You have to try and do a lot of things to beat those guys.”

For Holzer, that sentiment especially rings true in the postseason.

“When you get to the playoffs it’s one and done,” he said. “Anything can happen, but I do like where we are and I feel we have as good a chance as anyone. That is all that you can ask for.”

Upper St. Clair and Mt. Lebanon are not the only local teams out of Section 1 to qualify for the WPIAL Class 6A boys’ basketball playoffs. Bethel Park and Peters Township join the arch rivals, who split section decisions

The top four teams in each section advance to the playoffs. Pairings and seedings will be announced by the WPIAL on Feb. 11. The district championships will be played from Feb. 27-29 at the Petersen Center.

With a 60-49 win against Baldwin, the Hawks took third in the league with a 6-4 record.

Ryan Meis, who fired in 28 points in the loss to USC, topped that production by a point, with 29 markers against the Highlanders. Tommy DiRienzo and Dolan Waldo followed with 13 and 10 tallies.

With a 62-43 win against Canon-McMillan, the Indians finished fourth in the division with a 5-5 slate. The triumph saw Colin Cote top the 1,000-point plateau for his career. He led all scorers with 25 tallies. Sam Petrarca followed with 12.

The Colts clinched the Section 2 title. They recorded a critical win, 60-56, against Montour recently. Brayden Reynolds (19), Marcello Legister (11) and Sean Banas (11) led the offensive attack. Reynolds is one of the WPIAL’s scoring leaders with his 17.8-point average.

Brandon Jakiela paces the Lions. He averages 17.5 points per game. He provided 19 markers in an 85-51 win against West Mifflin. Kade St. Ledger (13) and Andrew Franklin (11) also finished in double digits.

Despite dropping a 75-63 decision to Carlynton, Seton LaSalle clinched a playoff berth out of Section 2 in Class AAA. The Rebels are runner-up to North Catholic.

Bishop Canevin is playoff bound after a 72-67 triumph against Geibel Catholic. Dom Elliott exploded for 33 points while KeVaughn Price proved 20 markers for the Crusaders, who were undefeated in Section 2 in Class A.

On the girls’ side, BP, Lebo and USC will compete in the Class 6A tournament.

Undefeated Chartiers Valley is the defending WPIAL and PIAA champion in Class 5A.

Seton LaSalle and Bishop Canevin are ranked No. 1 in their respective Class 3A and 2A divisions.