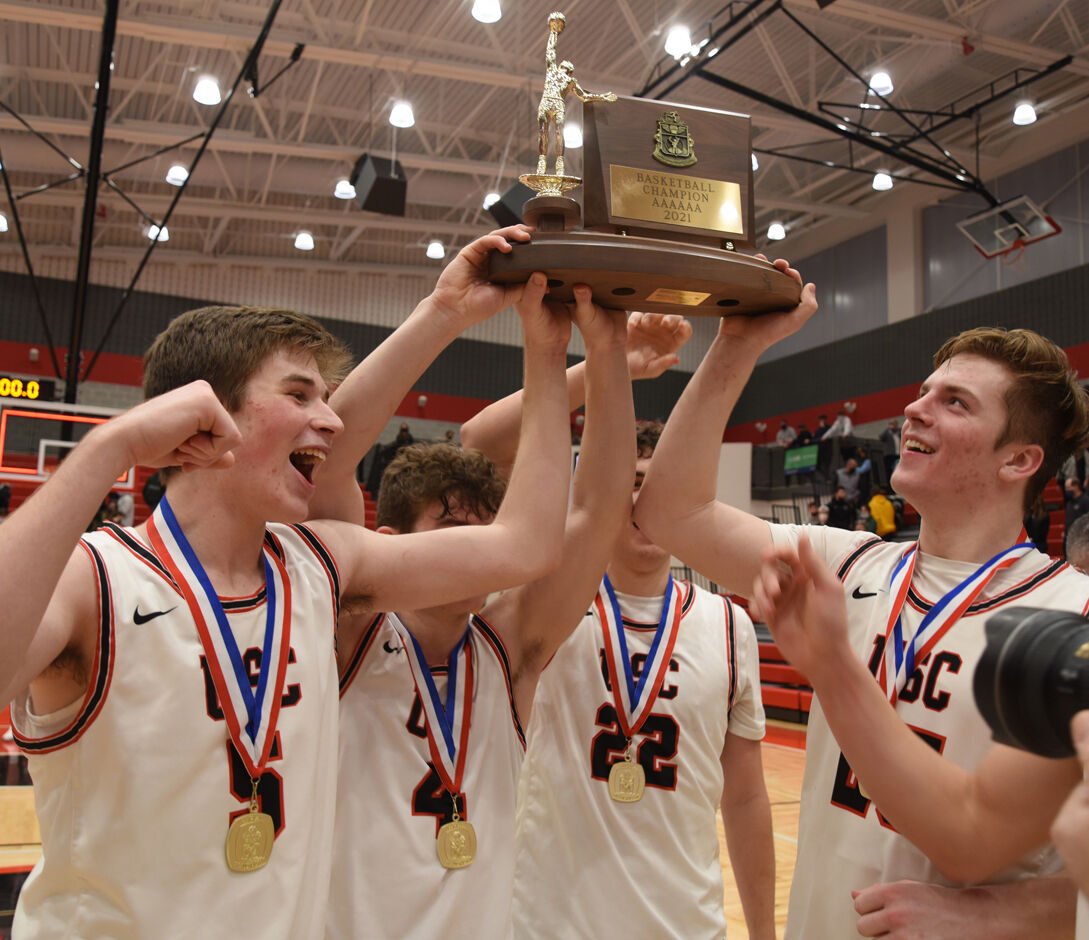 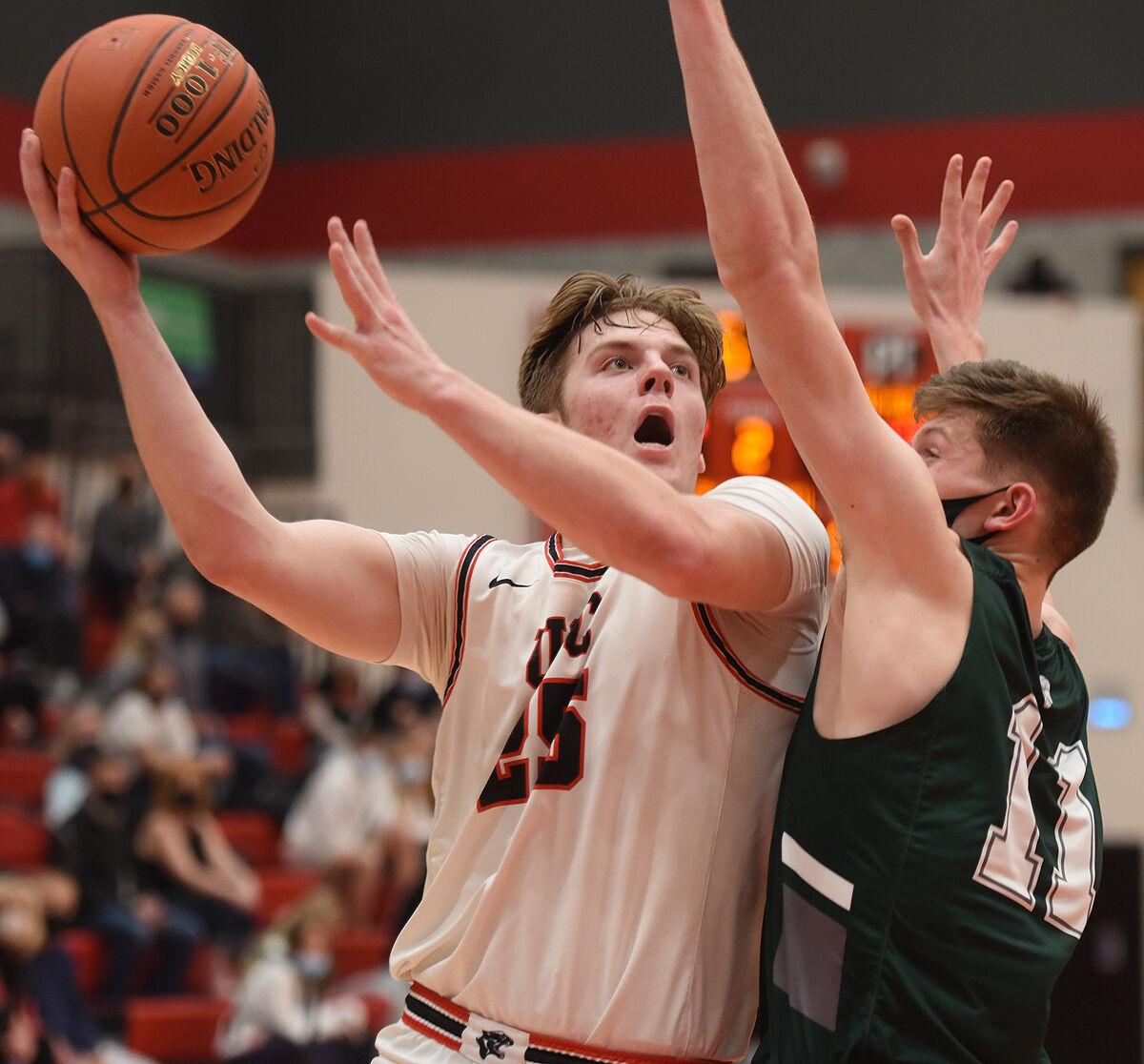 Upper St. Clair's Luke Banbury focuses on the hoop as he launches a hook shot over Pine-Richland defender Luke Shanahan during the WPIAL Class 6A championship game. 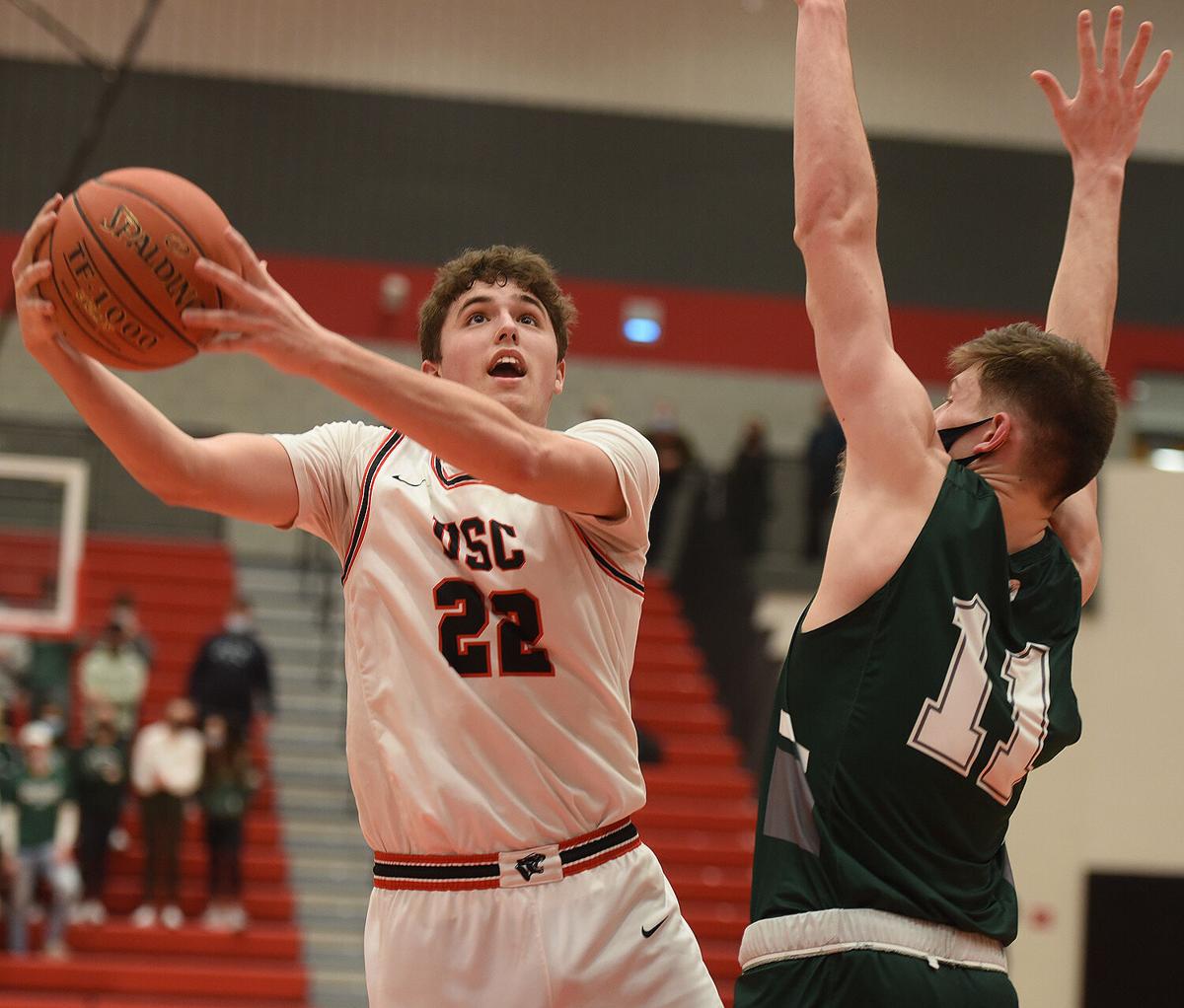 Upper St. Clair's Luke Gensler manuevers his way around Pine-Richland's Luke Shanahan for a basket during the WPIAL Class 6A championship game. 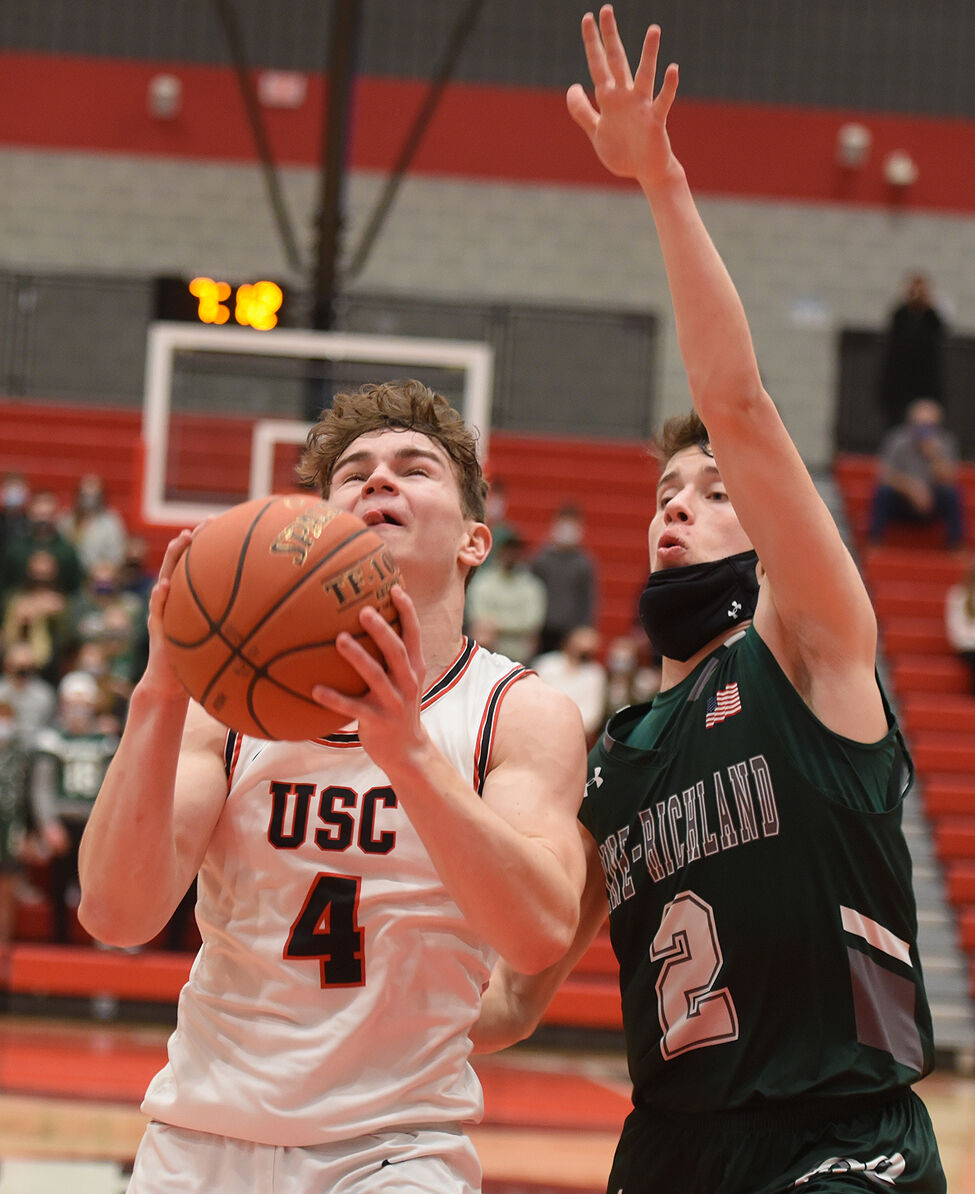 Upper St. Clair’s Ethan Dahlem weaves his way around Pine-Richland’s Andrew Swartout for a basket during the WPIAL championship game. 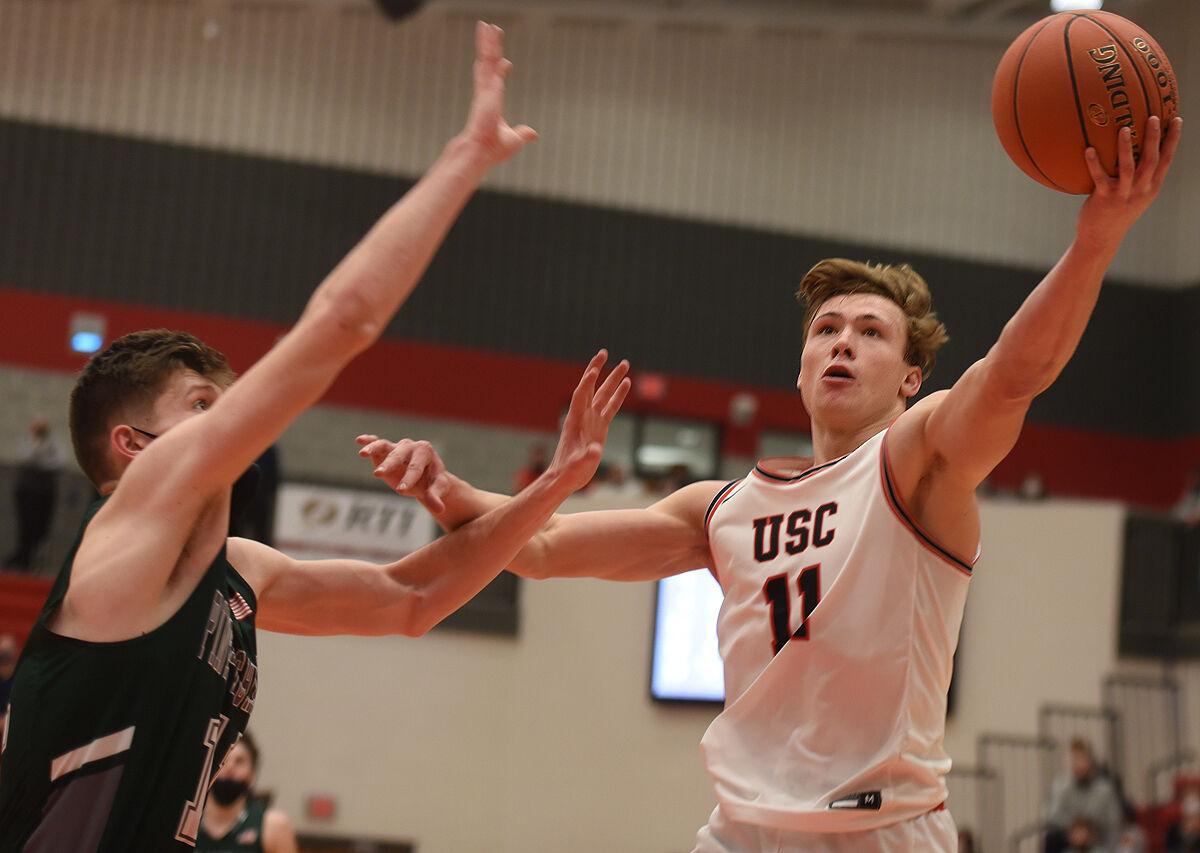 Upper St. Clair's David Pantelis brushes off a Pine-Richland defender on his way to a basket.

Upper St. Clair's Luke Banbury focuses on the hoop as he launches a hook shot over Pine-Richland defender Luke Shanahan during the WPIAL Class 6A championship game.

Upper St. Clair's Luke Gensler manuevers his way around Pine-Richland's Luke Shanahan for a basket during the WPIAL Class 6A championship game.

Upper St. Clair’s Ethan Dahlem weaves his way around Pine-Richland’s Andrew Swartout for a basket during the WPIAL championship game.

Upper St. Clair's David Pantelis brushes off a Pine-Richland defender on his way to a basket.

Upper St. Clair got its revenge in the end.

Last fall, the USC football team dropped a 34-13 decision to Pine-Richland, which went on to win WPIAL and PIAA titles in an undefeated campaign.

The Panthers claimed their school’s third WPIAL basketball title and its first since 2005. Dallas Cowboys linebacker Sean Lee spearheaded that effort. He, too, did not win a football championship.

“Football is my first love, but basketball is right there. A super close second,” said Upper St. Clair’s Luke Banbury.

“Obviously we wanted to win one in football but that didn’t work out,” he added. “Getting a second shot in basketball feels amazing. This feels great. I love this feeling.”

Banbury is one of three college-bound, football-playing starters for the Panthers. At 6-2, 225 pounds, he is a Lee-like linebacker bound for Cornell University.

Banbury scored 14 points and pulled down 11 rebounds. His football teammates Ethan Dahlem and David Pantelis pitched in with 16 and seven points, respectively.

Dahlem proved the difference, as the pint-sized point guard controlled the action — particularly in the second half.

Generously listed in the program at 5-9, he drove inside the paint and scored five layups as the Panthers opened up advantages of 37-31 in the third quarter and 53-46 in the fourth before the Rams rallied with 3-point field goals.

“I play like I’m 6-4. That’s my mentality,” said Dahlem. “They were letting us drive into the paint so we had to take advantage of that and score as much as we can.”

“Ethan has a big heart. It’s 10 feet,” Holzer said. “He’s so quick, so athletic and strong and he can leap. It’s a difficult task for teams to stop him one-on-one. When he goes in there and finishes with his left hand with people on him you just have to look at him in awe. That kid is tough as nails. A winner.”

Though he struggled with fouls throughout the game, David Pantelis emerged on top, too. One of the WPIAL’s leading wide receivers and top defensive backs for three seasons, Pantelis will play football at Yale University.

Pantelis scored all seven of his points against the Rams in the final three minutes of action, but that was when the Panthers opened up their seven-point gap.

“At some point, Dave is going to beat you off the dribble or by making shots,” Holzer said.

A 3-pointer by Andrew Alexander shortened Rams’ deficit to 54-53 with 26 seconds remaining. The Rams, however, missed a pair of potential game-tying field goals in the final 12 seconds of play.

Alexander finished with 13 points while Joey Dudkowski followed with 16 for the Rams, whose starting lineup also features two football standouts in Eli Jochem and Joe Petcash.

“We had enough to win,” Holzer said. “I had confidence in my team that we would make enough plays to win no matter how close it got.”

USC’s Luke Gensler and John Sukernak kept the Rams at bay with their critical plays.

Sukernak finished with seven points. He buried a pair of 3-point field goals to stake USC to a 23-19 halftime lead.

“How critical was he,” said Holzer of Sukernak. “He’s worked so hard. He’s a great example of a program player, waiting his turn.”

Since his freshman year, though, Gensler has been a contributor. He’s started since his sophomore year. He is the Panthers’ dedicated basketball player.

“Luke does everything for us and he is so unselfish. His strongest attribute is that he is a team player. He does things on a high level. He can play the point of the two (position) in college because he can shoot. He can handle the ball and he’s smart.”