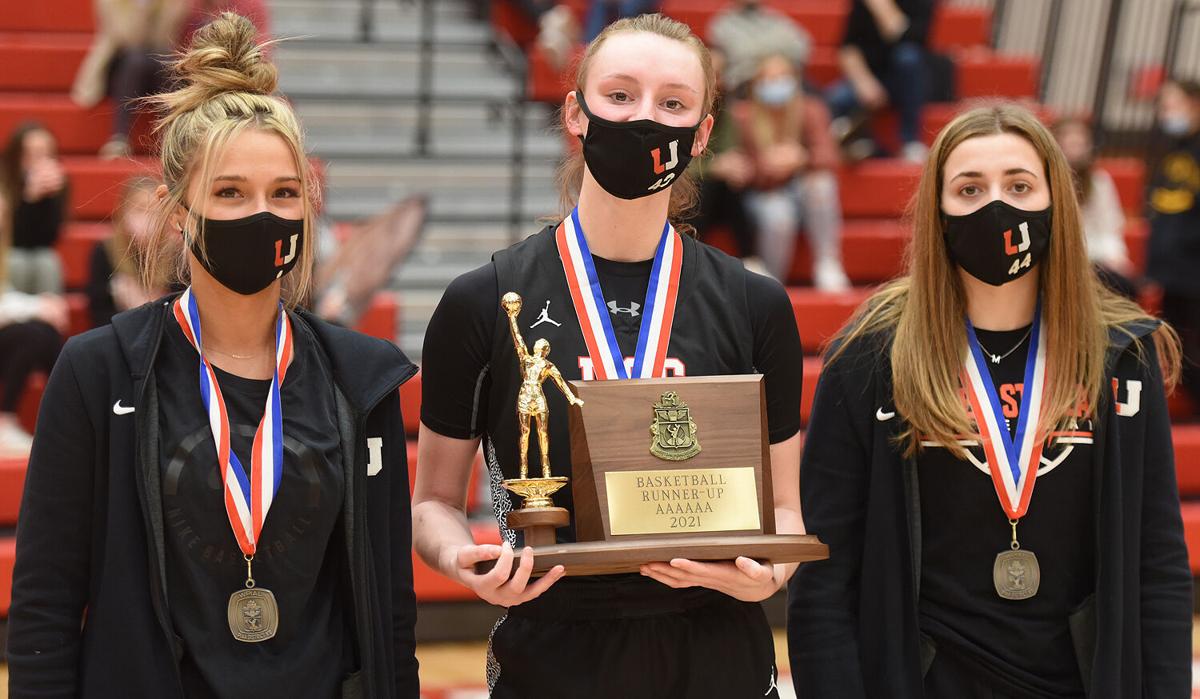 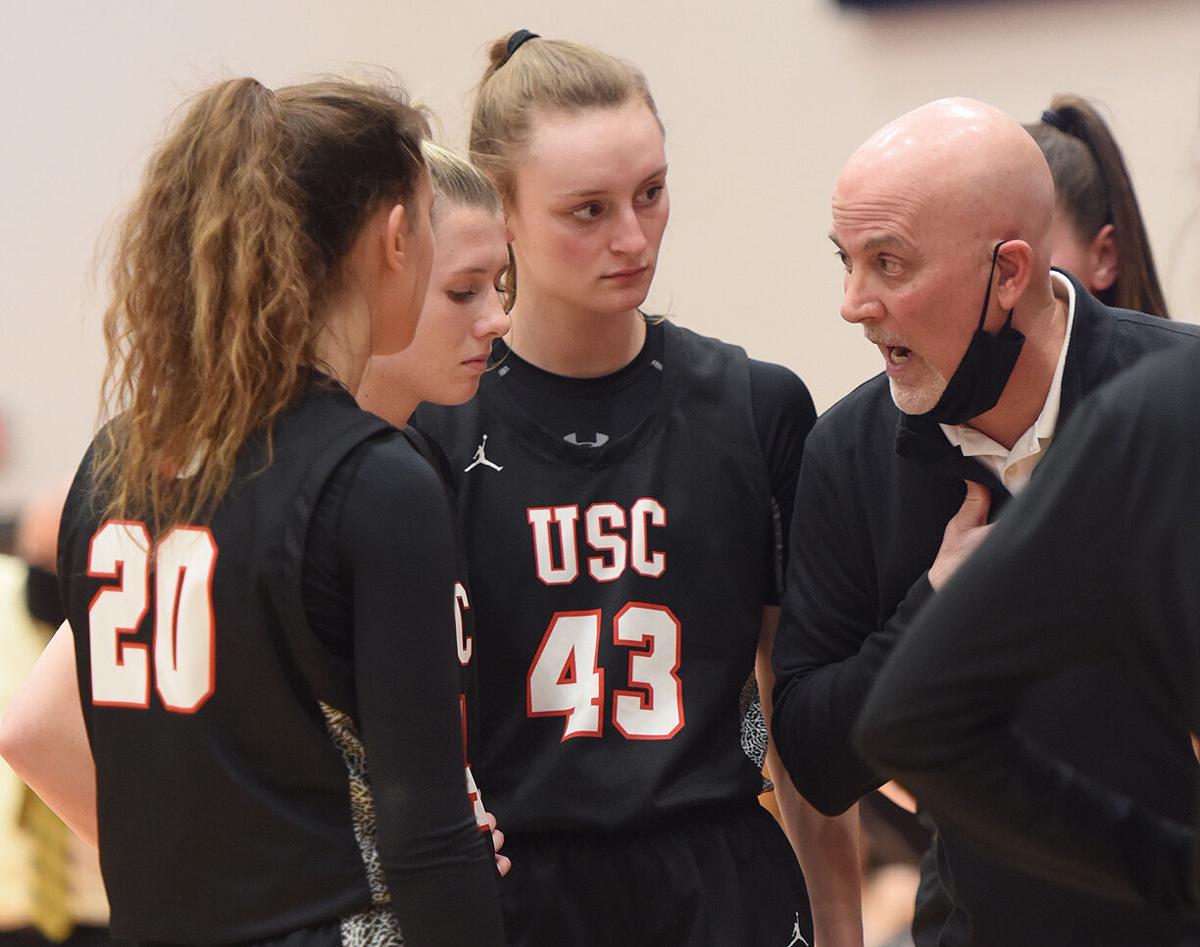 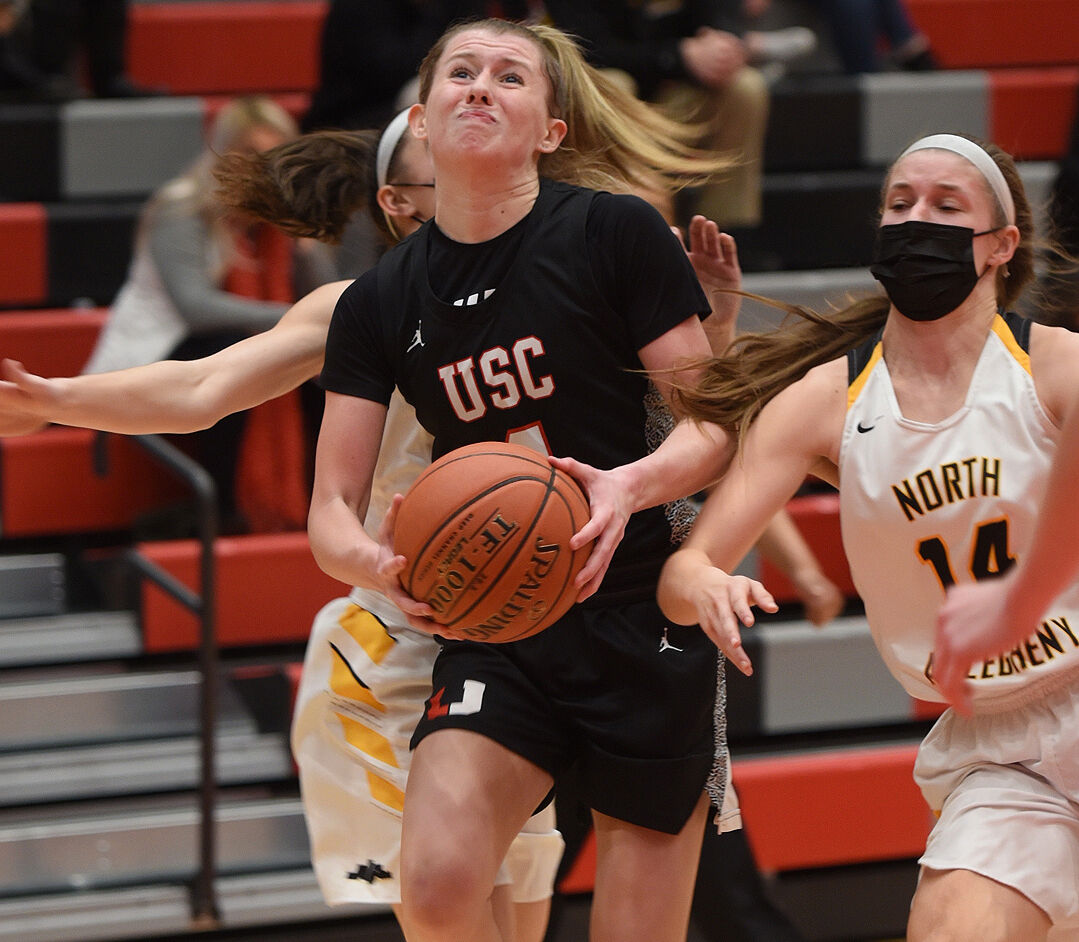 Upper St. Clair's Alexandra Prunzik drives to the basket ahead of North Allegheny's  Cam Phillips during the WPIAL Class 6A championship game. 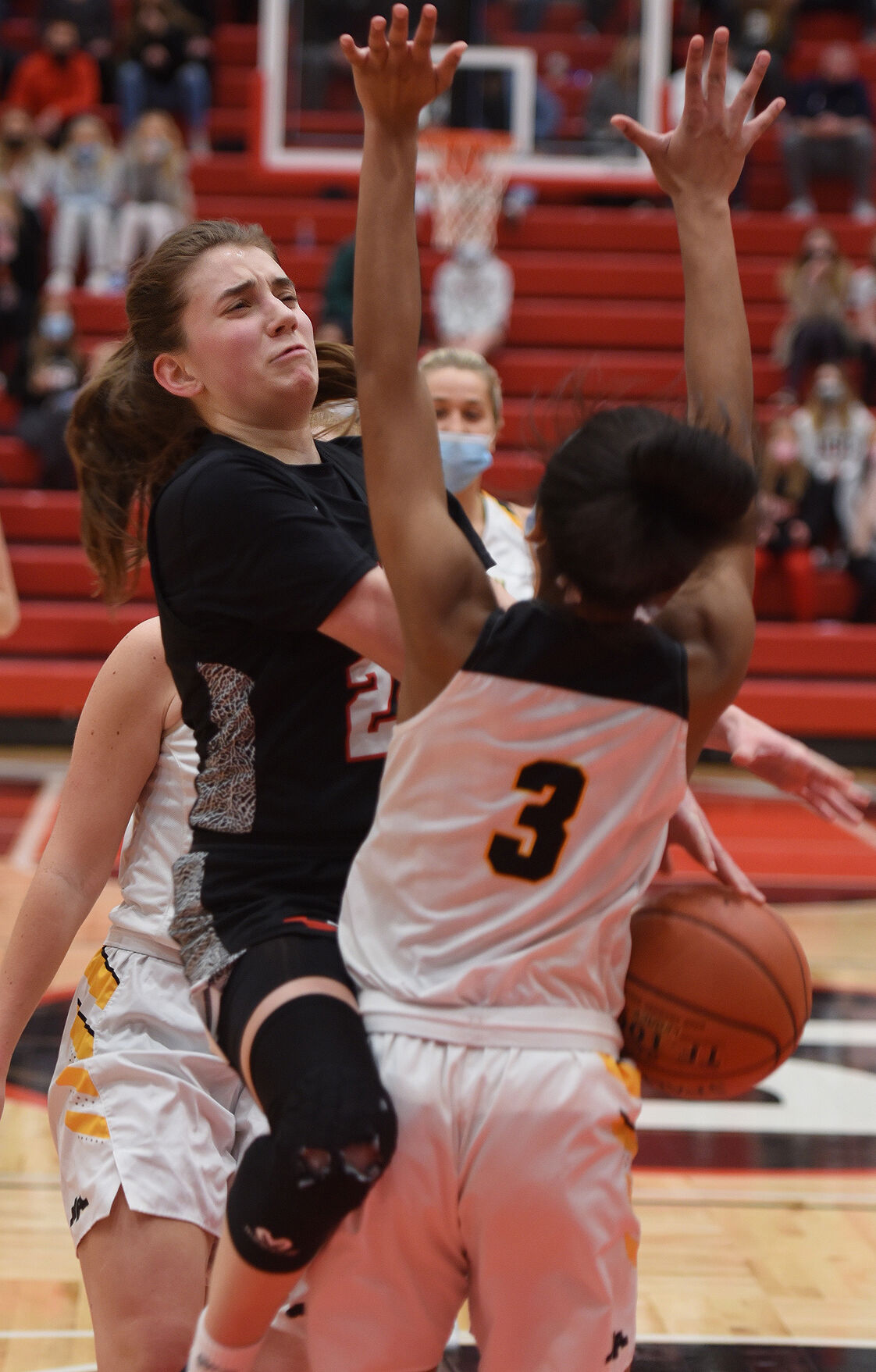 Upper St. Clair's Ava Keating runs into a road block as she attempts to drive to the basket through the defense of North Allegheny's Jasmine Timmerson during the WPIAL Class 6A championship game. 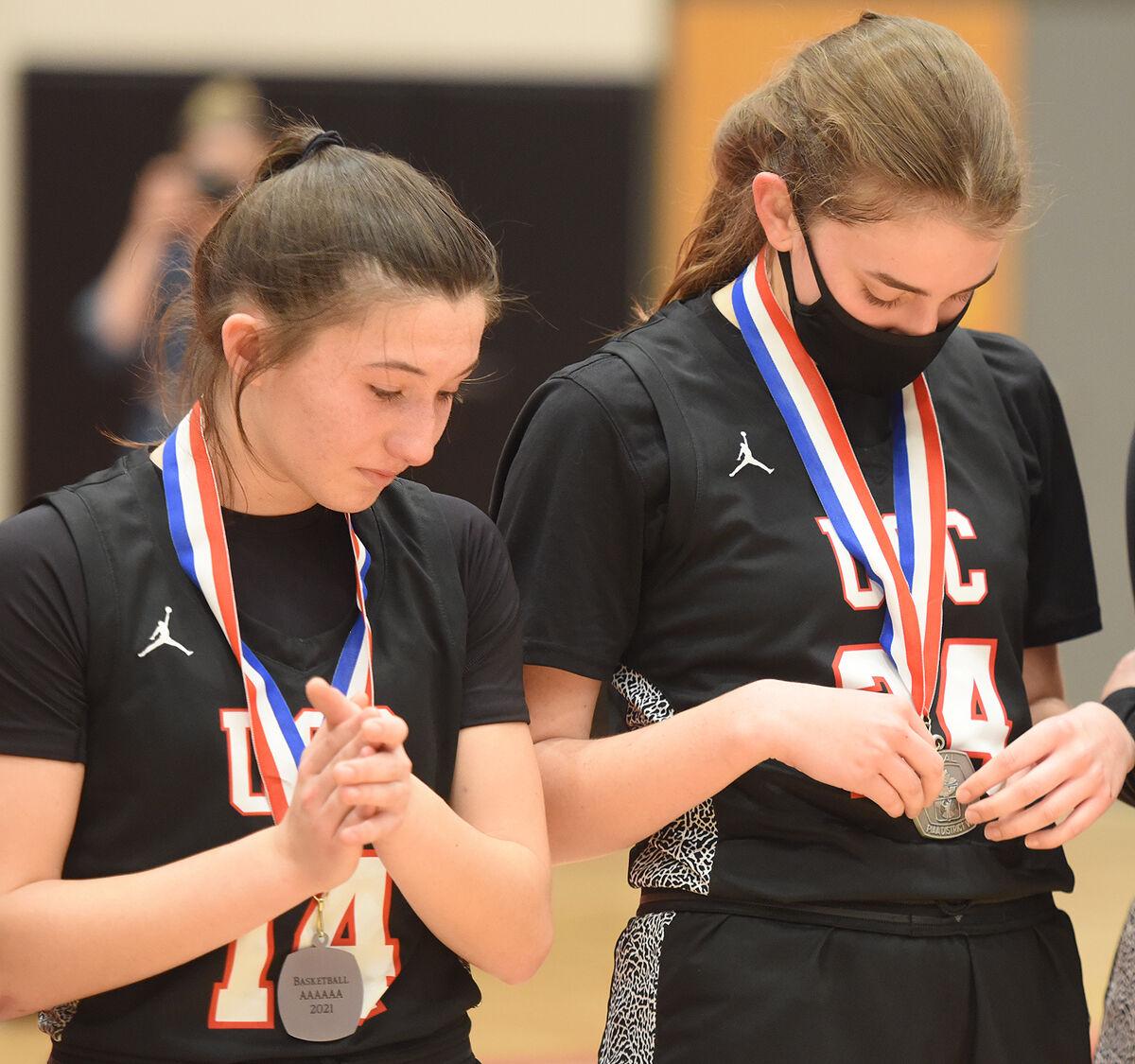 Upper St. Clair's Sam Prunzik and Ava Keating bow their heads after the Panthers fell to North Allegheny in the WPIAL Class 6A championship game.

Upper St. Clair's Alexandra Prunzik drives to the basket ahead of North Allegheny's  Cam Phillips during the WPIAL Class 6A championship game.

Upper St. Clair's Ava Keating runs into a road block as she attempts to drive to the basket through the defense of North Allegheny's Jasmine Timmerson during the WPIAL Class 6A championship game.

Upper St. Clair's Sam Prunzik and Ava Keating bow their heads after the Panthers fell to North Allegheny in the WPIAL Class 6A championship game.

“It’s always very hard for me to say goodbye,” Serio said. “These seniors have helped turn this program around. I appreciate all they have meant to me and this team.”

During their four-year tenure, the quintet turned a so-so team into one with realistic championship aspirations.

Simply listed on the varsity roster as freshman, USC posted a 5-5 section mark and a 13-11 overall record four winters ago. As sophomores the group went 7-7, but the team took a step backward finishing 11-12 overall.

As juniors, they spearheaded USC’s surge. The Panthers finished among the final four teams in the district and qualified for the state playoffs.

This winter, USC finished 6-0 in section and tied with Mt. Lebanon for first place. The regular season featured a series sweep of rival Bethel Park. The Panthers ended the year with a 15-3 record.

“This year has been special and I am just so proud of my team and staff,” said Serio.

“It seems when your season ends people just want to talk about next year but we will have plenty of time to talk about that. This year is still fresh in my mind. What this team has accomplished is deserving of praise and appreciation.”

The Panthers earned the second seed in the WPIAL tournament and did all they could even though starters Mia Brown, who injured her knee, and Ava Keating, who injured her shoulder, were sidelined.

“This was a special group,” Serio said. “They have stepped up all season and have embraced the opportunity that was given to them. The chemistry on this team has helped us over achieve.”

Camaraderie nearly catapulted the Panthers to victory against NA. The Tigers’ experience, though, propelled them to their second straight championship and fourth title since Class 6A was formed in 2017.

In fact, USC forged a 12-11 lead against the Tigers after one quarter. The Panthers trailed 29-24 at intermission.

“We played well for 16 minutes but just didn’t sustain it,” Serio said.

NA forced 17 turnovers. Many of the steals turned into easy layups as the Tigers outscored the Panthers 23-8 in the third quarter and 41-12 in the second half.

“There aren’t words to describe what they did,” said North Allegheny coach Spencer Stefko. “That was just kids playing and chipping away until the dam breaks.”

NA converted 26 of 49 shots from the field and 10 of 15 from the line. The Tigers turned the ball over just four times.

USC converted just 13 of 37 attempts from the field and 4 of 20 from beyond the arc.

Prunzik and Paige Dellicarri led the offensive attack. Each finished with eight points.

“The game didn’t go as we had hoped,” Serio said. “I knew how good they were and that we could be overmatched.”

That may not be the case in 2022 as many of USC’s standout players return.

Dellicarri, leading scorer Kate Robbins, who average 15 points per game, and Sam Prunzik all started this season as sophomores. Molly James was a junior starter.

In addition to Brown and Keating, who are also sophomores, USC returns Kate Moore. The freshman saw plenty of action as one of the Panthers’ first subs off the bench.

Other players who will return after contributing to this year’s campaign are juniors Ileana Berkoski and Jaclyn Martinelli; sophomore Madeline John and freshmen Libby Eannarino, Maeryn Mannix and Virginia Gaither.