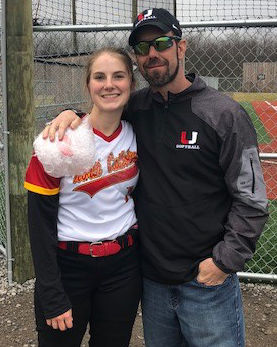 Pictured is the 2020 Upper St. Clair High School softball team. The Panthers, like many other squads, have had their spring sports seasons suspended because of the coronavirus pandemic sweeping the nation.

Pictured is the 2020 Upper St. Clair High School softball team. The Panthers, like many other squads, have had their spring sports seasons suspended because of the coronavirus pandemic sweeping the nation.

By day, Bill Aguglia operates his own State Farm Insurance Agency in Lower Burrell. After the North Hills resident completes his work, he transitions to his duties as head coach of the Upper St. Clair High School girls softball team as well as his parental duties.

During these uncertain times surrounding the coronavirus, Aguglia also sees the apprehension in his athletes’ eyes as their season has been postponed for at least another two weeks. He said he sadly watched as they teared up and “had a good cry” after learning their spring training trip last week to Tennessee had been canceled.

“It’s affecting certain kids worse than others,” he said. “It’s weird with all that is going on and so many different opinions. It’s crazy for all of us and these are uncertain times. I really feel for the players because they have put a lot of blood, sweat and tears into this. They are a good group of kids.

“We have to just keep the faith and hope we all get through this.”

Aguglia has been unable to practice with his Panthers because the WPIAL and PIAA has mandated all activities cease during the state-wide school shutdown, he has been able to work out daily with his daughter. The senior third baseman plays for North Catholic and has earned a scholarship to Walsh University.

“It’s been tough not being with my team,” Aguglia said.

“It’s driving me crazy, but I have been able to get my fix by working out with my daughter. A driveway and a tee go a long way.”

This spring, the Panthers were expected to go a long way. USC returns eight starters from a 13-7 team that was one pitch away from upsetting North Allegheny in the WPIAL quarterfinals. With the taste of that loss in their memories, USC has worked to prepare for its second playoff run in 20 years.

“Coaches tell people all the time how their players work so hard and I believe that, but I ask a lot of my team,” Aguglia said of the preseason workouts that have dated to August and were voluntarily attended by 17 to 19 players regularly. “We are a family. It’s obviously a special group with great leaders.”

An outfielder, Swigart will play at West Liberty. The all-section and all-state selection batted .426 with 20 runs. She recorded a team-high 34 RBI and seven doubles last year.

Malone starts at second base. The University of Wisconsin-Oshkosh recruit led USC in hitting with a .518 average. She also ranked first in triples (3), walks (10) and runs scored (25).

Orendi is USC’s ace. The all-section performer posted a 10-5 record with 86 strikeouts and a 2.48 ERA. She is a John Carroll recruit.

Stevenson will not play in college as she earned an Air Force ROTC scholarship. She is considering Pitt, Penn State or Temple to study engineering. She batted .355 with 10 walks and 25 runs scored.

Since he arrived at USC after a successful coaching career at North Hills, Aguglia said the team’s goals have been to win a section and WPIAL championship. First order of business, however, is the season opener.

“Our first goal is to play. We are holding out hope that that can happen,” he said.

Aguglia laid out different scenarios such as an abbreviated season or playing weekends as the travel softball teams do. Also, with April and its showers approaching, he added that for the past two years, the Panthers have played four to five games a week.

“So it can be done because in softball there are no pitching counts,” he added. “Honestly, I feel even if we get started at the end of April, we can get a season in. I’m just grateful that they haven’t canceled the season altogether yet.”

The postponement also means USC’s May 1 exhibition game against North Catholic at No Off Season Complex in Valencia is still a go. It is senior recognition day for the Trojans. That means Aguglia and his wife, Gloria, would be able to be present for his daughter. His son, Cameron, who was a standout wrestler with over 100 wins at North Hills, will umpire.

“So, we have a lot riding on that game,” Aguglia said. “I pray every day we get to play. This thing is crazy for all of us.”