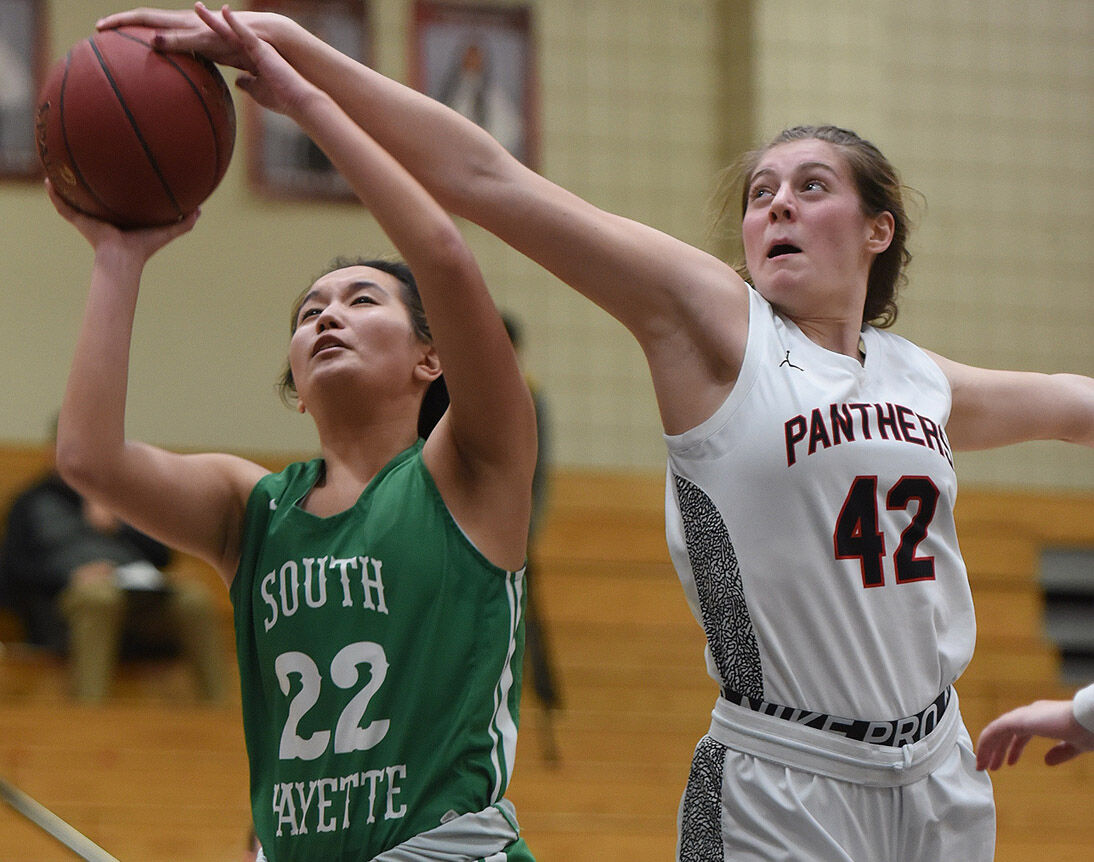 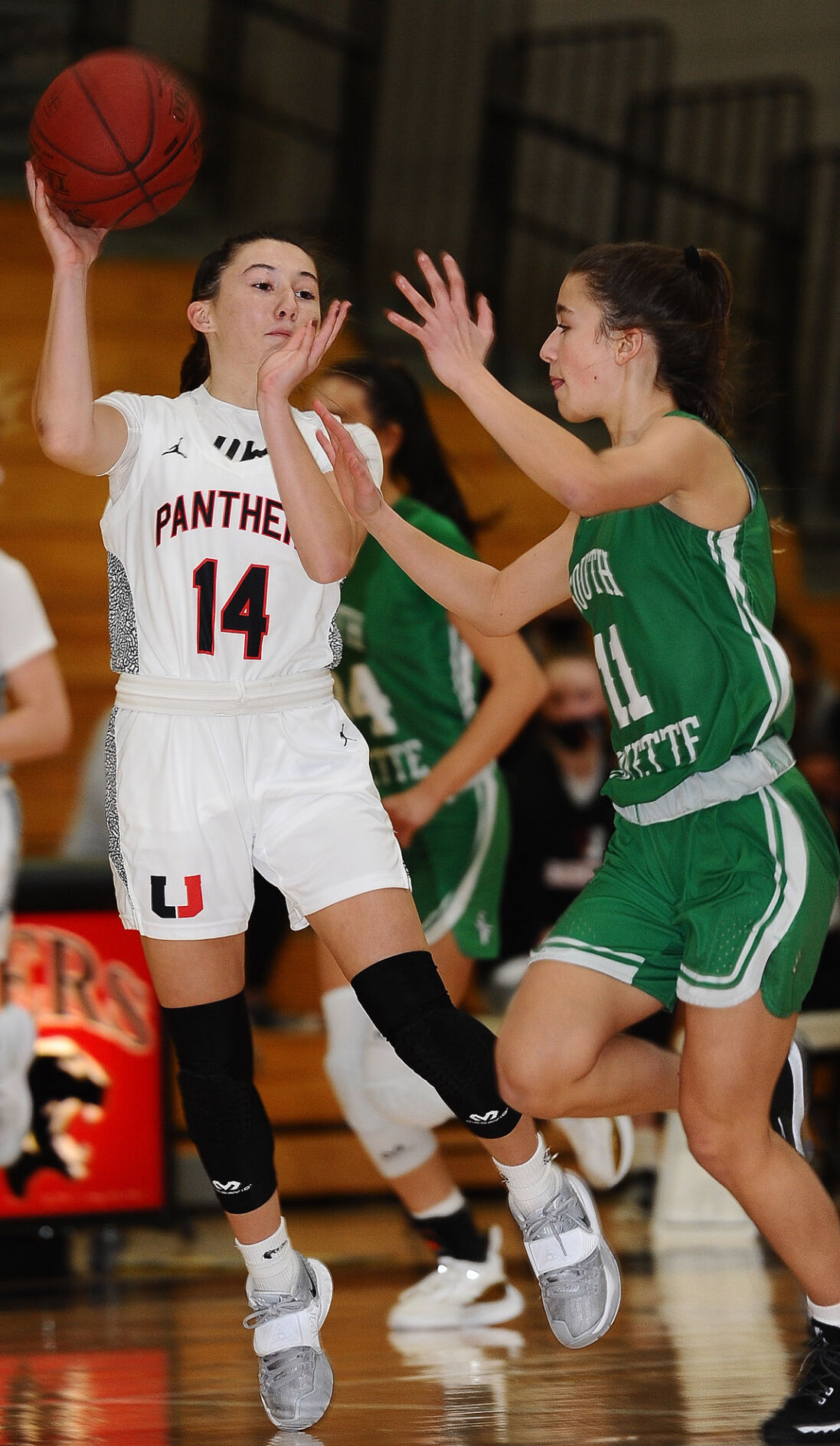 Upper St. Clair's Sam Prunzik looks to pass to a teammate during a recent game against South Fayette. 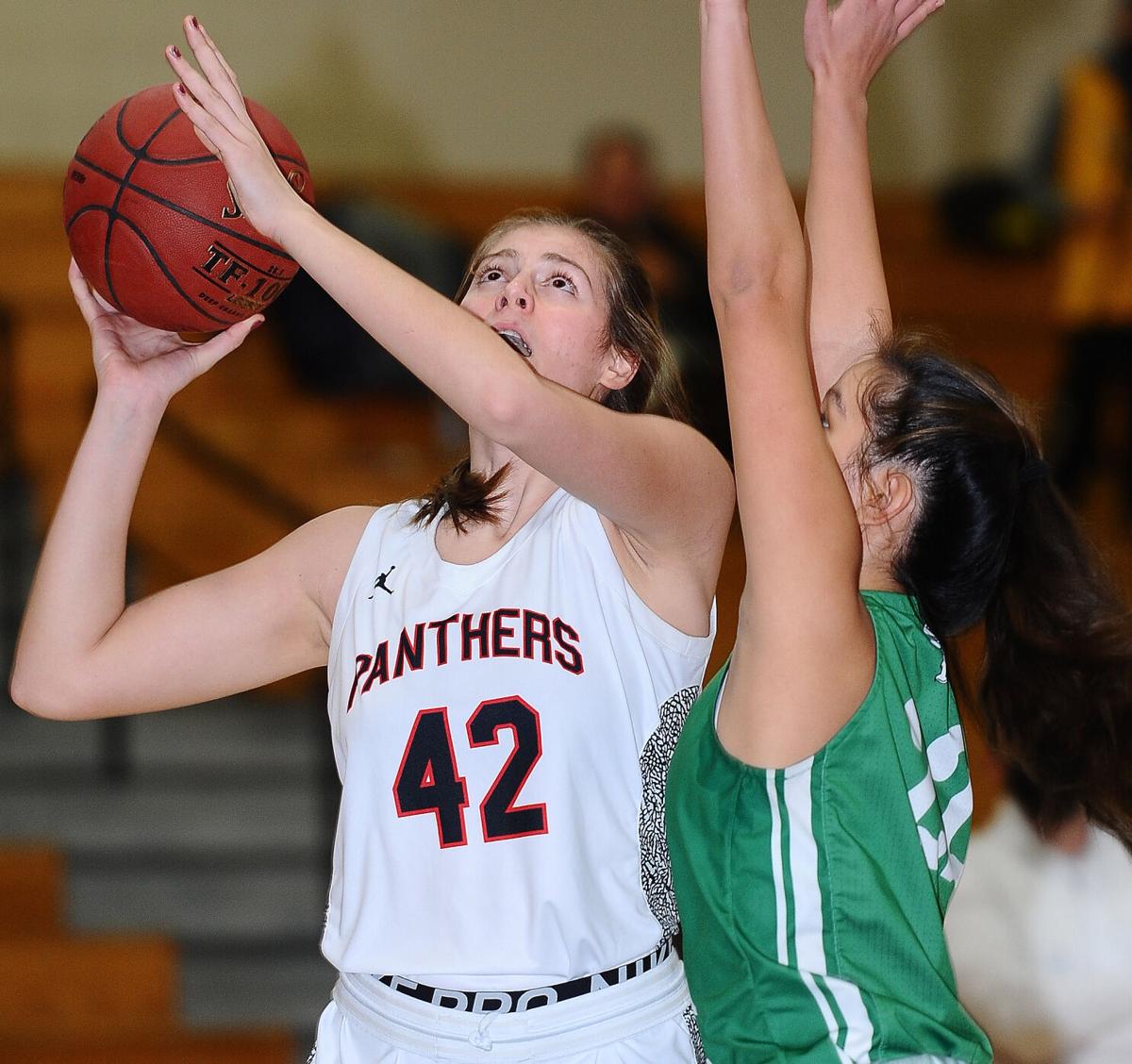 Upper St. Clair's Katelyn Robbins (42) maintains her focus on the basket during a recent game against South Fayette. 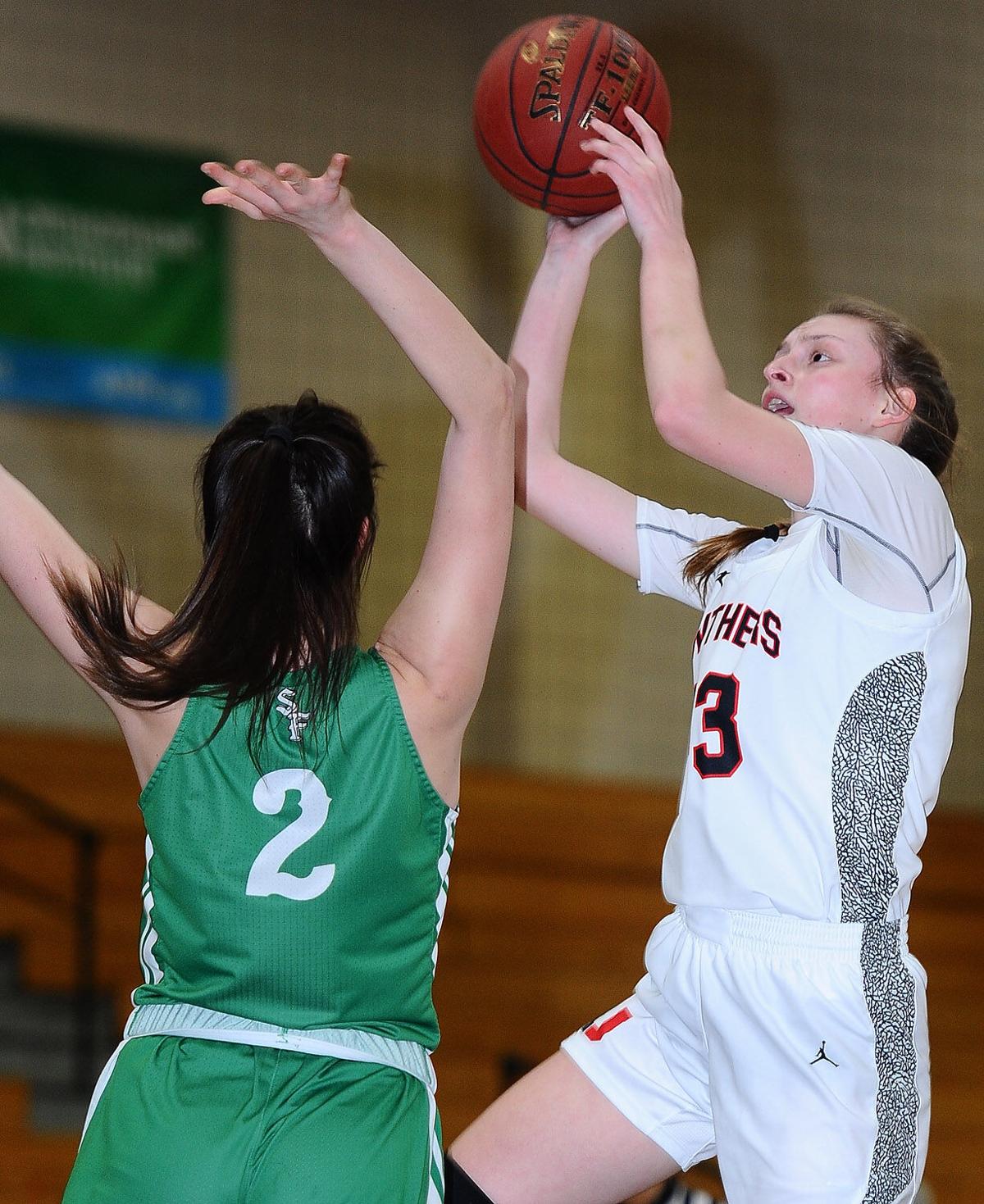 Upper St. Clair's Sam Prunzik looks to pass to a teammate during a recent game against South Fayette.

Upper St. Clair's Katelyn Robbins (42) maintains her focus on the basket during a recent game against South Fayette.

If there is a science to basketball, then the Upper St. Clair girls team earns high marks in the subject.

The Panthers are 8-1 overall after coming from behind to beat South Fayette, 54-47. They also improved to 3-0 in Class 6A Section 2 after defeating rival Bethel Park, 49-47.

“Our chemistry is some of the best I’ve ever been a part of,” said Pete Serio, who has coached at Peters Township, Mt. Lebanon and Bishop Canevin before spending the past seven seasons as USC’s head coach. “Our team is so unselfish and they enjoy playing together.

“There is no secret to the chemistry,” he continued. “These players get the team aspect of the game. It has been what keeps us in games.”

At USC, everyone contributes.

Though Kate Robbins and Paige Dellicarri typically are the leading scorers, averaging double digits an outing, the Panthers get production out of all starters and key subs off the bench.

Seven players scored in USC’s win against Bethel Park. Robbins and Dellicarri led with 13 and 12 points, respectively. Abby John and Alex Prunzik finished with seven points each while Molly James pitched in six. Sam Prunzik and Kate Moore, a freshman, also contributed to the attack.

While six players contributed to the offensive attack against the Lions, Robbins rallied the Panthers. She scored 10 of USC’s 14 third-quarter points, including the basket that tied the contest at 39-39, and erased an 11-point halftime deficit. Robbins scored the first four points of the final quarter as the Panthers took a lead 43-39 lead they would not relinquish with under five minutes to play.

The Panthers are not just focused on offense. They do the little things that produce victories.

USC out-rebounded BP, 32-17. Robbins cleaned the glass 10 times. Against the Lions, most of Robbins points were scored on put-backs shots. She finished with 15 rebounds.

“A rebounding advantage is what helps us win,” Serio said. “Against Bethel, we had to take advantage of our size. One of our keys is limiting team’s second chances.”

The Panthers also play defense. They are limiting the opposition to 42.6 points per game.

John’s coverage was a difference maker against BP.

Though Olivia Westphal finished with a game-high 22 points, the Duquesne recruit converted 10 of those points from the charity stripe. Westphal made five shots from the field, including a pair of 3-pointers in the final quarter as the Hawks rallied from a 13-point deficit.

“Liv is just such a great player and Abby did as good a job on her as you can do,” said Serio. “We were very proud of Abby. She helped make a difference.”

Perimeter play also paved the way for victory for the Panthers.

Against South Fayette, USC recorded four, 3-pointers, three from Dellicarri and one from Alex Prunzik. Each had one long-range conversion in the final four minutes of action.

Against BP, the Panthers buried six, 3-pointers, four in the third quarter. James and Sam Prunzik staked the Panthers to a 38-26 lead but back-to-back long-range shots from Dellicarri advanced the advantage to 44-31.

“The threes by Paige, Molly and Sam in the third were so key for confidence,” Serio said. “Bethel was trying to make a run and those shots gave us back our cushion which we obviously needed in the fourth quarter.”

Poor shooting from the line (5 of 20) saw USC’s edge slip away as Westphal and Emma Dziezgowski led a BP rally. Dziezgowski, who finished with 13 points, pulled the Hawks to within 48-47, before Dellicarri iced the contest with a free throw in the final 10 seconds.

“My wife,” said Serio of Suzie McConnell, who is a two-time Olympic medalist and his assistant coach, “always says games are won and lost at the free throw line. We for sure have to do a better job in the future if we want to keep on being successful.”

Maddie Webber scored 15 points, Jessica Stabile chipped in 12, while Yater and Giuliana Gaetano each added 11 points for the Lions.

The Colts were led by 21 points from Perri Page, while Helene Cowan added 18 and Aislin Malcolm chipped in 11 en route to scoring her 1,000th career point.

Malcolm scored a team-high 16 points against West Allegheny, while Page poured in 14 and Cowan scored 11. The Colts dominated Lincoln Place 100-49 in a Class 5A Section 1 game. Malcolm led the attack with 24 points. Page and Hallie Cowan followed with 19 and 17 points, respectively.

Mt. Lebanon, however, fell to Penn Hills, 54-42. Ashleigh Connor led the Blue Devils with 22 points and Morgan Palmer followed with 11.

The Blue Devils rebounded with a 72-56 win over Oakland Catholic.