Upper St. Clair’s Jason Zhang surfaces for air during the butterfly leg of the 200-yard individual medley race during a dual meet against North Allegheny. 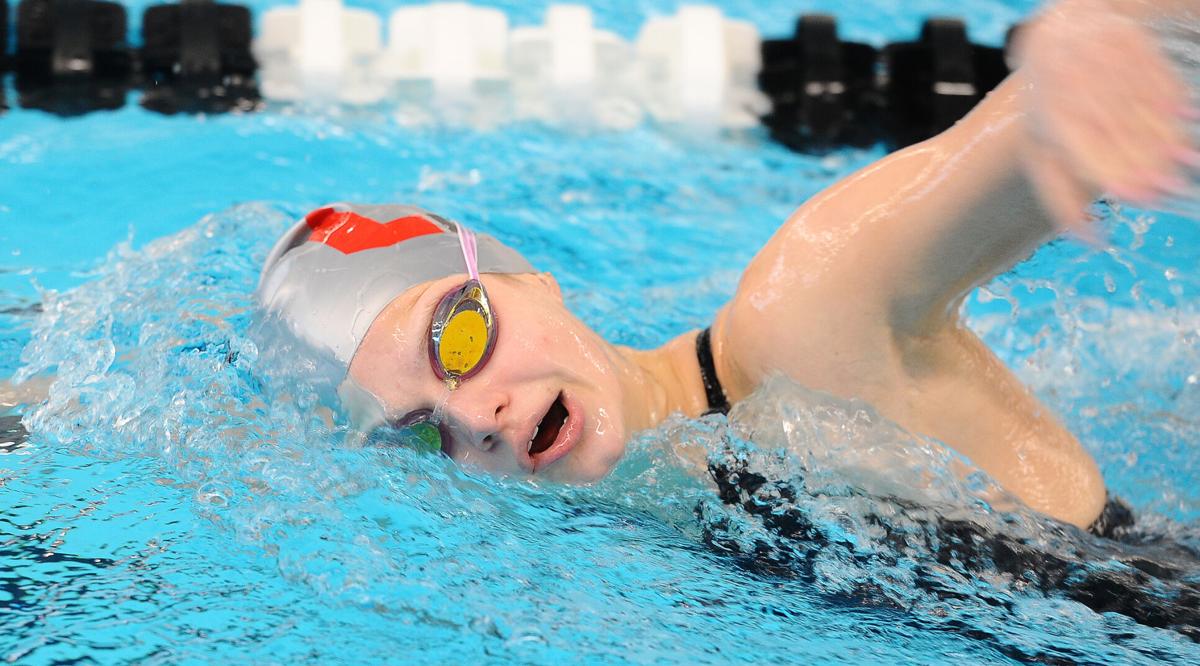 Upper St. Clair’s Jason Zhang surfaces for air during the butterfly leg of the 200-yard individual medley race during a dual meet against North Allegheny.

On March 6 and 7, Upper St. Clair is set to welcome the best the WPIAL has to offer as part of the district swimming championships.

Because of the COVID-19 pandemic, the University of Pittsburgh’s Trees Pool was off limits to use as a facility for the WPIAL championships.

With hospitality, however, comes a waves of responsibility for the Panthers as they and all athletic teams continue adopt and follow protocols that mitigate the transmission of the disease.

“When we told the kids we are hosting the WPIAL and that the championships will be live streamed they understood that we would be under a microscope and that people better see that we are doing things the right way,” said USC head coach Dave Schraven. “Our kids are really adaptable and they have been real great about following the rules and the constant reminders.”

Upper St. Clair’s state-of-the-art facility, which features an eight-lane, 25-yard competition pool plus a four-lane, 25-yard warm water special-use pool and diving well, will get a major debut as part of the event.

“If there was a better facility with taking Pitt out of the equation, then this is where I would want (the championships) to be,” Schraven said. “We are excited to get a big competition at the best venue available. The vast majority of the WPIAL has not seen our facility yet, so we are thrilled for them to come in here and swim in this pool.”

For USC, however, there will be little home-pool advantage, as no spectators will be admitted for the event.

There is, however, some pressure on the Panthers to perform.

“Kids go to meets at different pools all the time so whatever edge we have may be more psychological than anything,” said Schraven. “Our swimmers push off the blocks every day. They turn on these walls. So from a mental side, we may have a this is our place and we need to defend it kind of attitude.”

In the meet, 14 pool records fell. The Panthers shattered eight of those marks.

“Even though we lost the meet, we had great performances,” said Schraven. “We won five events against NA.”

The Tigers, who are expected to win the WPIAL boys and girls titles, will be challenged to defend their championship by both the Panthers and Seneca Valley. The Raiders also beat NA in a dual meet this winter.

Schraven said he believes Seneca Valley is the “slight favorite” with NA and USC closely behind.

“All three teams are so close,” he said. “Only a handful of teams can impact the results. So it’s going to be one of more exciting battles we’ve seen in a while.”

It has been 10 years since USC’s dramatic victory in the WPIAL championships. The Panthers edged NA and clinched the Class AAA title by winning the final race, the 400-yard freestyle relay.

USC’s dual-meet win against the Tigers nearly equaled the drama of 2011. Down by 14 points after the first-half of competition, the Panthers won five of the final six races to clinch the victory.

Ryan Senchyshak and Ganesh Sivaramakrishnan won the 100 free and backstroke races. The duo combined with Jason Zhang and Ethan Neal and shattered the pool record in the 200-free relay with a winning time of 1:28.53.

Josh Matheny won the 100 breaststroke in a record 54.60 time. He also anchored the victorious 400-free relay team of Senchyshak, Neal and Jason Wang. The foursome clocked in with time of 3:14.53, well off the record pace set by Seneca Valley Jan. 9.

“We knew it was going to be competitive but early on in the meet, we lost a number of close races that I was not happy about,” said Schraven. “I told the boys, sternly, that you can’t lose all these close races and expect to win.”

In the second half of the meet, USC battled, especially for the fourth and fifth places. These spots typically are determined by hundreds of seconds and provide two-point swings for teams. USC earned the higher spots in five of the final races, amounting to 10 additional points.

At the WPIAL championships, there will be many narrow margins of victories as the number of qualifiers for the PIAA competition has been reduced because of the pandemic. Only 16 swimmers, instead of 32, will qualify in all individual events. There will be eight automatic bids, including the champion, with the next fastest eight times across the state considered to round out the field of competition.

“If you don’t perform well at WPIALs, then there is no states,” Schraven said. “You need to be at your best. Everybody is in the same boat. Everybody is going to be primed for WPIALs.”

The USC boys were 7-1 overall heading into their final meets this weekend against Mt. Lebanon and Peters Township. The Panthers girls team was 6-2 overall.