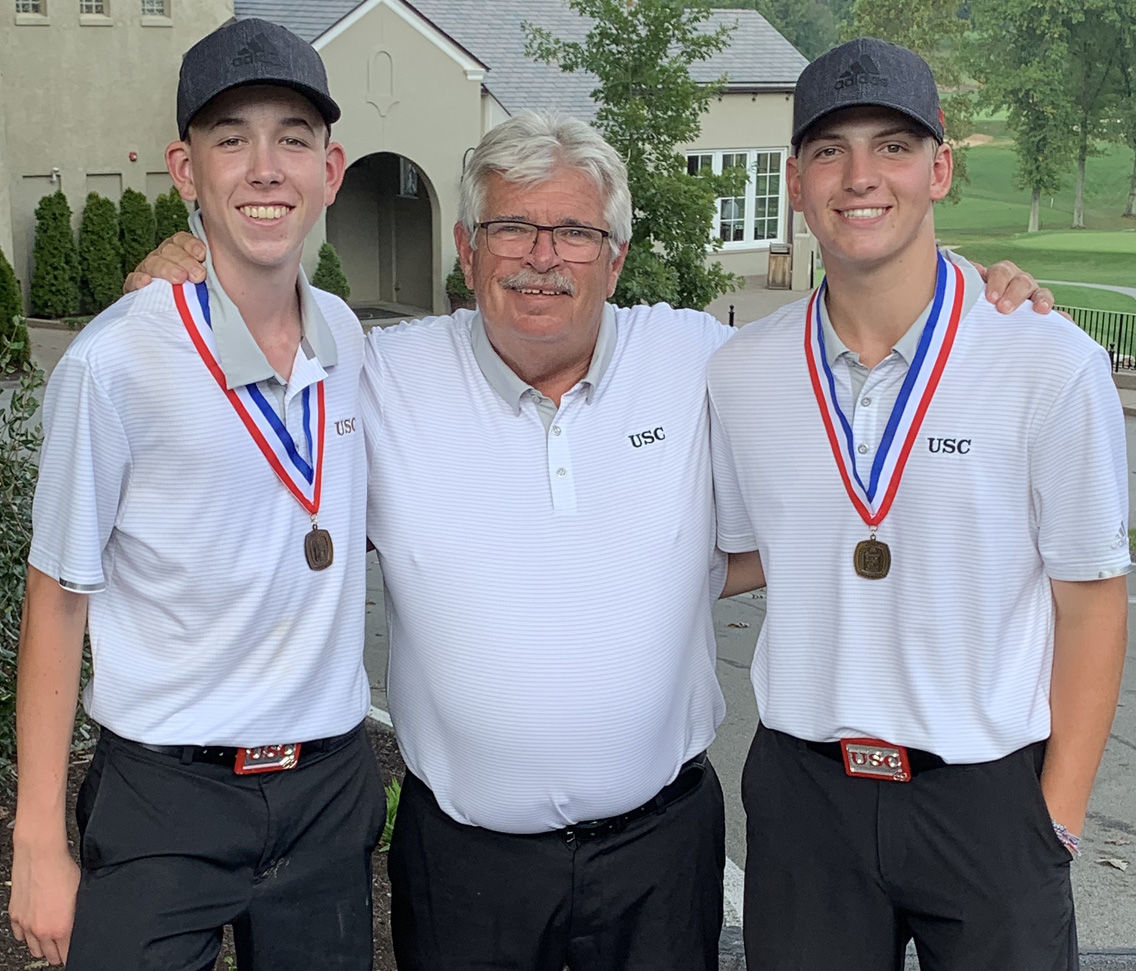 Scott Jordan and Nathan Piatt pose with their coach Todd Flynn after finishing third and 10th respectively during the WPIAL Class AAA boys’ golf championships. Both Upper St. Clair students qualified for the PIAA Western Regional to be held Oct. 15 at Tom’s Run. 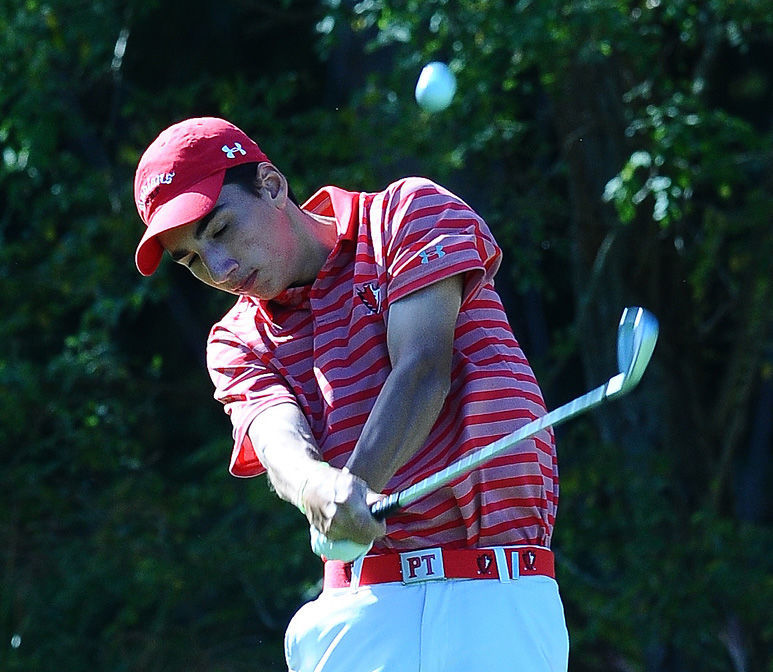 Scott Jordan and Nathan Piatt pose with their coach Todd Flynn after finishing third and 10th respectively during the WPIAL Class AAA boys’ golf championships. Both Upper St. Clair students qualified for the PIAA Western Regional to be held Oct. 15 at Tom’s Run.

A golf course may have many ups and downs but Scott Jordan’s game is on the level and that makes the Upper St. Clair junior one of the best in the WPIAL. In fact, he grabbed the bronze during the Class AAA boys championships held Oct. 1 at the Fox Chapel Golf Club.

“Scott is a very steady player,” said USC coach Todd Flynn. “He’s very good around the green and he’s a good putter. “Scott very rarely gets into trouble off the tee and this allows him to chip and putt better because he’s not busy trying to make a recovery shot.”

In carding a 3-over-par 73 from the back tees, which measured 6,237 yards, Jordan bogeyed only three holes. He was even on the remaining 15.

To top Jordan, Scott Bitar from Fox Chapel shot well below par, four strokes, to finish first with a 66. Penn-Trafford’s Alex Turowski secured the silver medal, one stroke ahead of Jordan with a 72.

All three golfers along with the other Top 14 finishers advanced to the PIAA Western Regional to begin their quest for a state championship. The Regional is set for Oct. 15 at Tom Run’s while the PIAA finals will be held Oct. 21-22 at Heritage Hills in York.

Jordan has as good a shot to capture a PIAA crown as his teammate, Nathan Piatt, does. Piatt finished 10th in the WPIAL with a 75.

“Jordan is very even-tempered and (Tom’s Run) plays into his hands because he plays smart golf. He doesn’t overthink the holes and he doesn’t let his brain get in the way.

“Nathan on the other hand is a very powerful golfer. He has as much a chance as anybody else does. He could win it all.”

During the WPIAL championships, Piatt had an uneven day. According to Flynn, at one point in the competition, he was 2-over and then after two or three more holes he was 1-under.

“Nathan had an up and down day,” Flynn said. “On the back nine, he left two or three putts on the edge but he slam dunked one for an eagle on another hole.”

That Jordan and Piatt emerged as USC’s representatives in the PIAA did not surprise Flynn.

A junior, Jordan has “made significant improvements” each year since arriving on varsity as a freshman. A senior, Piatt, likewise has demonstrated “steady growth” as a golfer.

However, Flynn said he is most proud of the progress Piatt has made as a young man and as a leader. Piatt is USC’s ace this year with three scores of 31s at Diamond Run and two on the Terrace Course at the St. Clair Country Club.

In addition, he recently committed to the University of Tampa to continue his golf career.

“Nathan has been in the top six since his freshman year, which is very difficult to do at St. Clair,” Flynn said of his team captain. “There is no question about his leadership. Having him on the team is like having an assistant coach.”

Though Jack Urban failed to make the cut for states, finishing with a 79, he along with Jordan and Piatt as well as Keith Kerber, Chand Vidalia, Alex Jones, Luke McDonnell and Ethan Rocks led the Panthers to a 195-203 victory against Peters Township to seal the Section 7-AAA title with a 10-0 slate.

With a 13-0 overall record, the Panthers are in contention for a WPIAL team championship. Team tournament action begins Oct. 8 with the Top 3 teams from each semifinal advancing to the finals set for Oct. 10 at Cedarbrook Country Club in Belle Vernon.

The Indians, meanwhile, advanced one player to the PIAA Western Regional. Ellian Ascencio finished 11th overall. The junior carded a 75.

“I was hitting the ball great,” Ascencio said. “My short game could have been a little better. I missed a lot of birdie putts. Overall, it was pretty solid.”

Ascencio’s teammates, however, did not have solid enough rounds to qualify for states. Christian Schreiber tied for 19th at 78, Andrew Poon placed 26th with an 82 and Mason Takacs carded an 86.

Luke Lestini was the area’s final representative for the Western Regional. The South Fayette senior overcame a rough start–double bogey on the first hole and four bogeys on the other first nine holes—and finished 12th overall with a 6-over-76.

“It’s not the first time I had a bad start,” he said. “I’ve been there before, even though that’s not where I wanted to be. When you are four or five over, you start to feel the heat. It stinks.

“I’m just happy that, even though I didn’t play very good, I grinded it out and got through.”