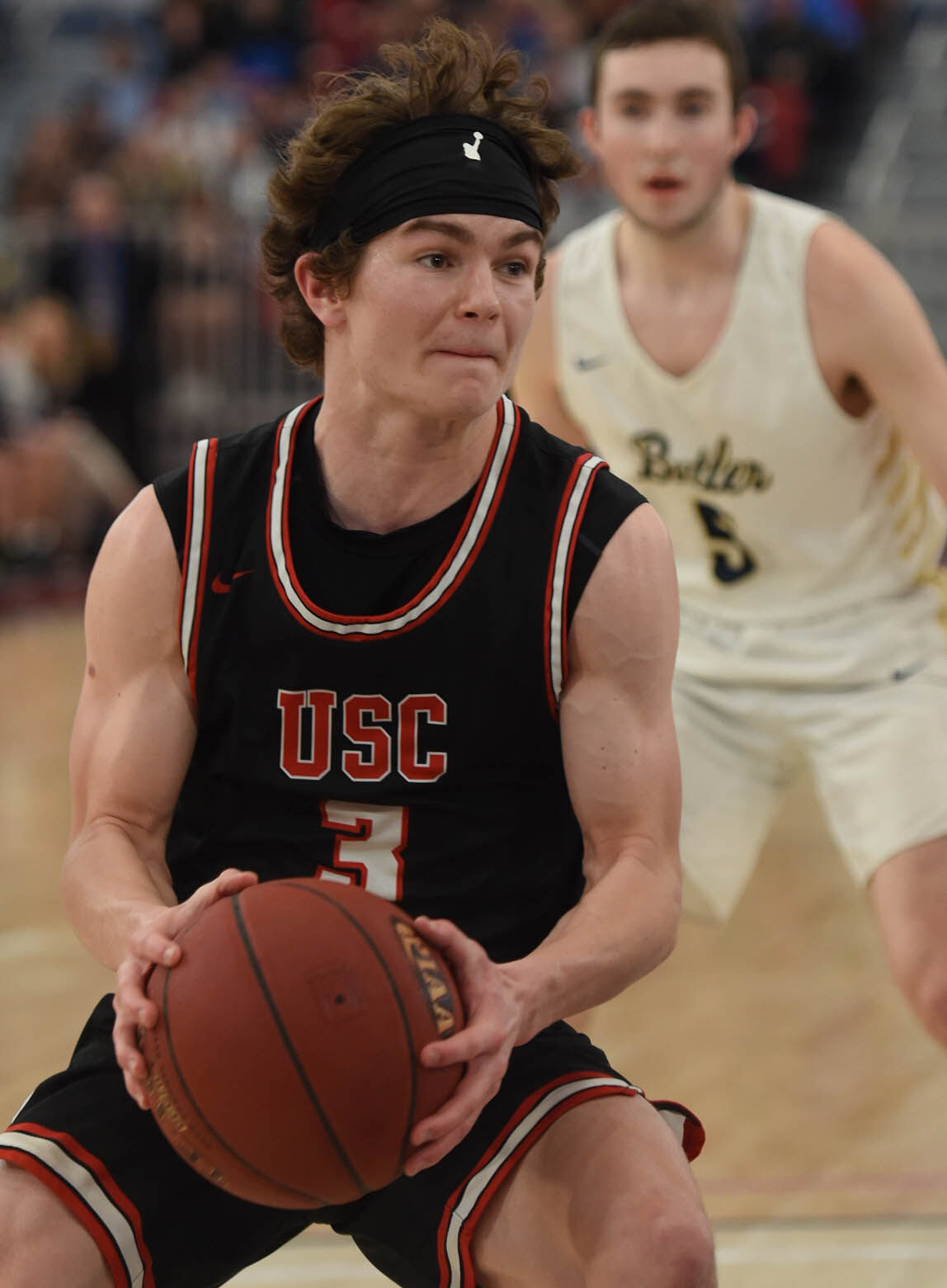 Ethan Dahlem looks to quarterback Upper St. Clair to victory on the basketball courts in much the same way he led the Panthers on the football field. 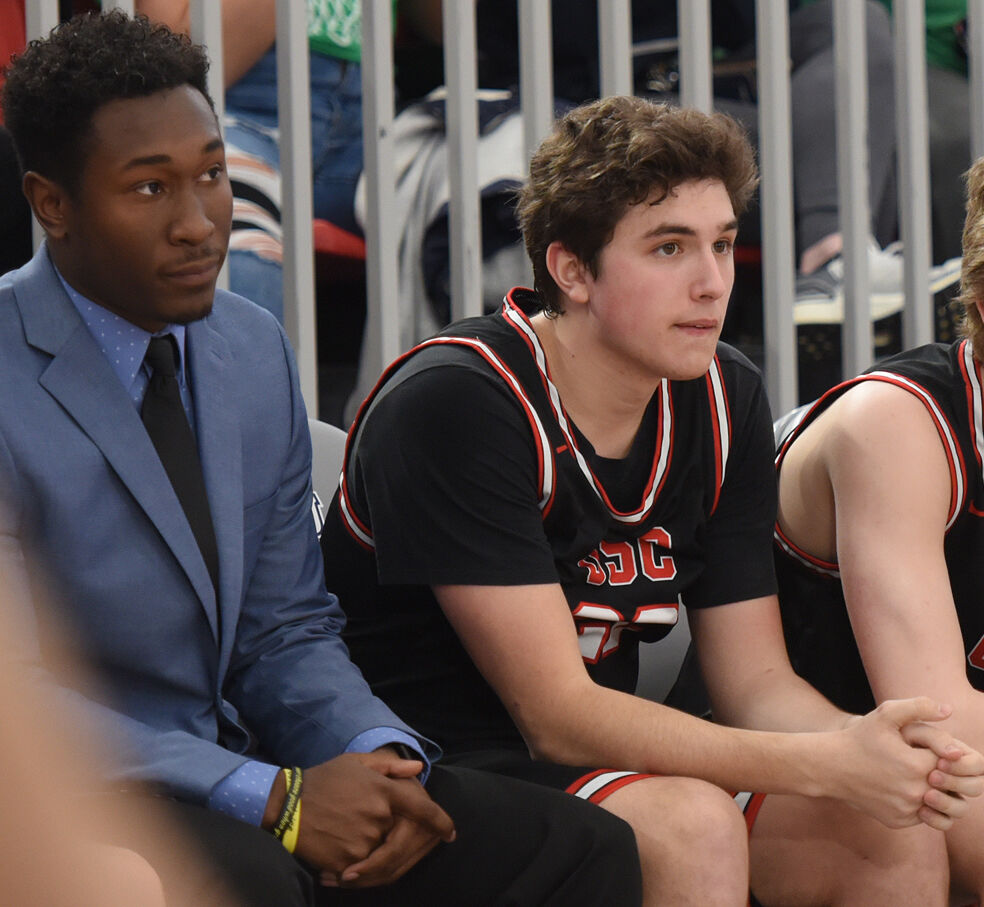 Upper St. Clair assistant coach Wayne Capers and Luke Gensler watch from the bench as the Panthers' season came to an end in March with a 77-73 loss to Butler in a PIAA second-round playoff game.

Ethan Dahlem looks to quarterback Upper St. Clair to victory on the basketball courts in much the same way he led the Panthers on the football field.

Upper St. Clair assistant coach Wayne Capers and Luke Gensler watch from the bench as the Panthers' season came to an end in March with a 77-73 loss to Butler in a PIAA second-round playoff game.

Danny Holzer envisions himself as an eternal optimist.

“I always see the glass as half full,” Holzer said. “We will get the season in, but it may be full of starts and stops. There are going to be bumps in the road.”

The Panthers put in eight practices before COVID-19 shutdown live learning throughout the school district, postponing all extracurricular activities until Dec. 7. With seven more days of required preparation, USC remains on schedule to host Chartiers Valley to open its season Dec. 14.

“We are ahead of everybody in our section,” Holzer added of the rule that teams must complete 15 practices before they can play a game. “Some teams haven’t even started.”

USC is expected to be one of the top teams in the WPIAL this winter. The Panthers return three starters and eight bench players from last year’s squad that posted a 21-5 record. USC reached the semifinals of the WPIAL Class 6A tournament and advanced to the second round of the PIAA playoffs.

In each instance, they lost to Butler.

Those losses to the Golden Tornado, which won the WPIAL title, stick in the Panthers’ craw. They held substantial leads in both games before failing to hold on for victories, falling 83-78 and 77-73, in overtime.

“These guys are motivated,” Holzer said of his players. “We lost two tough games to Butler that could have gone either way. We know how close we were. It’s in the back of our minds. My kids want to move on and take that next step and play for a title.”

Holzer has guided the Panthers to two WPIAL championships in 1996 and 2005 in his 26 years at USC. He will strive to do the same this winter with a plethora of talent.

Ethan Dahlem returns to the point guard position. He managed 8.2 points a game to go along with 6.7 assists in 2019. In addition to his passing skills and crafty play on defense, Dahlem has improved his perimeter shooting making him a “complete” guard, Holzer said.

“Ethan’s a tough kid. He plays so hard and he has great leadership skills that the kids will follow him,” Holzer said.

Luke Gensler returns as USC’s top offensive threat. The four-year varsity player led the Panthers in scoring in 2019 with a 14.9 average. He also dished up 4.1 assists a game.

“Luke is interchangeable for us at shooting or point guard. He’s gotten bigger and stronger this year. We know he will provide scoring for us, but we are excited about his ability to lead our guys,” said Holzer of Gensler, who was voted as a captain as a junior.

David Pantelis returns as a wing guard. He averaged 10.7 points per game year ago.

Luke Banbury will once again be relied upon to rebound. Technically the team’s fourth returning starter, he was ineligible to participate in the playoffs last season because of the transfer rule. A USC resident, he played at Seton LaSalle previously.

“He was our leading rebounder,” Holzer said. “Luke’s very strong and physical. He gives us a great presence inside and outside.”

While Holzer will rely on those four players, especially for leadership, he said all 15 of the players on his roster are expected to contribute to USC’s success.

Among the players he expects to rotate into the line-up will be senior Jon Sukernek and juniors Tanner O’Grady and Mike Pellicci. All are guards. Junior Porter Rauch and sophomore Aiden Besselman are forwards along with Devin Hall, who is a 6-2 freshman.

“We will need everybody because we like to run and press. That’s a big part of our style of play,” Holzer said. “We feel if we continue to improve every day, and in every game, that we can compete.”

And that includes competing against the pandemic. The Panthers are doing all they can to combat COVID-19.

When they practice live, they follow all protocols. They are not using their newly redesigned locker room. They enforce distancing by pulling the bleachers out to insure players stay six feet apart. There are temperature checks and masks are worn during all workouts.

“We’re doing all the right things and taking the proper measures but my players are veterans they know what to do on their own,” Holzer said. “When they are at home, they are doing a lot of stuff to stay in shape. They know that hard work has to be part of whatever goals we want to achieve.

“I’m confident we’ll beat this thing, but we have to be ready to continue to adjust,” he added. “I get it. This hasn’t been fair to a lot of teams but you learn that life is not fair. You just do what you can. That’s our attitude. We’re staying optimistic.”