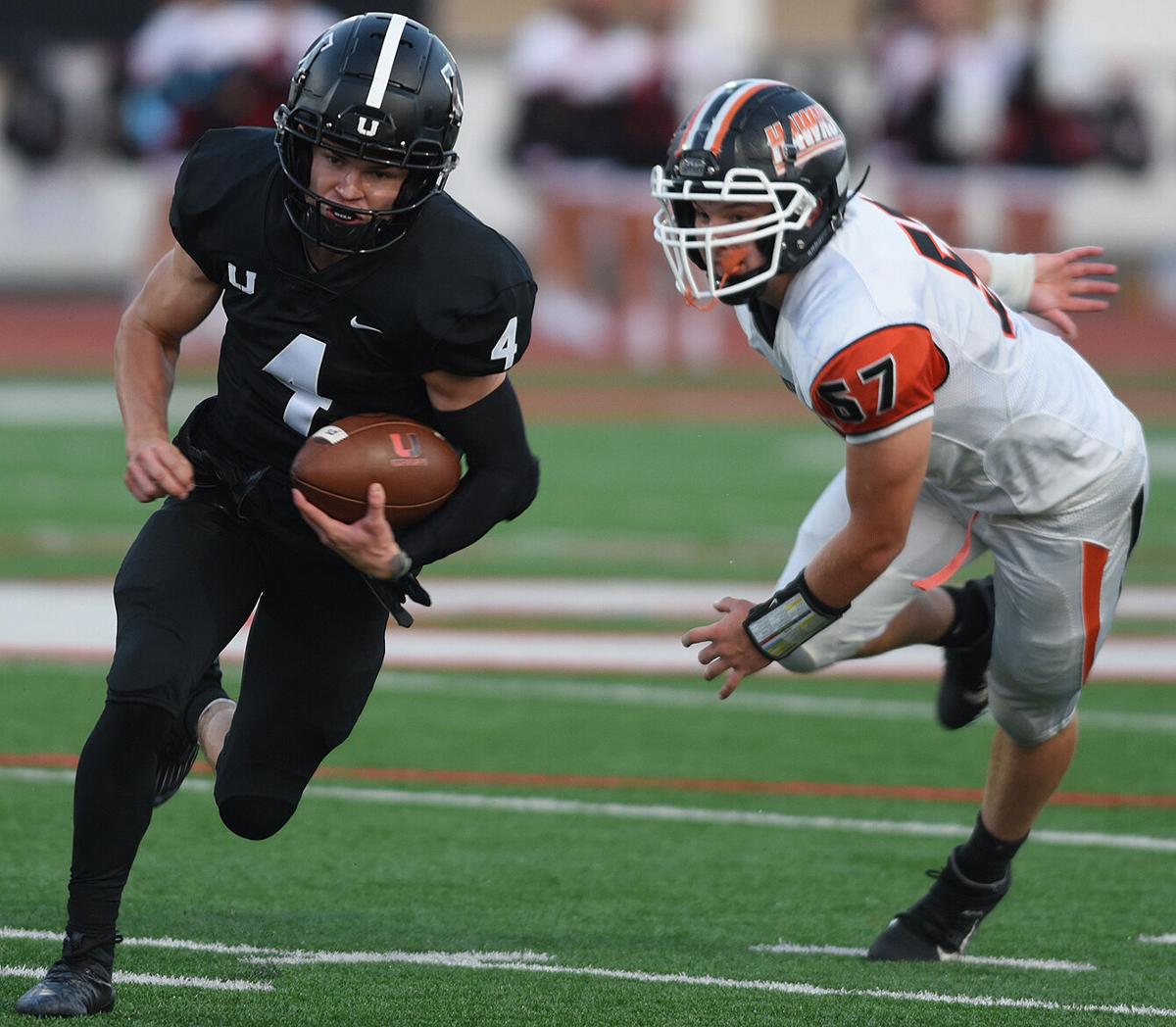 Ethan Dahlem eludes a tackler on his way into the end zone. The senior signal caller rushed for two touchdowns and threw for 154 yards to lead Upper St. Clair to a 34-7 victory over Bethel Park. 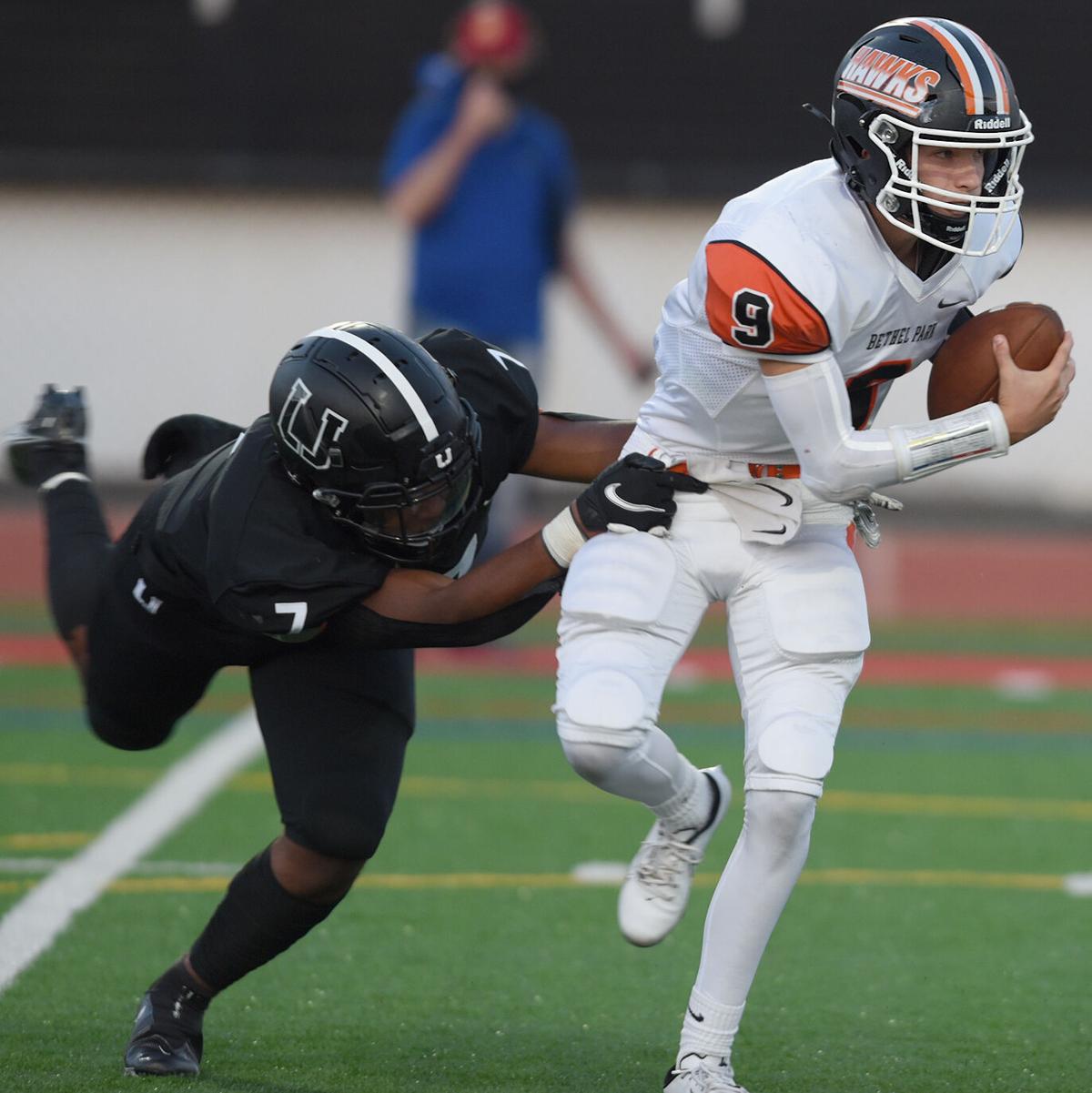 Ethan Dahlem eludes a tackler on his way into the end zone. The senior signal caller rushed for two touchdowns and threw for 154 yards to lead Upper St. Clair to a 34-7 victory over Bethel Park.

Upper St. Clair used an array of tools and hammered out a 34-7 win over Bethel Park in the Allegheny Six Conference opener.

While key cogs like Ethan Dahlem, who had 154 yards passing and two scoring runs, and Yale recruit David Pantelis, who had seven catches for 50 yards, did their share of work, a plethora of other Panthers carried the load.

Jaden Keating and Ethan Hiester combined for 150 yards on 21 carries. Each scored one touchdown.

Mateo Cepullio hauled in four passes for 53 yards. He also intercepted a pass on defense.

Luke Banbury forced a fumble that set up USC’s initial score, a four-yard run by Keating.

“If you try to take away No. 11 (Pantelis) and No. 4 (Dahlem) away, then somebody else hurts you,” said BP coach Brian DeLallo. “That’s why (USC) is so much better this year.

“We did some good things, but they are really good,” said DeLallo of the Panthers. “They are well-coached and they have some really good players. They are a very good team. They dominated us up front and ran particularly well.”

USC rushed for 226 yards on 37 carries and scored all five touchdowns on the ground.

Dahlem scored twice in the third quarter on rushes of 15 and 10 yards. Hiester led all rushers with 93 yards. He had a 15-yard touchdown run.

Keating finished with 57 yards on 12 carries and two first half touchdowns.

Additionally, Abelardo Sobrarzo kicked a 21-yard field goal to ignite the Panthers in the first quarter and spearhead them to a 15-0 halftime advantage.

“This was a game of the unsung heroes,” said USC coach Mike Junko. “That was our hope. Some of our other kids contributed and we showed that we were a little more balanced.

“We talked a lot about making sure Ethan (Dahlem) is using all of his weapons and this game was a step forward in that process. No doubt this bodes well for the future.”

Despite the defeat, BP anticipates a brighter season ahead. The Hawks, who only have one starter back from last year’s 7-4 WPIAL quarterfinal playoff squad, will recover, DeLallo said.

“Our effort was great. I have no problem with that. When you get your butt whipped by a better football team,” he said, “you can either sulk and get down in the dumps or you can find a way to come back and get better and improve.”

Anthony Mackey rushed for 146 yards on five carries. He scored touchdowns of two and 89 yards. Mackey also threw for 128 yards. He completed 8 of 14 passes.

South Fayette traveled to Ohio for its opener and defeated Dover 42-14.

Naman Alemada tossed four touchdown passes to Ryan McGuire, who accounted for two of those scoring strikes, along with Joey Audia and Tristan Bedillion. Shay Aiken, Jacob Hosteler and Nate Deanes rushed for the other scores.