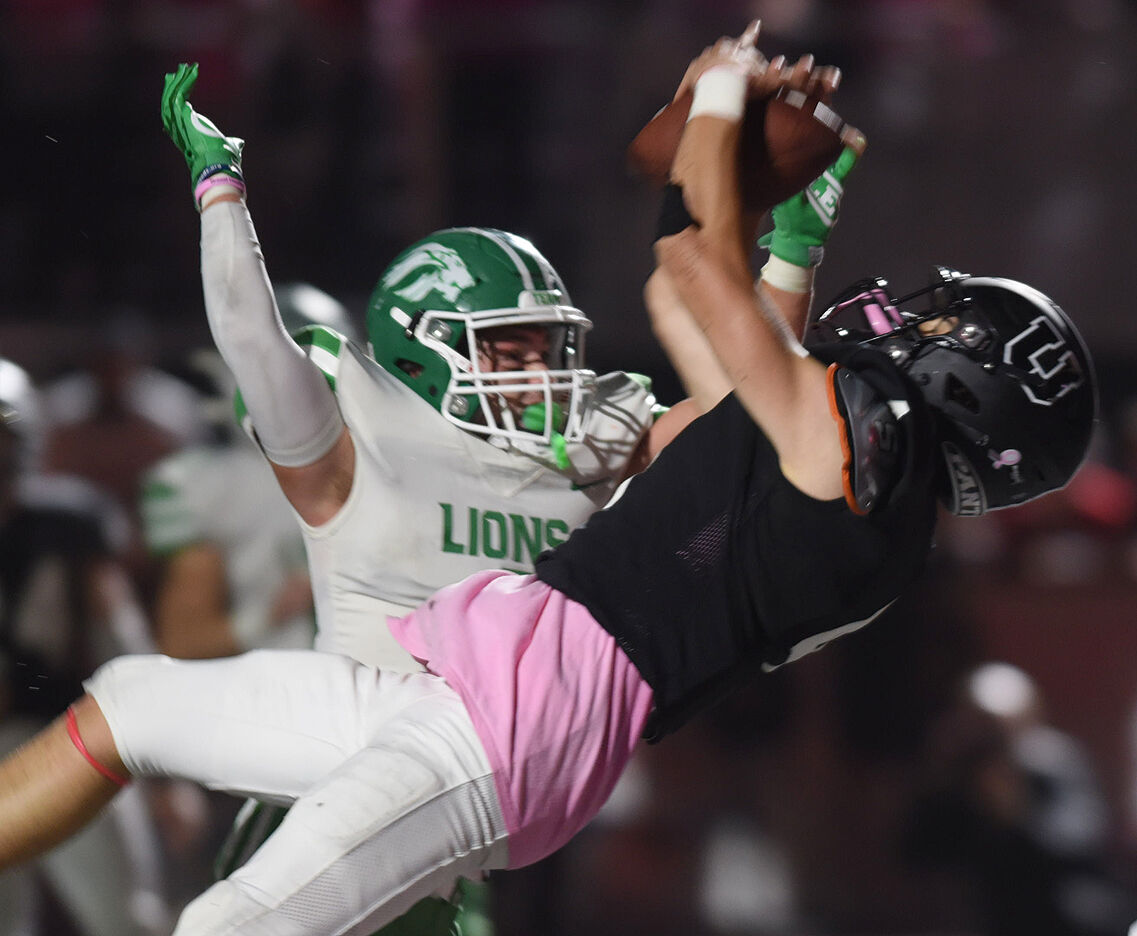 Upper St. Clair receiver Aidan Besselman hauls in the tying touchdown pass that pushed the game into overtime against South Fayette. The Panthers scored a 31-28 win over the Lions on a field goal by Bennett Henderson. 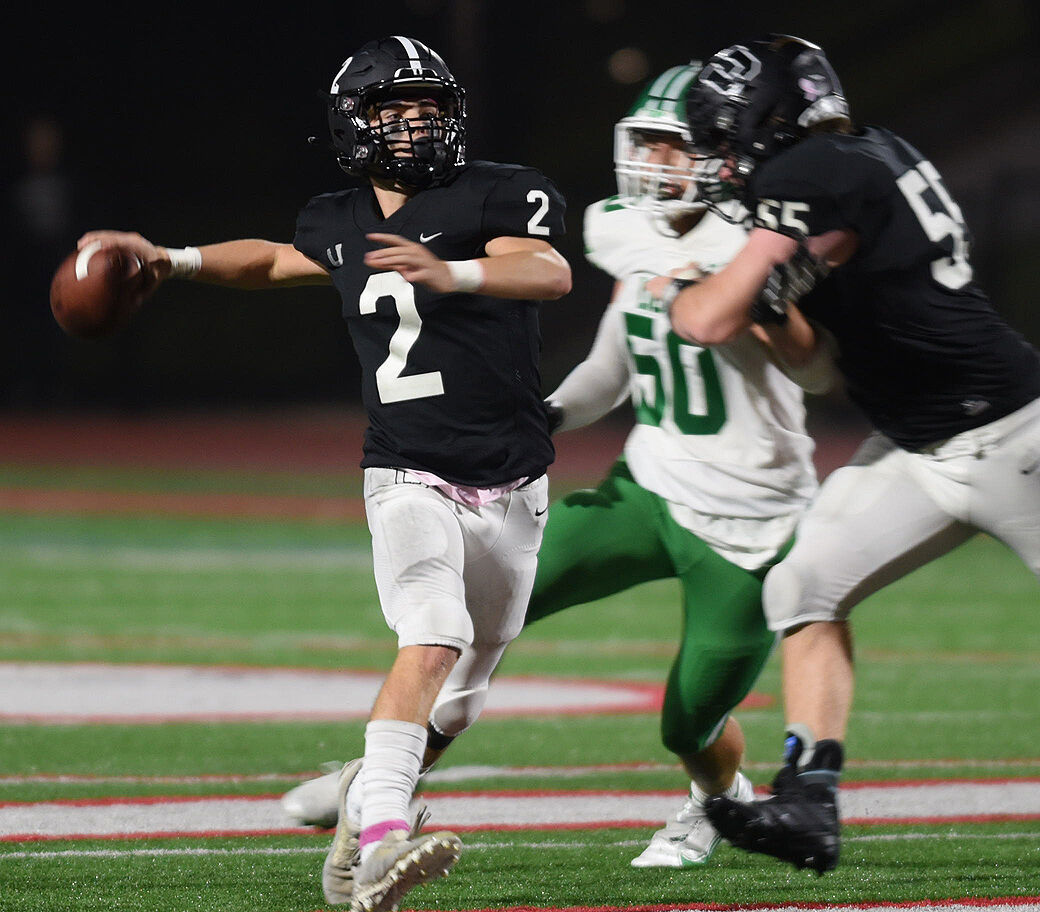 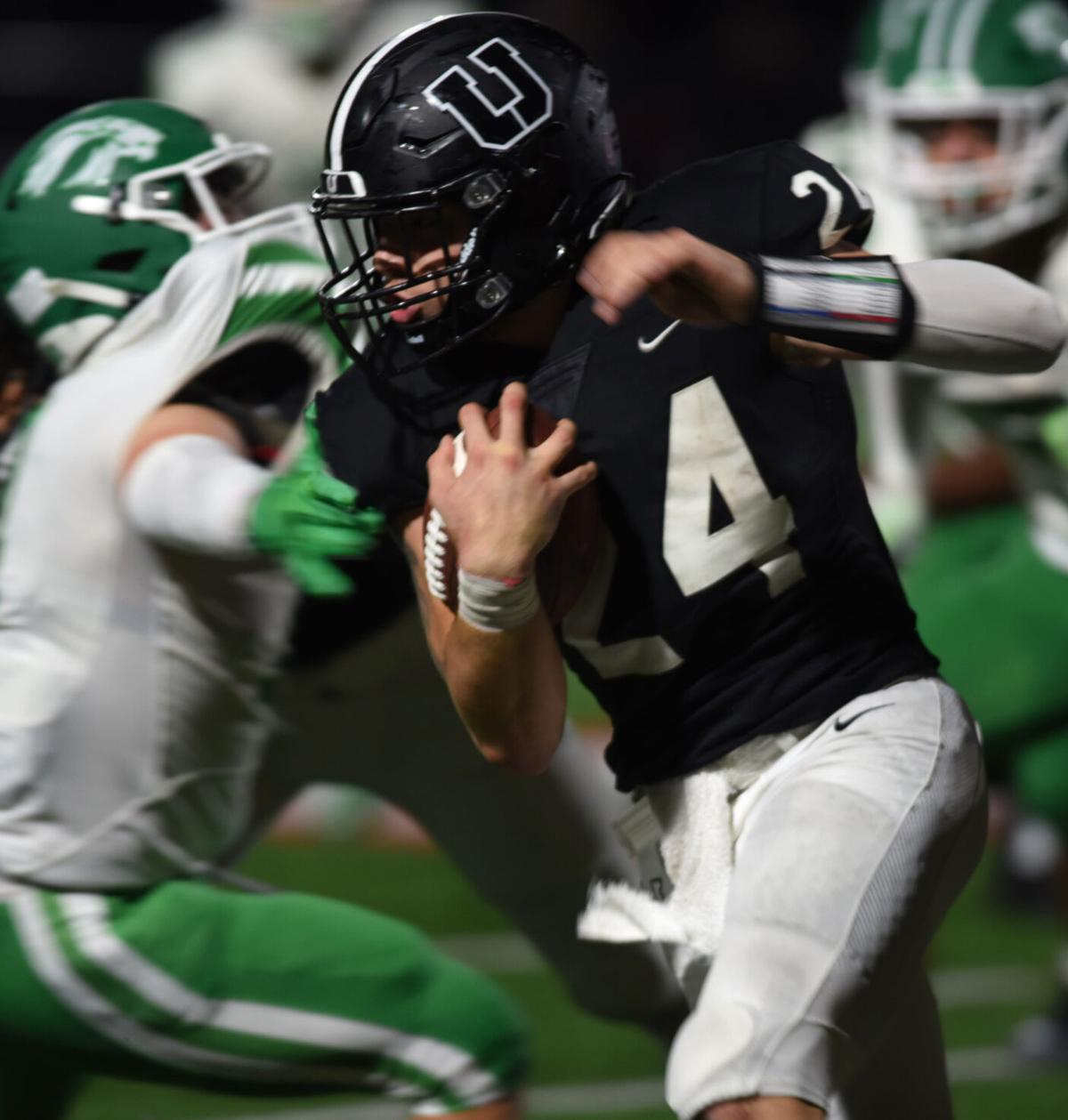 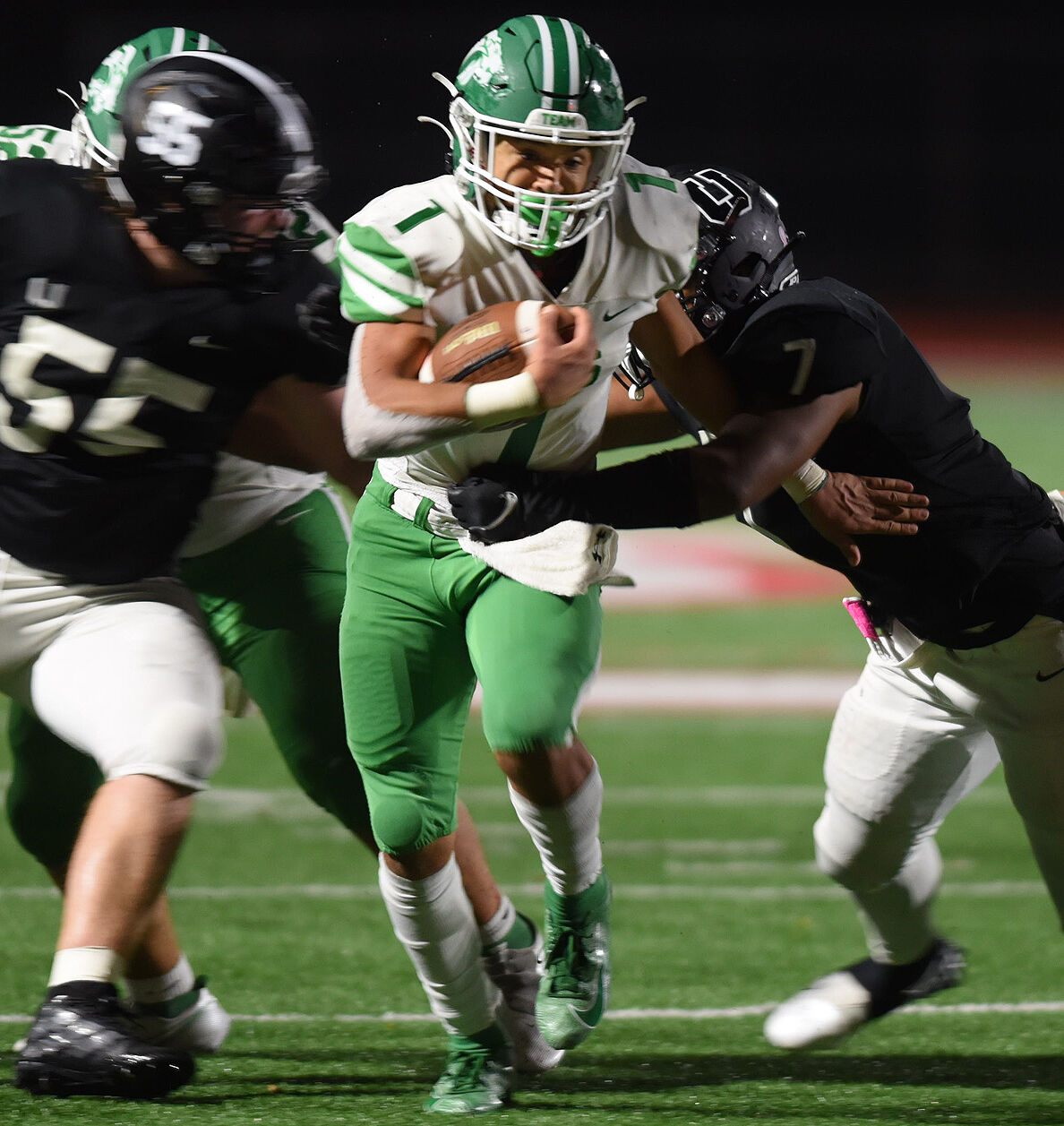 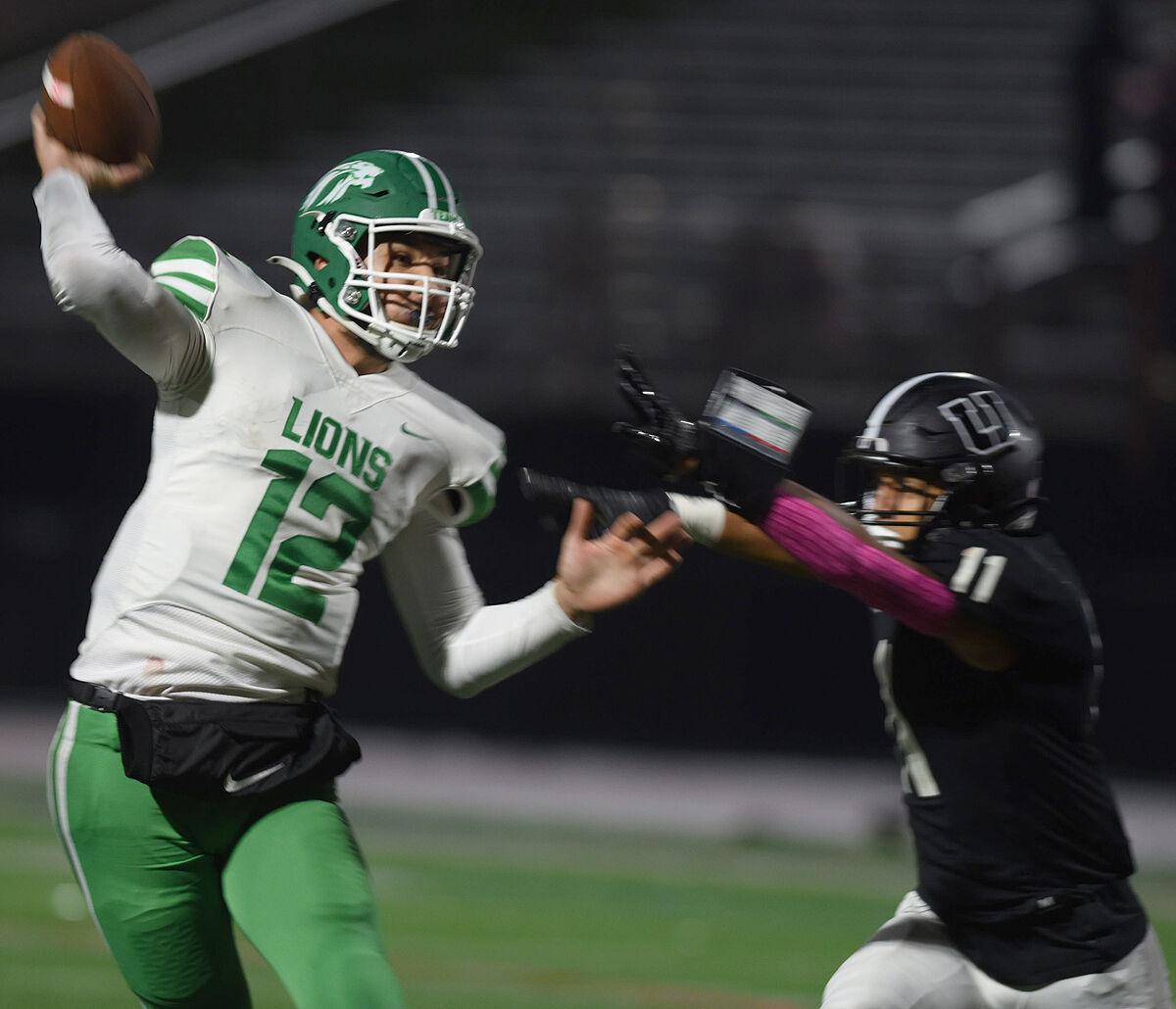 South Fayette quarterback Landon Lutz gets off the pass before being tackled by Upper St. Clair's Ivory Travers.

Upper St. Clair receiver Aidan Besselman hauls in the tying touchdown pass that pushed the game into overtime against South Fayette. The Panthers scored a 31-28 win over the Lions on a field goal by Bennett Henderson.

South Fayette quarterback Landon Lutz gets off the pass before being tackled by Upper St. Clair's Ivory Travers.

As Upper St. Clair approaches the WPIAL Class 5A football playoffs, the Panthers will lean upon their Oct. 22 overtime win against South Fayette for inspiration.

The Panthers trailed by 15 points at the start of the fourth quarter earning a 31-28 victory. Mateo Cepullio tossed two scoring strikes to Aidan Besselman, including one as time expired in regulation, to tie the contest.

Cepullio completed 12 of 14 passes for 155 yards. He also had four receptions for 47 yards and another touchdown.

Before assuming some of the QB duties, Cepullio had been one of the top receivers in the WPIAL along with Besselman, who finished with five catches for 81 yards against SF.

“Aidan and Mateo are two kids who have made plays for us all year long,” said USC coach Mike Junko. “In big-time moments they seem to find ways to make plays.”

Ethan Hiester contributed his share to the triumph. He rushed for 135 yards and had four receptions. He tossed the scoring strike to Cepullio, rushed for a touchdown and made the 2-point conversion against the Lions while also handling the punting duties and playing linebacker on defense.

“Ethan runs so hard. He’s really on a mission,” Junko said. “He carries guys at the line of scrimmage and gets those extra tough yards. We’re really proud of the way he’s played.”

While seniors like Cepullio and Besselman delivering the leadership, younger members of the team like junior Jacob Hufanagel have been able to develop and improve throughout the 2021 campaign. Hufnagel had two key interceptions in the second half against the Lions.

Juniors Ivory Travers, Tim Speer and Mark Banbury have also contributed for the defense, while sophomore Bennett Henderson has dominated the special teams. A sophomore placekicker, he nailed the game-winning field goal of 29 yards against the Lions.

“We have said all year that we are a young team that was going to do a lot of growing up this year. With every game we have seen improvement and a growing confidence in our players,” Junko said.

“Obviously a win like South Fayette in that fashion late in the game sticks out. As has been the case all year, this group refuses to quit no matter the situation. They have a never-die attitude. Games like SF are steps in our development and we are excited to see what it brings for us in the future.”

The road to Heinz Field and a WPIAL Class 5A championship goes through Moon. The Tigers dominated the Allegheny Six Conference. The top seed in the Class 5A tournament, the Tigers are ranked No. 3 in the state.

After the Tigers, Class 5A is a balanced league, comprised of all public schools with similar size.

“Obviously Moon deserves to be at the front of the pack,” Junko said, “but one of the great things about 5A is the parity. I think that there will be a number of surprise teams that make a run this year.”

Junko believes USC’s schedule has prepared the Panthers to leave their mark during the postseason. In addition to its conference schedule, USC played Mt. Lebanon, Penn Hills and Pine-Richland.

“Our conference is full of well coached and talented teams,” Junko said. “I think those tough games have shaped and molded our kids into a unit that is now battle tested and ready for the playoffs.”

Junko said two of the team’s goals all year were to improve defense and strengthen the run game on offense. He said in order have success in the playoffs, a team needs to be able to do both consistently.

“We have seen much improvement in both areas this year and I think that is something that will really help us in the playoffs,” he said.

“Additionally,” he continued, “our goal was to build a physical football team that could handle the highs and lows that a season can bring. If we can stay healthy and play our best football I think our team will be able to compete with anyone in these playoffs.”

The Lions needed a win on Oct. 29 against Peters Township coupled with a Moon win over West Allegheny for a shot to possibly extend its season.

Those games did not end in time to be included in this edition.

In the loss to USC, Landon Lutz completed 15 of 24 passes for 175 yards and two touchdowns of 28 and 30 yards to Ryan Kovatch and Logan Yater, respectively.

Nate Deanes rushed for the other two scores of 2- and 13-yards. He also had six catches. Yater finished with four receptions for 66 yards.

Chartiers Valley needed a win against Montour on Oct. 29 to clinch the forth and final Parkway Conference playoff spot. Both were 1-3 heading into the fray.

This game did not end in time to be included in this edition.

Aliquippa, Beaver and New Castle clinched the top three spots in the division for the WPIAL Class 4A playoffs. The Colts lost three games in a row to the Quips, Bobcats and Hurricanes before facing Montour.

The Class 4A championship along with the 3A and 5A finals will be played Nov. 27 at Heinz Field. The Class 1A and 2A title tilts are scheduled for Nov. 26.