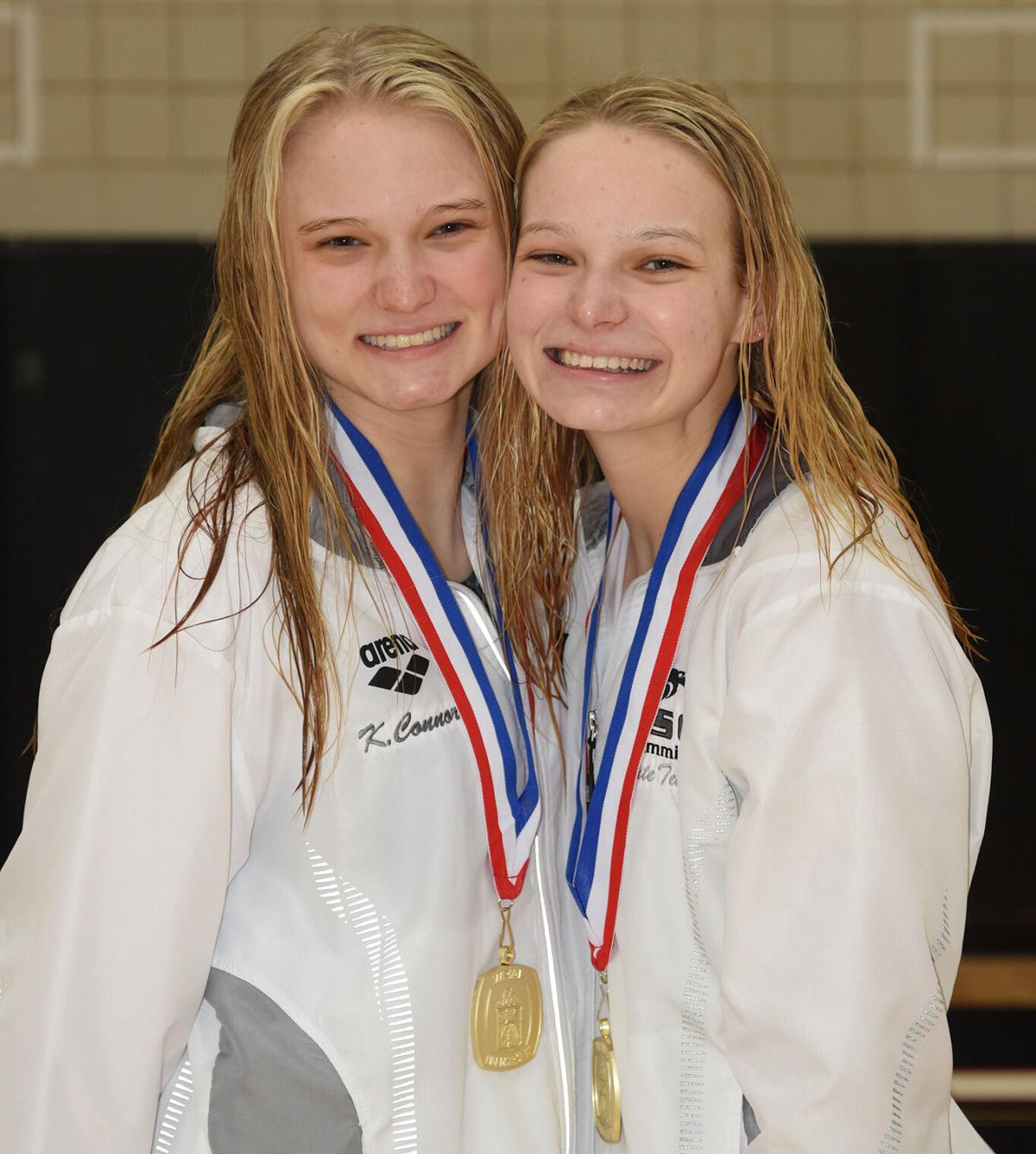 Kaitlyn and Taylor Connors pose with the gold medals they won during the WPIAL Class AAA championships. 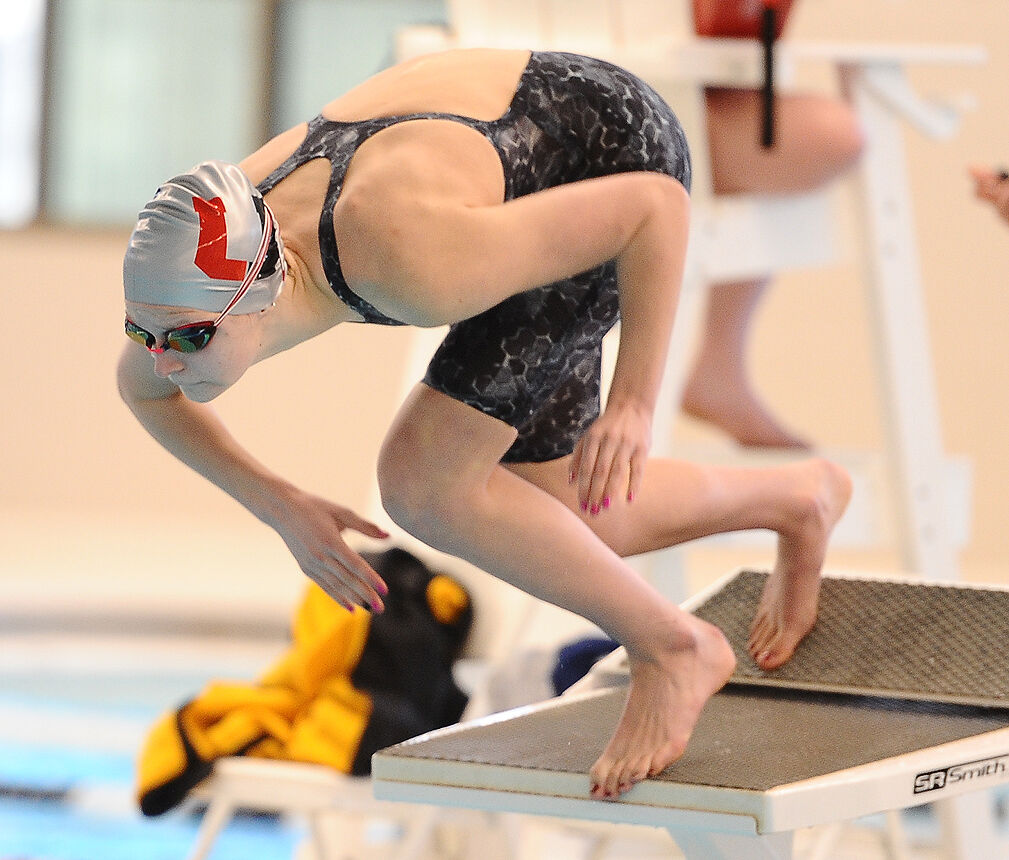 Taylor Connors explodes off the blocks at the start of the 200-yard freestyle event during the WPIAL Class AAA girls championship meet. 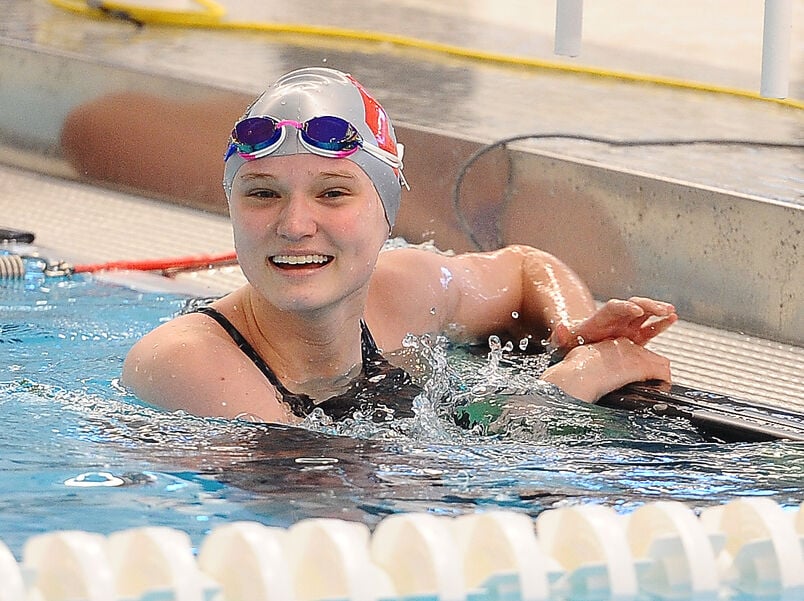 Kaitlyn Connors of Upper St. Clair is all smiles after sprinting to victory in the 50-yard freestyle race during the WPIAL Class AAA girls swimming championships. 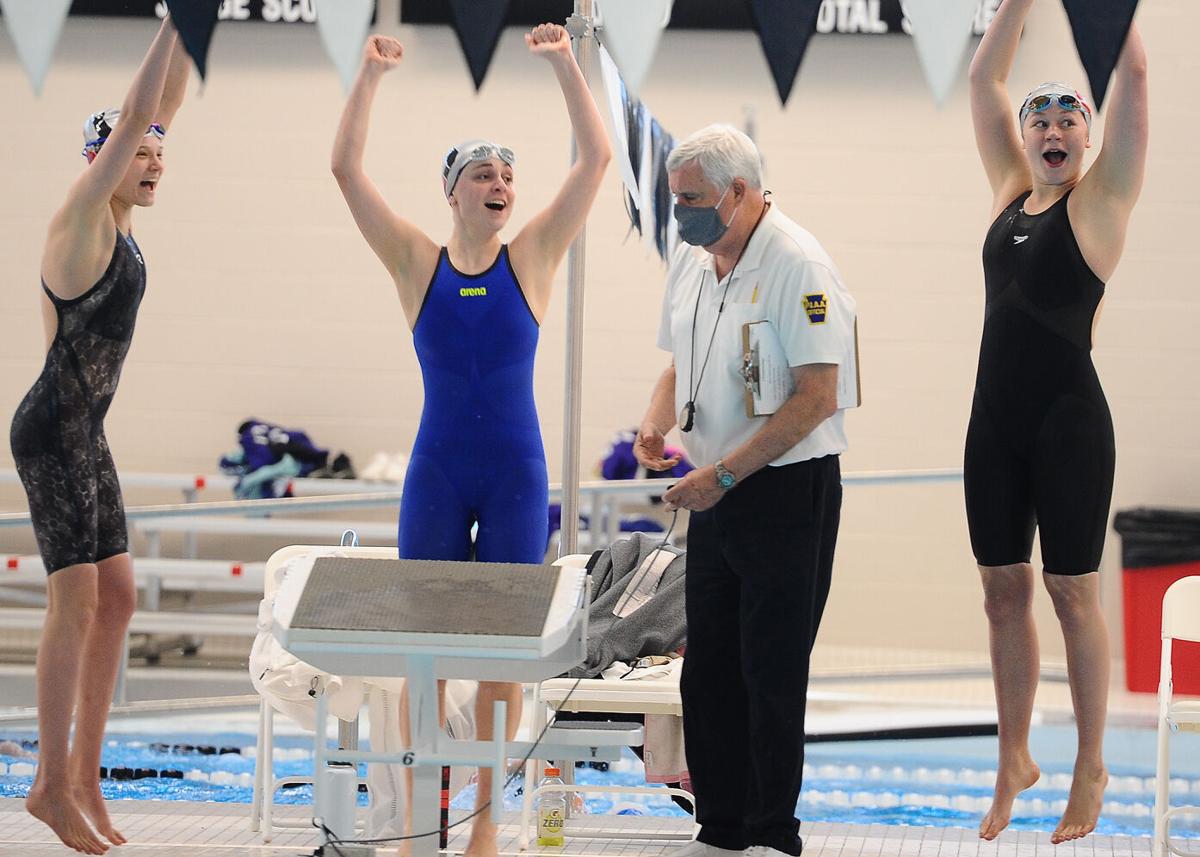 Kailtyn Connors, Amanda Aidar and Abby Rutkowski celebrate as Taylor Connors touched the wall first to give Upper St. Clair a victory in the 200-yard freestyle relay with a 1:36.06 time. 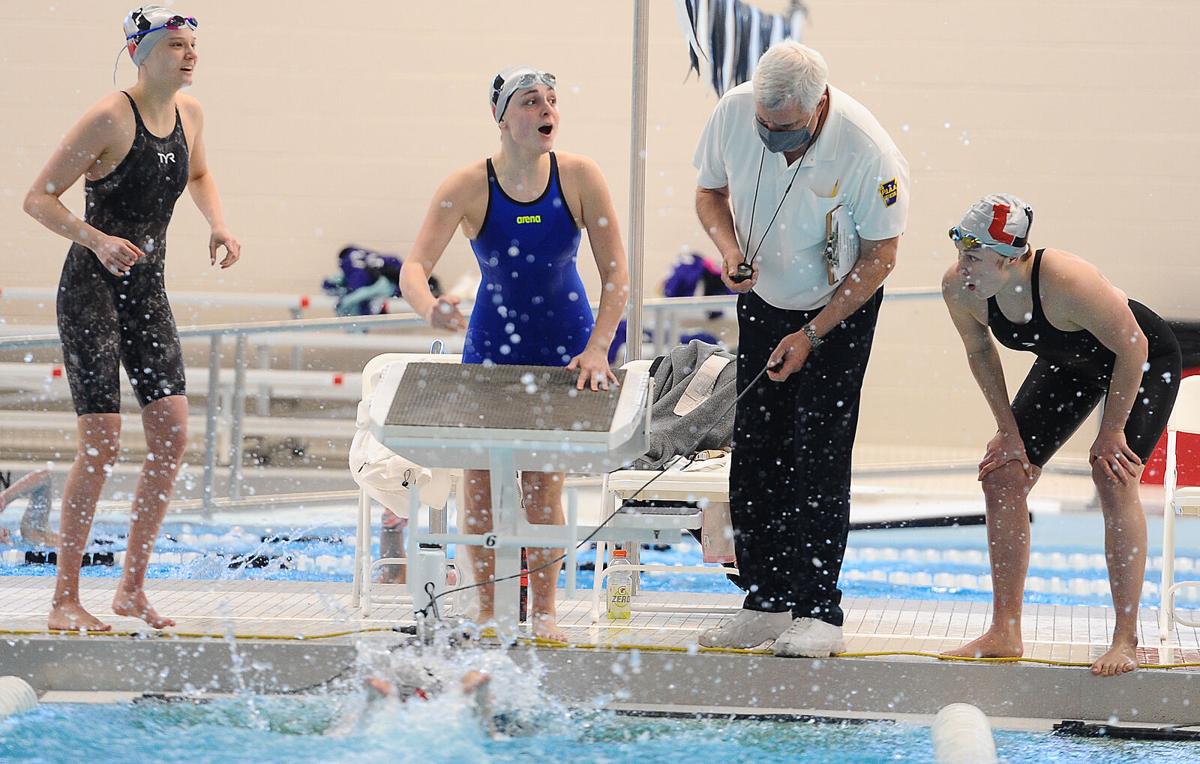 Kaitlyn and Taylor Connors pose with the gold medals they won during the WPIAL Class AAA championships.

Taylor Connors explodes off the blocks at the start of the 200-yard freestyle event during the WPIAL Class AAA girls championship meet.

Kaitlyn Connors of Upper St. Clair is all smiles after sprinting to victory in the 50-yard freestyle race during the WPIAL Class AAA girls swimming championships.

Kailtyn Connors, Amanda Aidar and Abby Rutkowski celebrate as Taylor Connors touched the wall first to give Upper St. Clair a victory in the 200-yard freestyle relay with a 1:36.06 time.

Upper St. Clair coach Dave Schraven intentionally pits Taylor and Kaitlyn Connors against each other during practice sets to bring out the best in the siblings.

The strategy worked March 7 as the sisters dominated the competition during the WPIAL Class AAA championships held at USC’s own state-of-the-art facility.

“Taylor and Kaitlyn are not overtly competitive, but when they are swimming next to each other they both want to get their hand on the wall first,” Schraven said. “There is no doubt that has made a difference for them.”

Five gold medals were draped around the necks of the sisters after the competition. Taylor earned three, while Kaitlyn won two.

Individually, Taylor defended her 200-yard freestyle title. She also earned the gold in the 100 free, finishing two slots ahead of Kaitlyn

“My younger sister pushes me a lot. Every day in practice, she is always right there,” Taylor said. “Obviously, I can’t let my younger sister beat me. So I have to pick it up a bit.”

“It’s hard swimming fast people but it was really exciting,” Taylor said. “It definitely means a lot, especially in our home pool.”

The WPIAL championships were held at USC this year because the University of Pittsburgh’s Trees Pool could not accommodate the meet because of COVID-19 restrictions.

Swimming with, and against, her older sister matters to Kaitlyn as she is a calming influence. Kaitlyn won the 50-yard sprint in 23.75 for her own individual gold medal.

“It’s amazing having someone living in the same household as you and swimming against you in the pool,” Kaitlyn said. “It’s a great thing to talk to them. Of course, I look up to Taylor. Plus, she is extremely fast.”

Before they became winners at USC, the siblings had another role model. Their older sister, Lauren, swam for USC before matriculating to St. Vincent College. A sophomore, Lauren has set school records in the 100 and 200 backstroke events for the Bearcats. She is also a member of the school’s record-setting medley relay unit.

“Lauren really influenced us,” Taylor said. “She got us into swimming.”

Speed, strength and determination got Taylor the win in the 100 free.

“The 100 is fun and I like it the best. I like how you need endurance and speed. You need to go out fast and be able to hold it. So you have to have the endurance to do that,” Taylor said.

Winning the 100, Taylor added, meant more to her than defending her 200 title. A win in the shorter distance had eluded her in the past. Taylor was a bronze medalist as a junior and out of medal contention as a sophomore.

“Anytime you do bad you hope you can do better the next year. So, I’m glad I did that in the 100,” Taylor said. “It does mean more because it was my first time winning it and I also swam my sister and my teammates. It was very exciting that we all reached the podium.”

In addition to Taylor’s win and Kaitlyn’s bronze, Abby Rutkowski placed sixth with a time of 53.22 to secure another WPIAL medal for the Panthers in the 100 free.

Meanwhile, Kaitlyn stood alone, atop the podium in the 50 free with a 23.75 time.

“Kaitlyn just hops up and races,” said Shraven. “I think that attitude serves her well. She doesn’t overthink things.”

As a freshman in her first WPIAL meet, however, Kaitlyn did get jittery.

“I was extremely nervous,” she said, “but it’s so much fun to race and give it your all.”

As a senior, Taylor has learned to check her emotions.

“Taylor has always been serious,” Schraven said. “In the past she has come in nervous about her place. One of my messages to her was to look at the WPIAL standings. ‘You are the first or second in almost every event. You are the elite swimmer of the WPIAL right now and you need to act that way and think that way before your races.’ I think that showed.”

Taylor, who will attend Miami University of Ohio, anchored the 200-free relay to victory in 1:36.06. Taylor swam a 22.77 in her 50-yard leg to secure the win for the unit, which included Kaitlyn, Rutkowski and Amanda Aidar.

“That was a big-time, college-level performance,” said Schraven. “When the pressure is one, that is when the champions step up and get it done.”

The Connors sisters, along with Rutkowski and Aidar, secured silver medals in the 400-free relay. The final event of the meet clinched third-place in the team standings for the Panthers. North Allegheny captured its 13th consecutive title with a 425 score. Seneca Valley was the runner-up with a 249 total, 26 points ahead of the Panthers.

“We are happy with what we have done here but our work is not done yet,” said Schraven. “We are training to keep getting better and we have every intention of swimming faster at states.”

The PIAA championships will be held March 19-20 at Cumberland Valley High School in Mechanicsburg. WPIAL champions automatically qualify for the meet.

The top best times in the state will determine the remaining at-large bids. This year’s state meet has been reduced from 32 to 16 qualifiers.

Among the other individual place-winners for the Lady Panthers were: