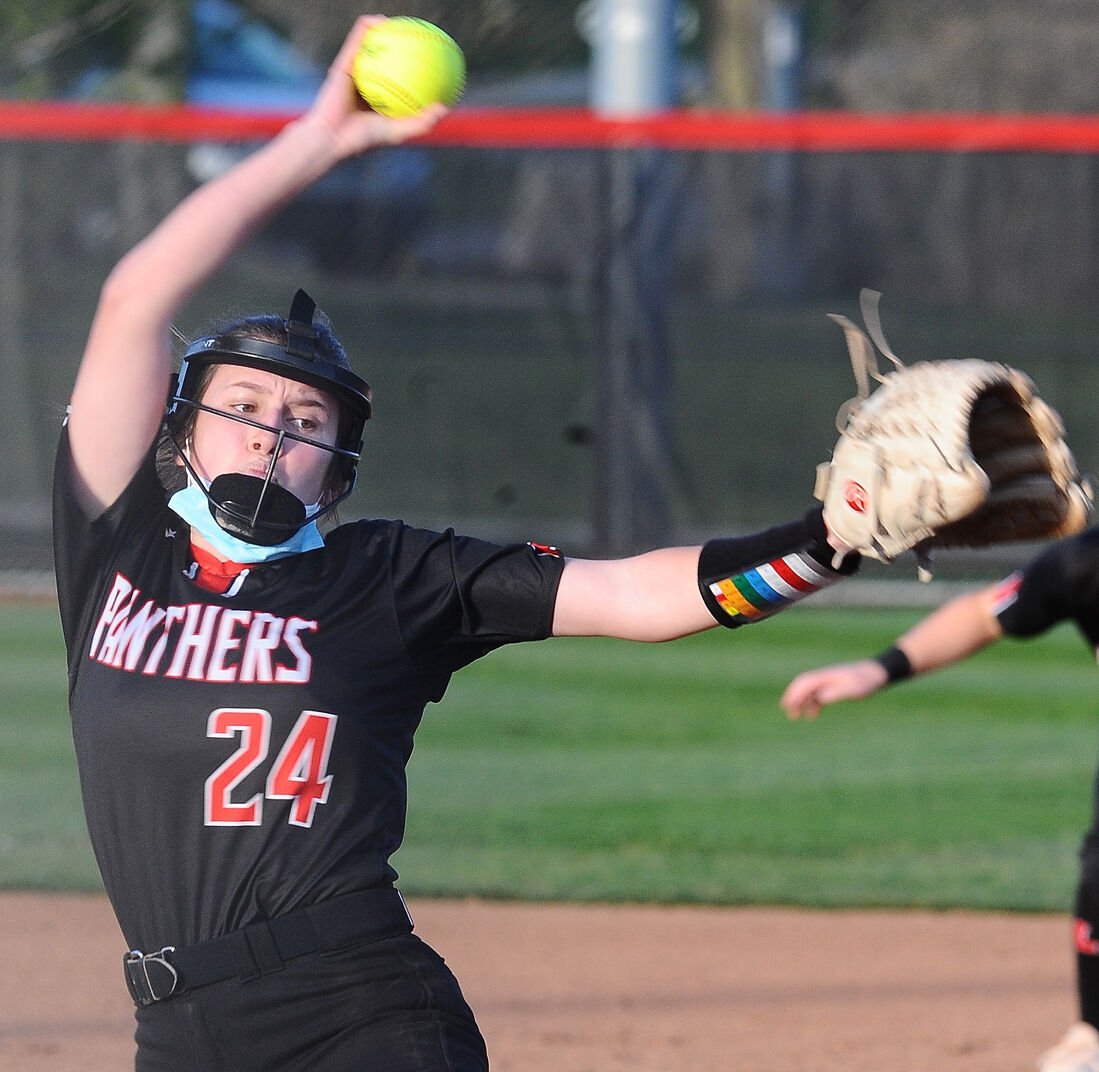 Emma Redlinger delivers a pitch to the plate against South Fayette. 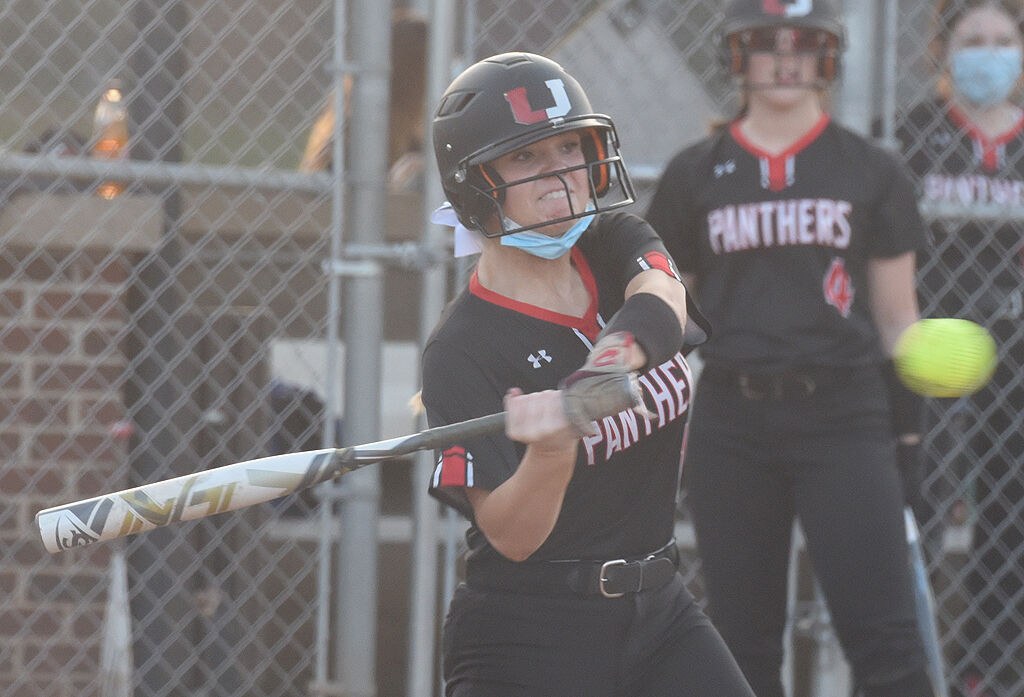 Upper St. Clair’s Kerri Albertini keeps her eye on the ball as she is about to make contact against South Fayette. 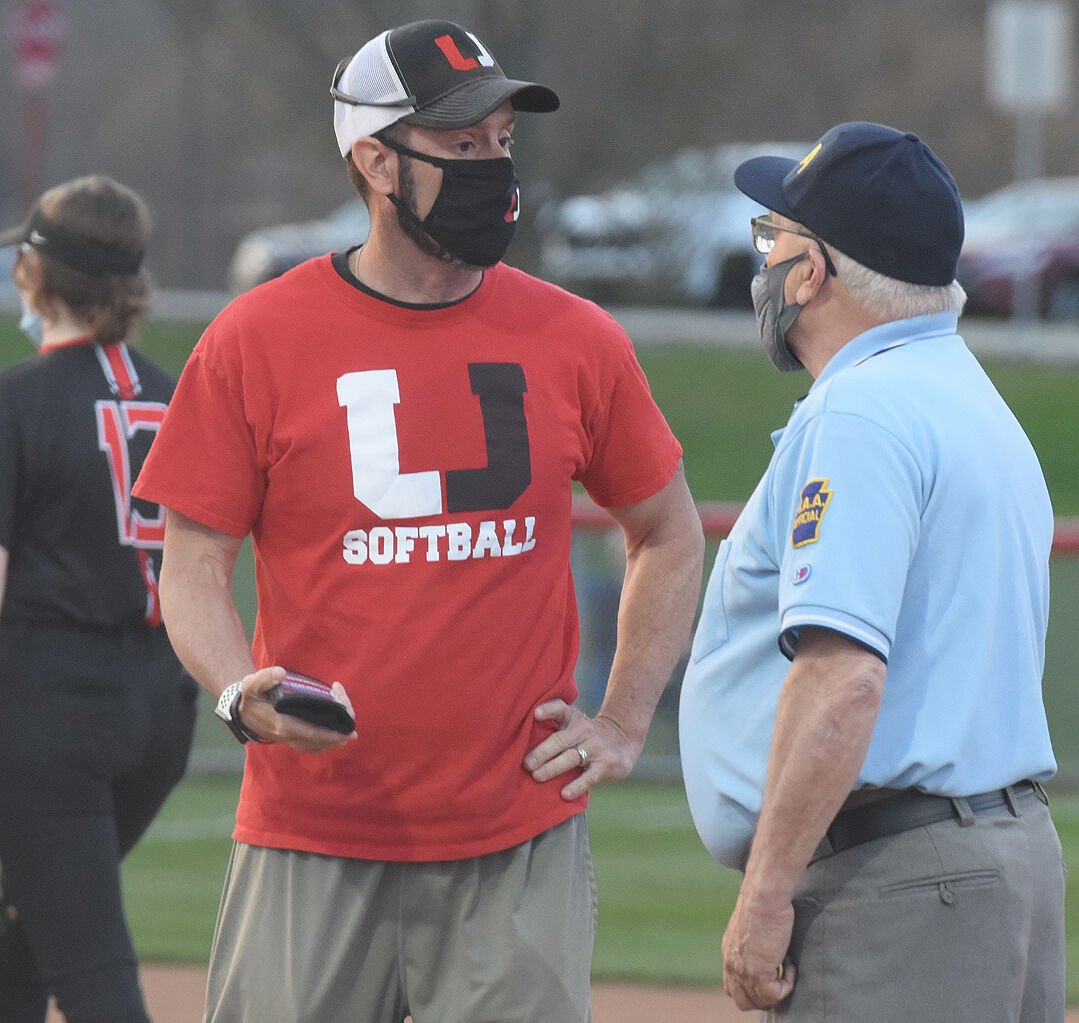 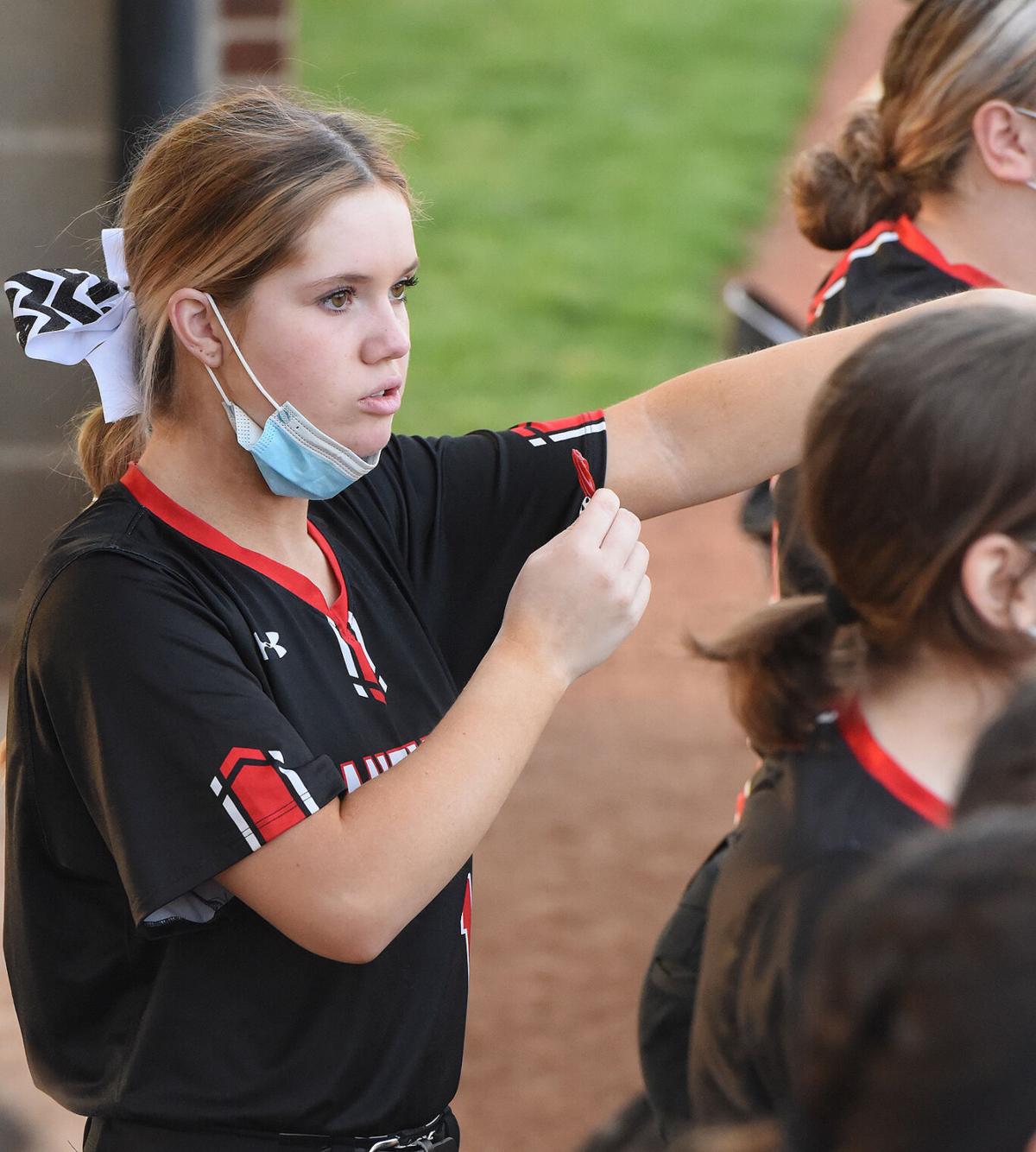 Upper St. Clair's Kerri Albertini enjoys a piece of licorice in the dugout as her team bats. 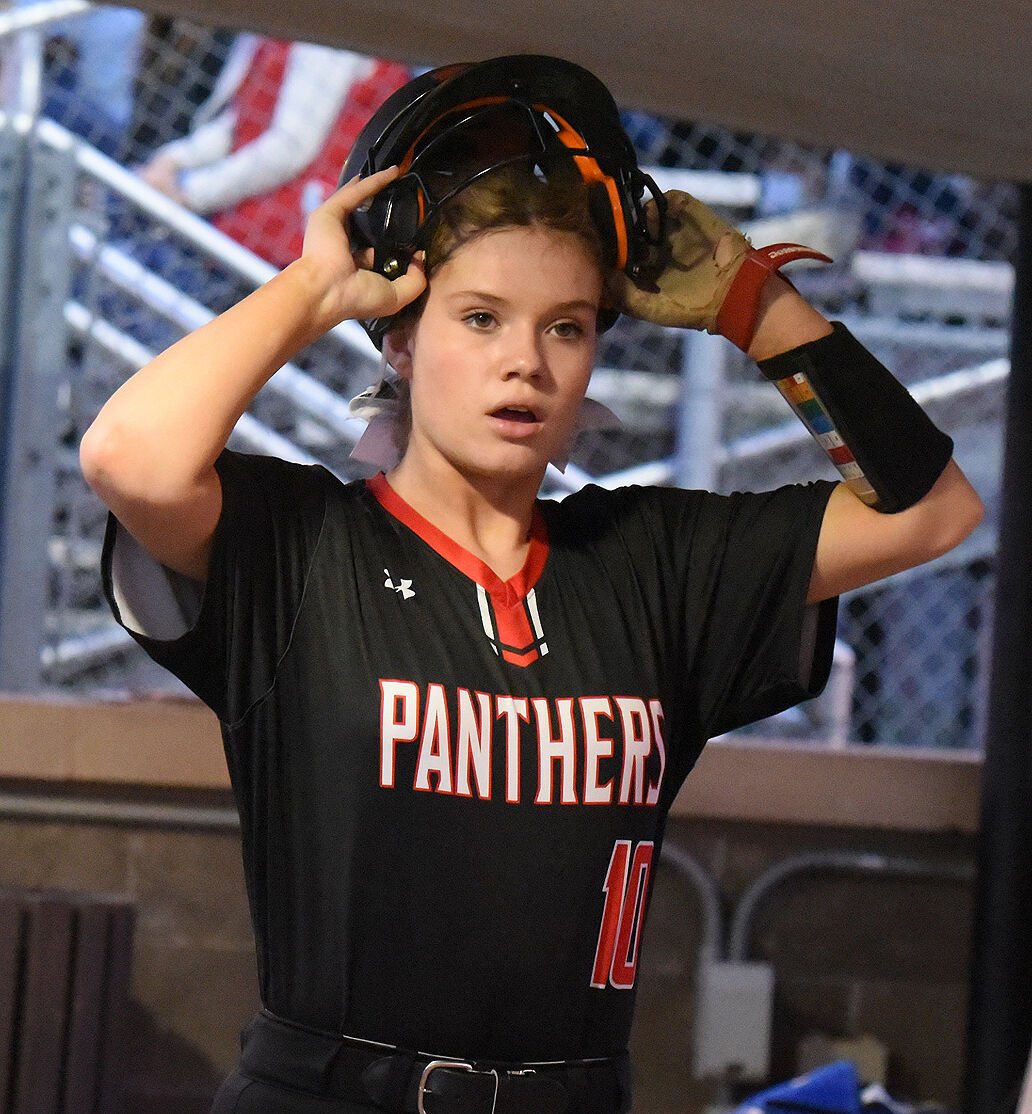 Kerri Albertini is the lone starter returning to the line-up for the Upper St. Clair softball team this spring.

Emma Redlinger delivers a pitch to the plate against South Fayette.

Upper St. Clair’s Kerri Albertini keeps her eye on the ball as she is about to make contact against South Fayette.

Upper St. Clair's Kerri Albertini enjoys a piece of licorice in the dugout as her team bats.

Kerri Albertini is the lone starter returning to the line-up for the Upper St. Clair softball team this spring.

In the four years since Bill Aguglia took over as head coach of the Upper St. Clair softball team, he said he has built “some real momentum” with the program.

In 2020, he had the Panthers primed to make a long WPIAL Class 6A postseason run before concerns over the spread of COVID-19 caused the season to be canceled.

Aguglia said the virus has left “lingering” issues in 2021.

Some USC players decided not to compete for various reasons, while some had to quarantine at the start of this season because of possible exposure to the virus.

“We are very excited,” Aguglia said of the prospect of playing softball this spring. “It has been a long wait to get to this point, but the uptick in COVID cases makes every day an adventure. The pandemic is scary and being back together is not comfortable for everyone.”

The Panthers also are adjusting to a new division.

USC moved down from Class 6A and now competes in Section 4 with perennial powers like West Allegheny and Trinity. West Allegheny has won three consecutive WPIAL titles since the inception of Class 5A in 2017.

Additionally, South Fayette, Moon and Chartiers Valley will provide tests for the Panthers, who are off to an 0-2 start.

The Panthers’ exhibition schedule features North Allegheny, North Catholic and Burrell, but they will play only one former rival this spring. USC will host Mt. Lebanon May 12 at Boyce-Mayview Park.

The Blue Devils are expected to make noise in Class 6A.

“Rivals are created not due to where you live but how you compete,” Aguglia said. “We knock off one of (our section opponents) then all of a sudden we are a rival. But, I guarantee nobody is looking at us as a favorite against any of the teams.”

That is because the Panthers return only one starter from the 2019 squad.

Senior Karri Albertini starts behind the plate. She smacked a triple in USC’s section opening 7-5 loss to South Fayette March 30.

Albertini is a settling influence on a young unit that features Emma Redlinger on the mound. The junior had a solid outing against the Lions. She struck out nine and scattered two walks and nine hits, as the Panthers committed four fielding errors.

“Emma has big shoes to fill,” Aguglia added of the junior as she attempts to replace all-section pitcher Danielle Orendi. “Nobody I have ever coached works harder than Emma. I believe she is primed for a breakout season.”

Besides the Redlinger-Albertini battery, the Panthers are relying upon second baseman Madison Fisher, third baseman Ava Pries and shortstop Elisa Tucker. Emily Teklinski rounds out the infield at first base.

“Pitching and defense is the way we are built,” said Aguglia.

“While I don’t think our infield could match what I had the last few years, what I am seeing, though, is very encouraging. The outfield was hit early with injuries and the like. Now that we are all back and healthy, we could be very good there as well.”

Depth and experience are concerns for the Panthers. Senior Madelynn Myke and junior Lizzie Salinas, as well as freshmen Kierston Beerel, Olivia Wunderlich and Violet Swigart, round out the squad.

“We have four players on the team this year with limited softball experience and when you only have a roster of 14 it can make it very tricky especially when quarantining/contract tracing is very real,” said Aguglia.

Nevertheless, the Panthers plan to be competitive this spring and long into the future.

“The goal every year is to make the playoffs,” said Aguglia, who pointed to 2019 as the first year USC reached the playoffs in 20 seasons. “Under my watch I want it to be we are in the playoffs every year. It won’t be easy as our section is loaded, but we are up for the challenge.”

Stephanie Binek earned the win on the mound against USC. She struck out four and scattered 10 hits.

The Lions return to section action April 7 when they host Trinity at 3:45 p.m.

The Panthers host Moon at 3:30 p.m. April 7 at Boyce-Mayview Park and follow with a home date against Western Beaver at 4 p.m. April 9.