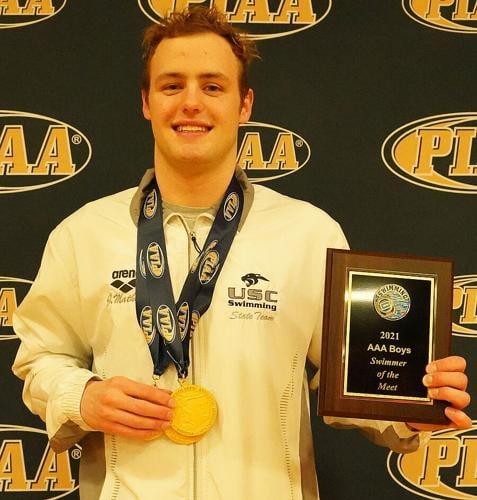 Upper St. Clair’s Josh Matheny shows off the gold medals he won and the swimmer of the meet plaque he was awarded during the PIAA Class AAA swimming championships. 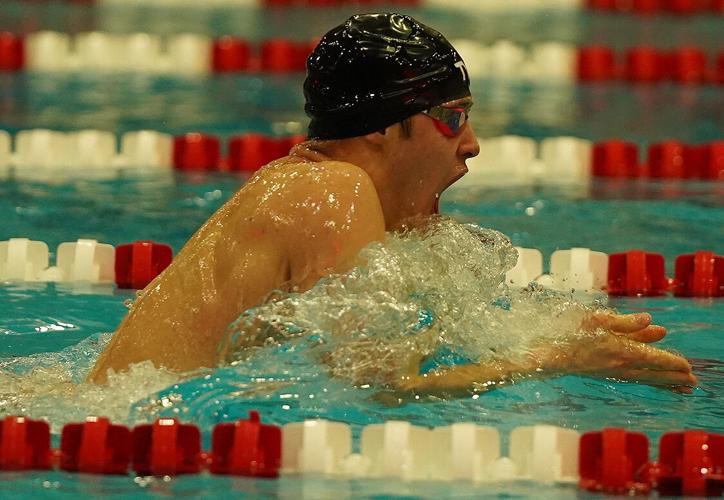 Upper St. Clair’s Josh Matheny pulls through the water during the 100-yard breaststroke race at the PIAA swimming championships. 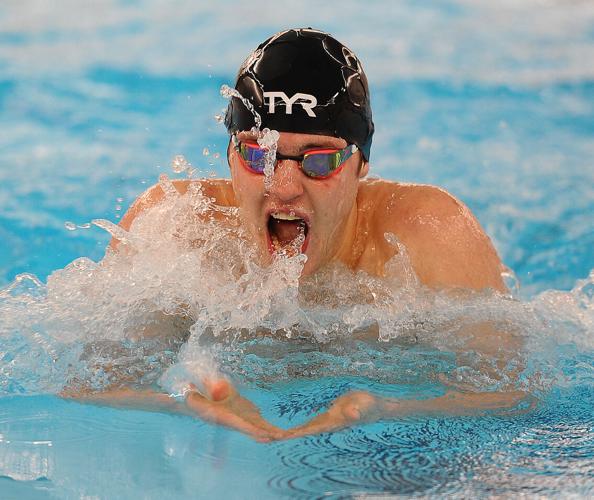 Josh Matheny of Upper St. Clair broke his own WPIAL record in winning his fourth gold medal in his signature swim, the 100-yard breaststroke.

Upper St. Clair’s Josh Matheny surfaces for air during the butterfly leg of the 200-yard individual medley at the WPIAL championships.

Upper St. Clair’s Josh Matheny shows off the gold medals he won and the swimmer of the meet plaque he was awarded during the PIAA Class AAA swimming championships.

Upper St. Clair’s Josh Matheny pulls through the water during the 100-yard breaststroke race at the PIAA swimming championships.

Josh Matheny of Upper St. Clair broke his own WPIAL record in winning his fourth gold medal in his signature swim, the 100-yard breaststroke.

Upper St. Clair’s Josh Matheny surfaces for air during the butterfly leg of the 200-yard individual medley at the WPIAL championships.

Josh Matheny wasn’t satisfied after winning three gold medals at the WPIAL swimming championships in his own pool at Upper St. Clair High School. He said there were things that needed to be cleaned up.

Two weeks later, Matheny cleaned up at the PIAA Class AAA championships held March 20 in Cumberland Valley High School’s natatorium. He ran away with Swimmer of the Meet honors after his three-gold medal performance.

“Definitely, there were flaws in my (WPIAL) swims,” Matheny said. “I needed to refocus and tweak some little things.”

Technically sound and strategically savvy, Matheny used his signature swim – the breaststroke – to propel him to a state title. He also shattered his own national record in the process.

For the fourth year in a row, Matheny won the 100-yard breaststroke event.

While David Nolan, a Stanford graduate, won four state titles, three at the Class AA level, while swimming for Hershey High School, it is believed Matheny’s feat is the only one accomplished at the Class AAA level.

“It’s something you don’t really think about,” said USC head coach Dave Schraven, who also swam at Stanford. “It’s pretty cool, though, that Josh has been able to achieve that. All his accolades are important and a springboard for the next level.”

Matheny will swim at Indiana University in Bloomington. This summer, he may have the opportunity to compete in the Summer Olympics in Tokyo. He is already qualified for the U.S. Olympic Trials to be held in June in Omaha.

Matheny became the first high school swimmer in state history to break 52 seconds in the 100 breast. Matheny won the event in 51.84 and shattered his PIAA and NFHS record in the process.

“It feels very neat,” he said. “I was excited to see what I could do and breaking that record was the icing on the cake.”

For Matheny, winning the 200-yard individual medley was equally significant. He won the race in 1:47.54 to beat Daniel Simoes from Seneca Valley by nearly three seconds.

“The IM meant more to me than winning the breast because it was the first time I had won it,” he said.

Because Matheny was disqualified on the start in his preliminary heat last year, he had to sit on the sidelines and watch the finals.

“So this was sweeter,” he said.

The win also validated Matheny. He had finished runner-up to Simoes at the WPIAL meet.

“It was hard for Josh to lose that race at WPIALs but he was not shaved or rested,” Schraven said. “We knew Josh had a 1:47 in him so we put our eggs in the state basket and it paid off.”

Matheny’s running start off the blocks and his 23.3 breaststroke leg enabled Upper St. Clair to start the meet with a gold medal in the medley relay. The unit also consisted of Ganesh Sivaramakrishnan (back), Jason Zhang (butterfly) and Ryan Senchyshak (freestyle). The group clocked a 1:33.33 time, good enough for All-America consideration.

“The medley relay was a great way to start off the meet,” Matheny said. “I was happy with my split because it set up the rest of the meet for me. I knew I was swimming really fast.”

After the relay, Schraven said he knew “good things would happen” later in the meet because Matheny has never before been under .24 on his leg in the relay. He said the 100 breast had been contested earlier in the meet, Matheny would have lowered his national record further.

“We were happy but we all knew that Josh was going to go faster,” Schraven said. “Based on our research and after we swapped Ryan in for the freestyle, we felt confident what this relay was capable of doing. No one could hang with us, especially with Josh. The leg he swam was college level, NCAA Division I-like.”

For his two individual gold medals and win in the medley relay, Matheny captured the meet’s most prestigious award.

“It was something he wanted. It was something important to him,” Scraven said of Matheny being named Swimmer of the Meet. “I felt if he does what he is capable of doing, I couldn’t imagine it not being him. It’s nice when things work out as you hoped they would. Josh fulfilled every expectations we had of him.”

Matheny, too, was pleased.

“I wanted it,” he said. “To actually win it was the perfect way to end my high school career. It’s special. You go into every race with the attitude that you want to win and you wish you will do well but when it happens it’s amazing. I did my best times and swam as fast as I could.”