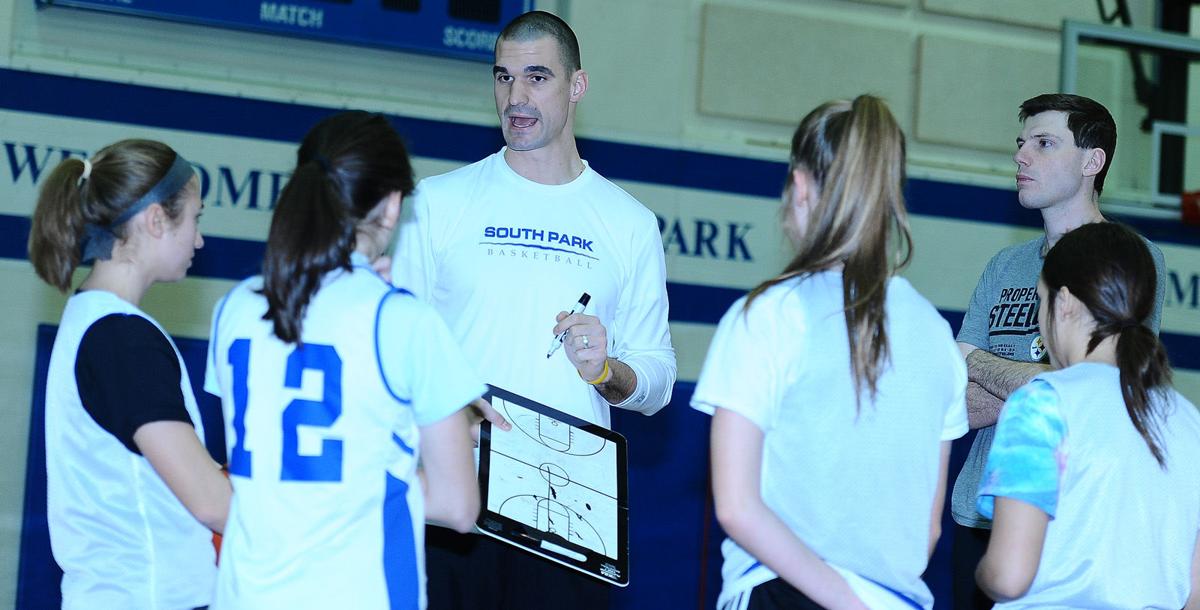 Garrett Del Re conferences with his players concerning strategy for an upcoming opponent. 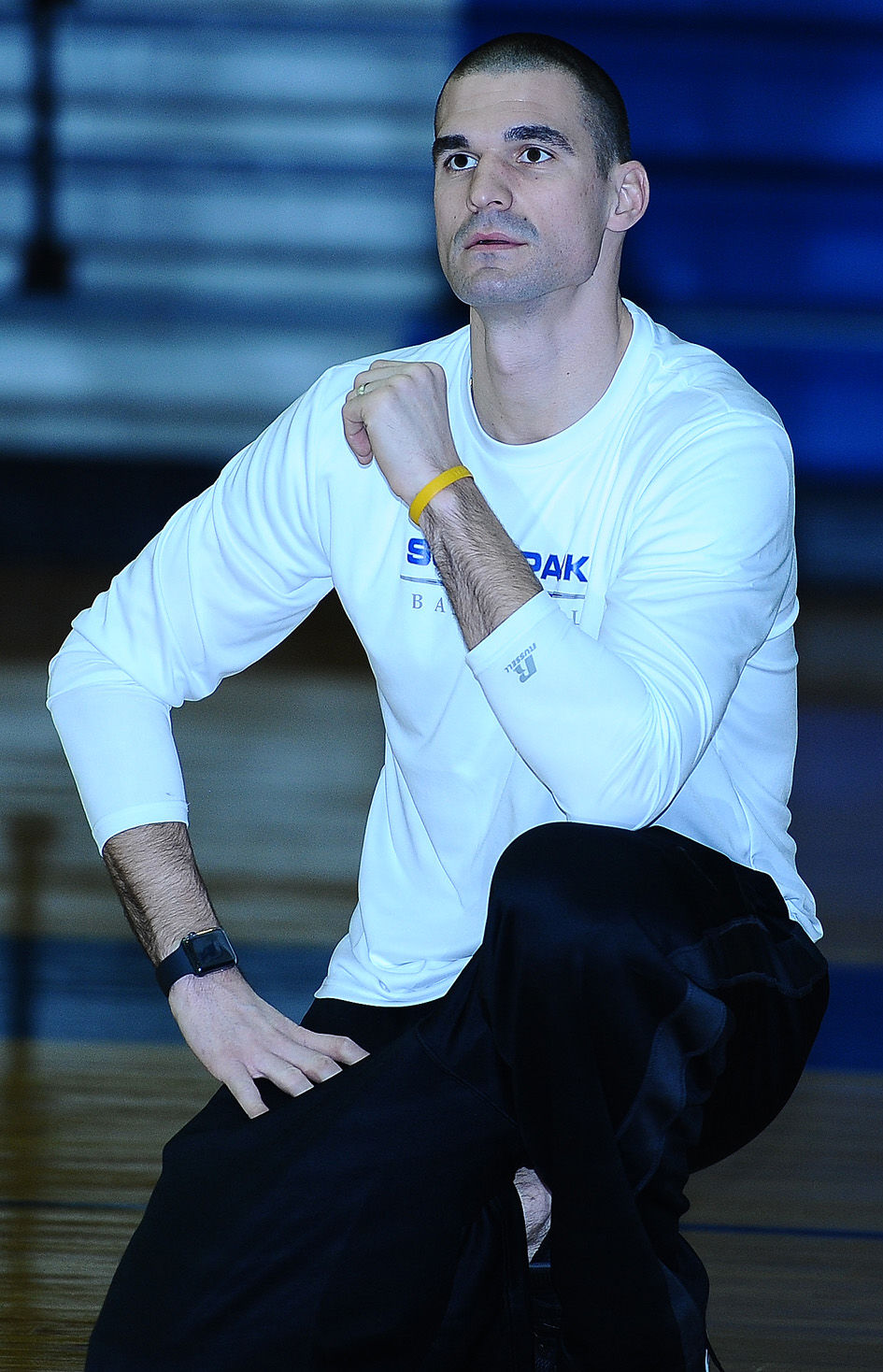 Garrett Del Re watches as his team practices. 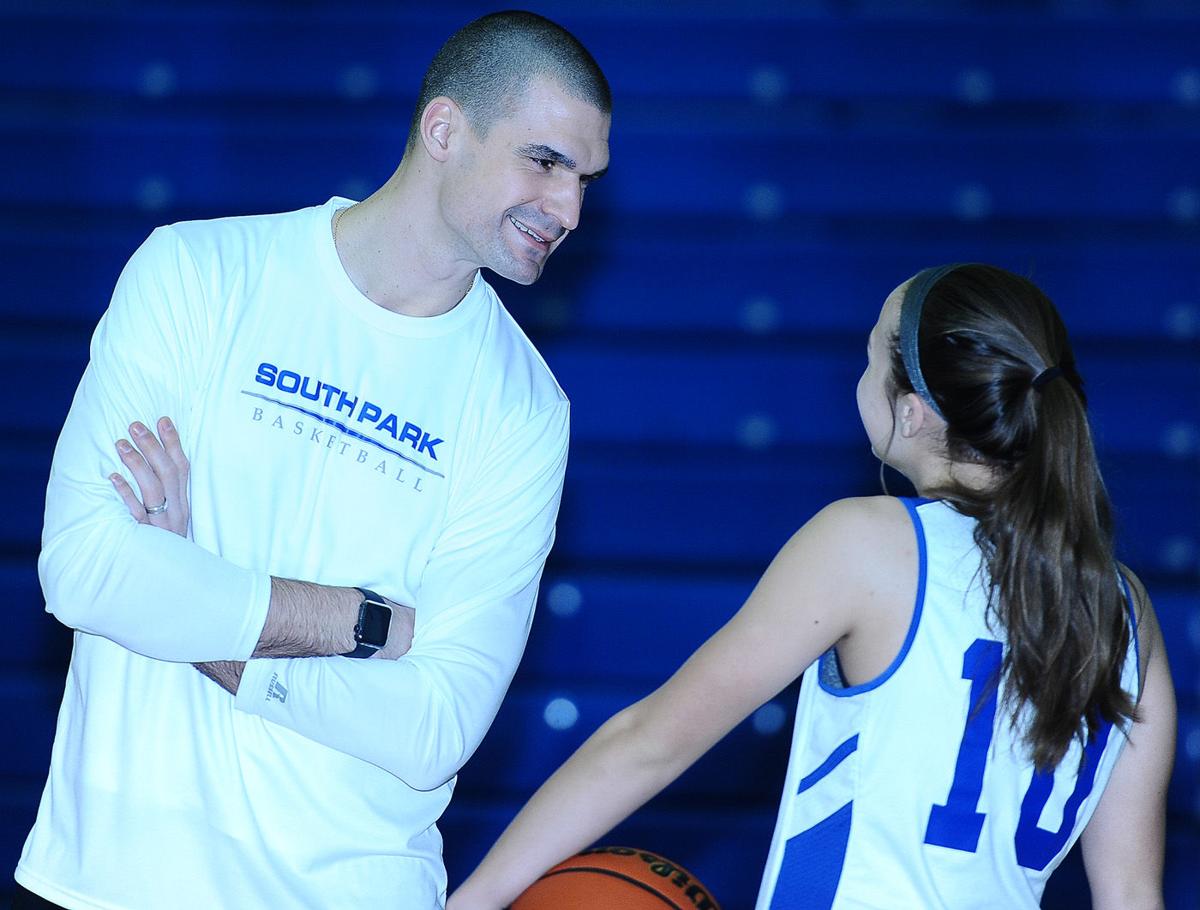 Garrett Del Re shares a laugh with Nora Ozimek during practice. 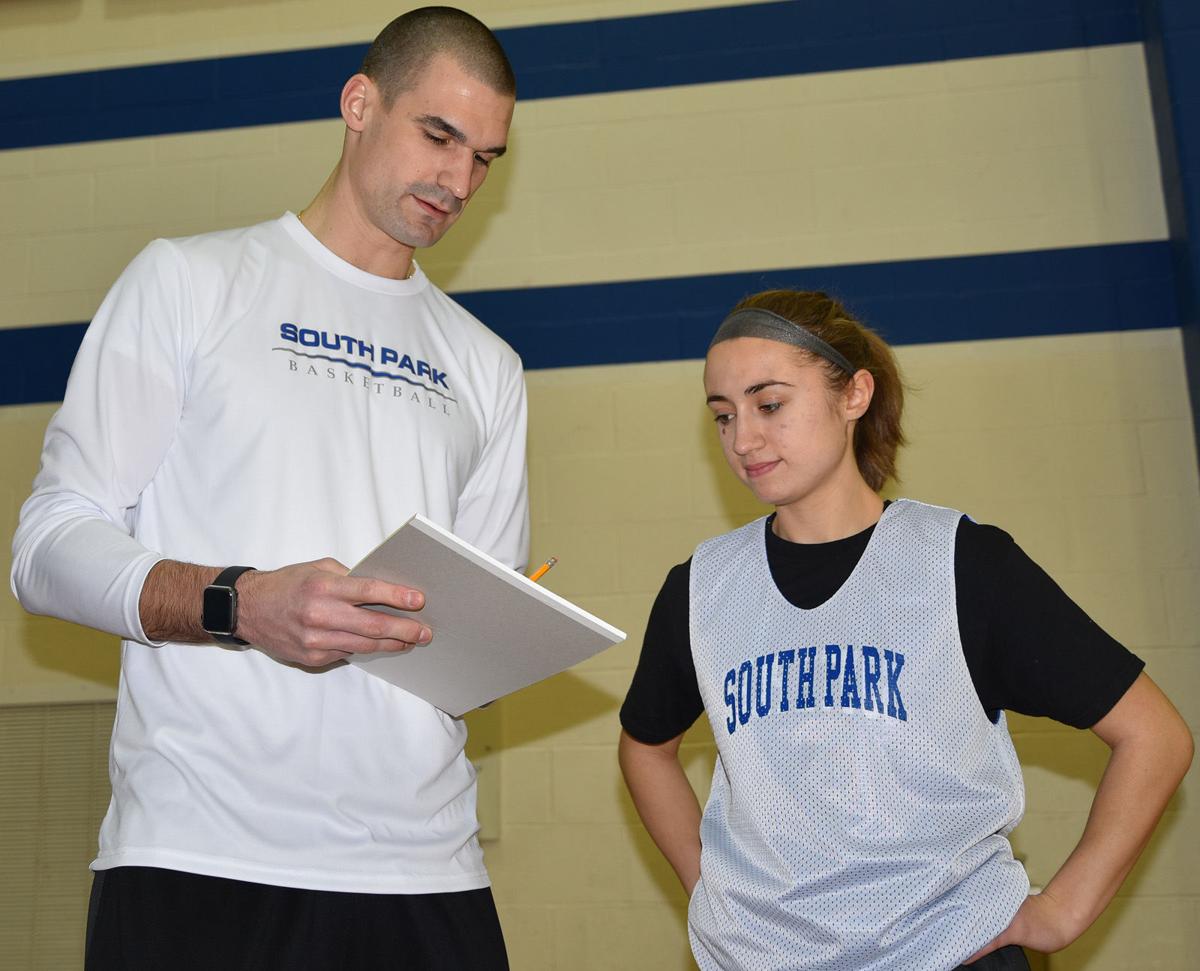 Garrett Del Re diagrams a play for Danielle DeProspo during a South Park girls' basketball practice. 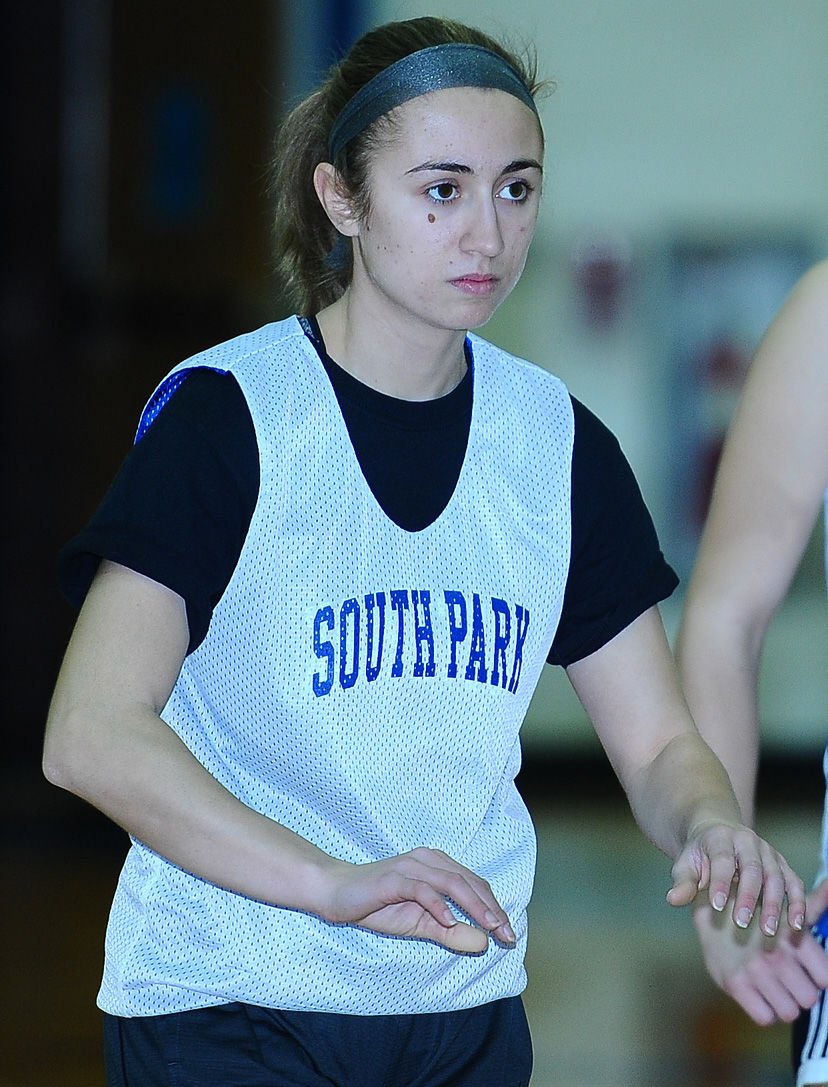 Garrett Del Re conferences with his players concerning strategy for an upcoming opponent.

Garrett Del Re watches as his team practices.

Garrett Del Re shares a laugh with Nora Ozimek during practice.

Garrett Del Re diagrams a play for Danielle DeProspo during a South Park girls' basketball practice.

Maybe it’s because he was born on Valentine’s Day, but Garrett Del Re is an intensely passionate person, particularly when it comes to basketball.

As a player, his temperament pushed Upper St. Clair to an appearance in the WPIAL semifinals.

“Garrett was emotional in a positive way — a passionate kid,” said USC head coach Dan Holzer. “He played real hard and wanted to do well. He wore his emotions on his sleeve. He was impactful.”

After a short stint playing at Bethany College, Del Re returned to USC and served as an assistant coach to Holzer. Though only 19, he left a similar imprint.

“As an assistant, he was very similar as a player, very passionate, wanted to learn and get better,” Holzer said. “If he felt strongly about something, he would suggest it. That’s a good quality. You want that. He was ahead of his time. He understands the game and that goes back to his emotions and passion.”

Del Re is now applying his fiery attitude at South Park High School. In his first head coaching assignment, the 28-year-old Bethel Park resident has the Eagles poised to make a run at a WPIAL Class 3A title.

Under Del Re, the Eagles captured the Section 2 championship. They finished the regular season at 14-8 overall.

South Park’s Danielle DeProspo, who averaged a team-high 15 points per game, said she warmed up to Del Re quickly.

“I’m a pretty fiery player, so I can appreciate him calling me a ‘hot head’ because you can see his passion in his coaching and in everything he says and in the expression on his face,” she said.

“He always says that no matter whether we are winning or losing, he is either going to be the happiest or the angriest person in the room. I just love that,” she added. “That’s something we all can get behind because we all share a bit of that.”

DeProspo also shares Del Re’s toughness and drive as a two-sport athlete. While Del Re played football for the Panthers, DeProspo also played soccer for the Eagles. An honors student with a 4.4 GPA, she said she will study architecture at either Ohio State or Kent State next fall.

DeProspo embraces Del Re’s motivational tactics because he has a vast knowledge of the game.

“He has a strong personality and he knows how to instill fear the right way and in the right amount,” she said of Del Re. “While it doesn’t happen often, he definitely has the ability to joke around to lighten the mood when we are all working so hard. He definitely knows what he is talking about.

“We respect him a lot and he has done a phenomenal job. Better than anything Taylor (Glowa) and I could have hoped to have for our last year,” she added of her senior teammate.

While coaching under Holzer, Del Re was able to pursue his education certification by commuting to California University of Pennsylvania. He he is currently working on his master’s degree at Marshall University, which is near the school in Morgantown where he is employed as an educator.

“Having played for him and being able to go back at a young age and absorb as much as possible was immeasurable,” he said. “Being in the coaching room is a lot different and I learned so much from watching his habits. He’s the best at what he does. I don’t think anybody watches more film than he does.

“Danny always has his teams prepared and I try to have my girls always ready for their opponents. He was a great mentor for me. Often he’d stop and teach me things. I could not have picked anyone better than him to work under.”

After his five-year stint at USC, Del Re worked one season under South Fayette girls basketball coach Brian Bennett. Bennett, who teaches at USC, was also an assistant coach under Holzer.

“I owe a lot to Brian as well because he was a teacher at school for me, but as coaches, I got to work more on a peer level with him,” Del Re said. “We became close because we have similar coaching styles.”

Del Re said Bennett shaped him into the coach he is today and taught him about the game, while Holzer helped him tamp down his emotions.

“While I am still trying to perfect it,” he said, “Danny does have a lot of patience and I’m an excitable guy. Danny is a fantastic game manager. He has seen it all. He has done it all. When a game comes down to the wire and it demands you keep calm on the floor and manage the clock and possessions, I think about Danny.”

When it comes to objectives, Del Re said he recalls Bennett’s teachings.

“It’s all about expectations,” he said. “You have to let the kids know clearly what you want of them. If you are clear day in and day out, then you will see results.”

Del Re did not have much time to map out many goals. He took the position at South Park just as the season started Nov. 18.

The Eagles spent the first part of the season getting to know each other and developing a team identity.

Del Re fashioned his starting line-up around natural leaders DeProspo and Glowa alongside sophomores Nora Ozimek, Kierra Moeller and freshman Maddie Graham. The Eagles also rely upon freshman Maurie Haddad and junior Cassie Klocek for quality minutes off the bench.

“Danielle is a great shooter and she can get to the rim, but her leadership on the floor is impactful because she settles us down,” Del Re said. “She buys into what we want to do. She’s like having a coach out there on the floor.

“Taylor is the one of the most intense athletic girls I have seen in the game. She will walk up and take on their best player. As a point guard, she gets us into our offense well.”

Confidence in their abilities enabled the Eagles to overcome adversity in the first half of the campaign. South Park started the season 0-3 with losses to Baldwin, Woodlands and Armstrong.

Then after improving to 3-5, the Eagles reeled off four straight section wins before losing on a buzzer-beater by Seton La Salle.

Del Re said that loss to the Rebels ignited a seven-game section winning streak that culminated in South Park’s league-clinching 46-40 win over Seton Feb. 6.

“Because the season came up so quickly, I can’t say that I set many goals, but the first would have been to win the section title,” he said. “We had to keep our fingers crossed because we really didn’t want to have to share it with any of our opponents.

“From my perspective, I could not be happier to make a memory like this in my first year of coaching,” he added. “For this group, though, it was their second in a row and they are all elated. But I think (the section title) speaks to the progression we have made as a team because only two players have had any significant playing experience before this year. So each day we took a step forward and the results speak for themselves.”

South Park will open the WPIAL playoffs as the No. 3 seed, which carries with it a first-round bye in the Class 3A bracket. The Eagles will play the winner of the Feb. 19 first-round game between Avonworth and Brownsville.