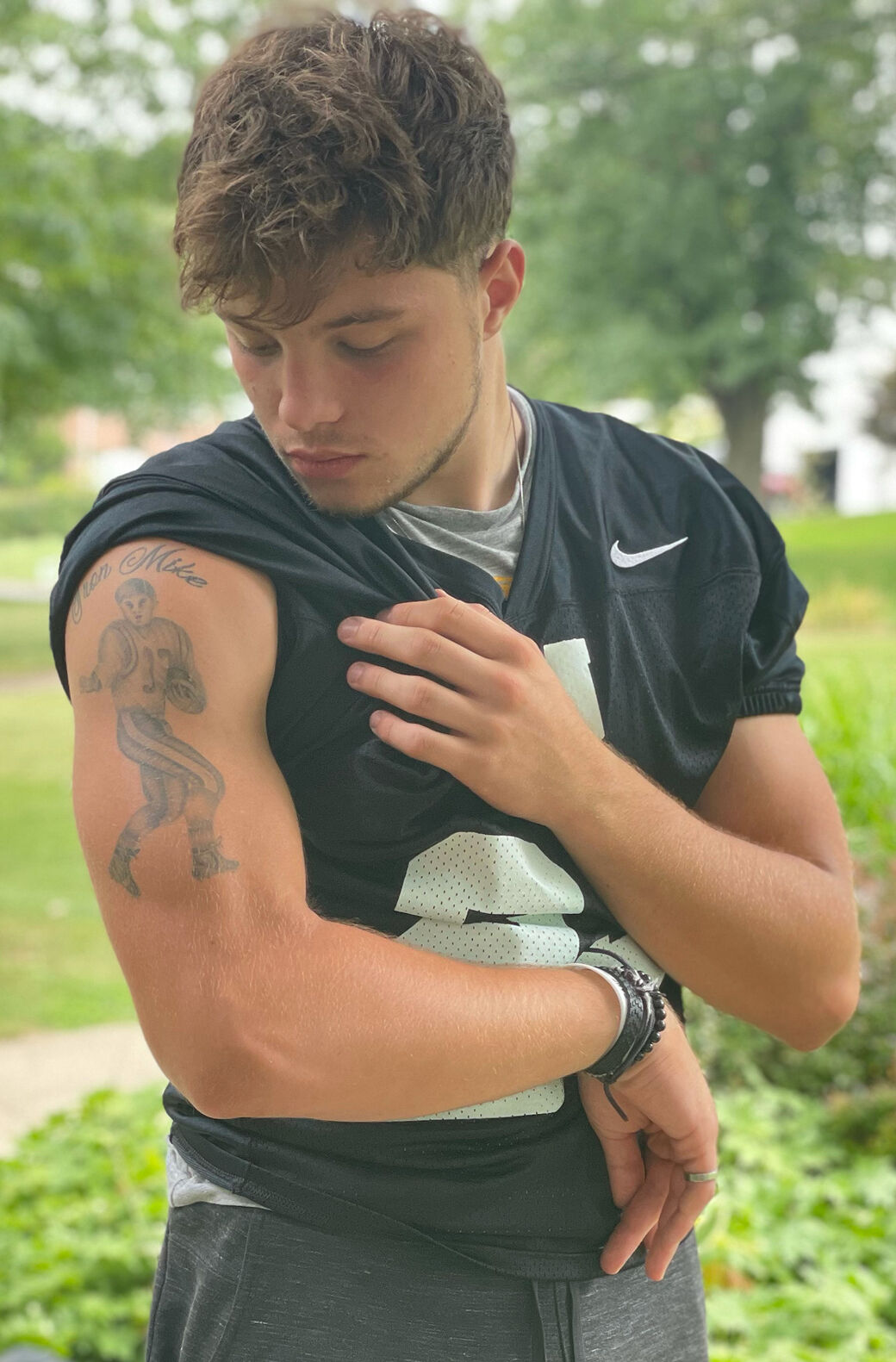 Ethan Hiester displays the tattoo he has inked on his right bicep in honor of his late grandfather Michael R. Graczyk. 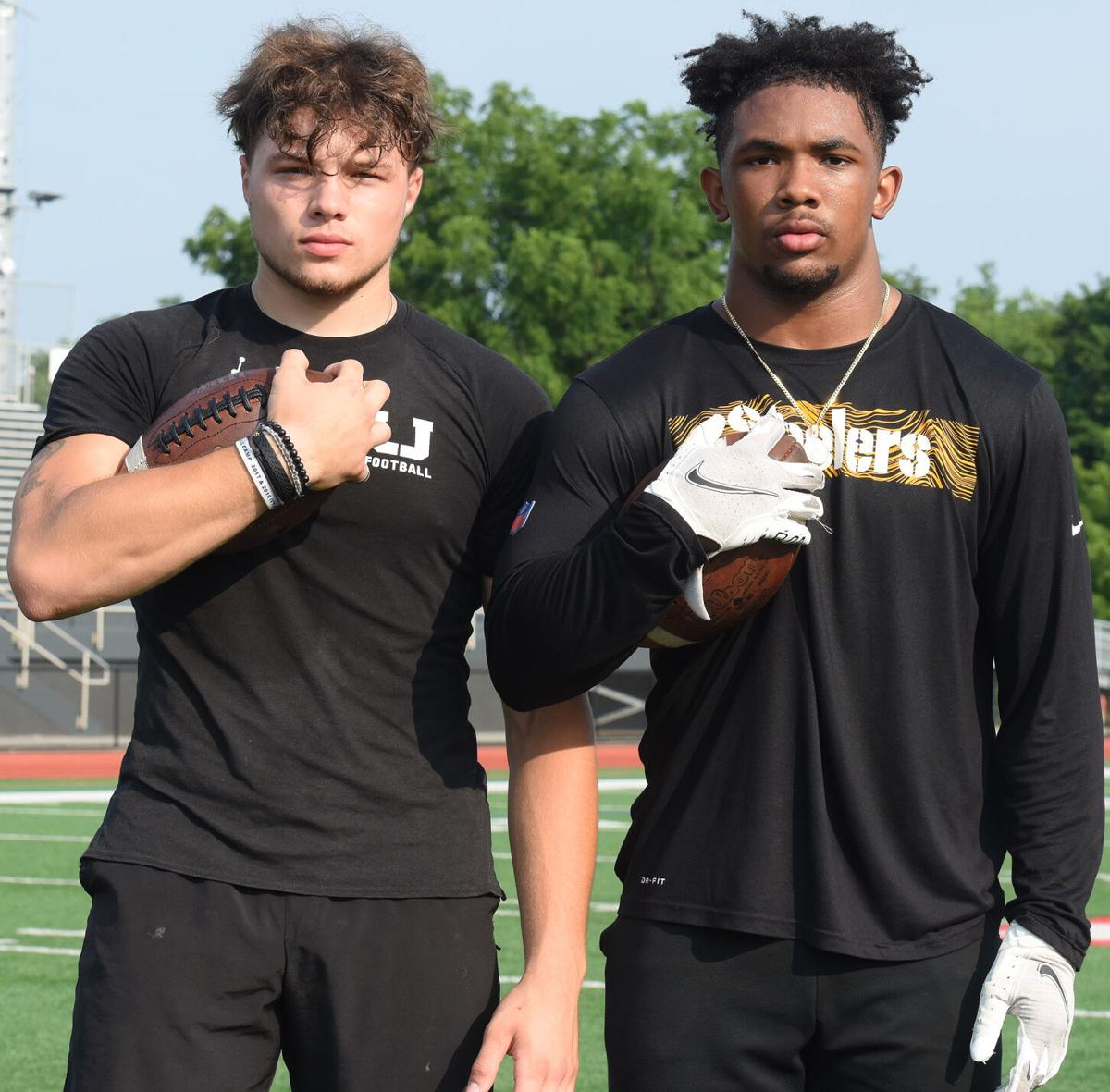 Ethan Hiester, left, and Jamaal Brown are expected to be a potent one-two punch in the backfield for Upper St. Clair this fall. 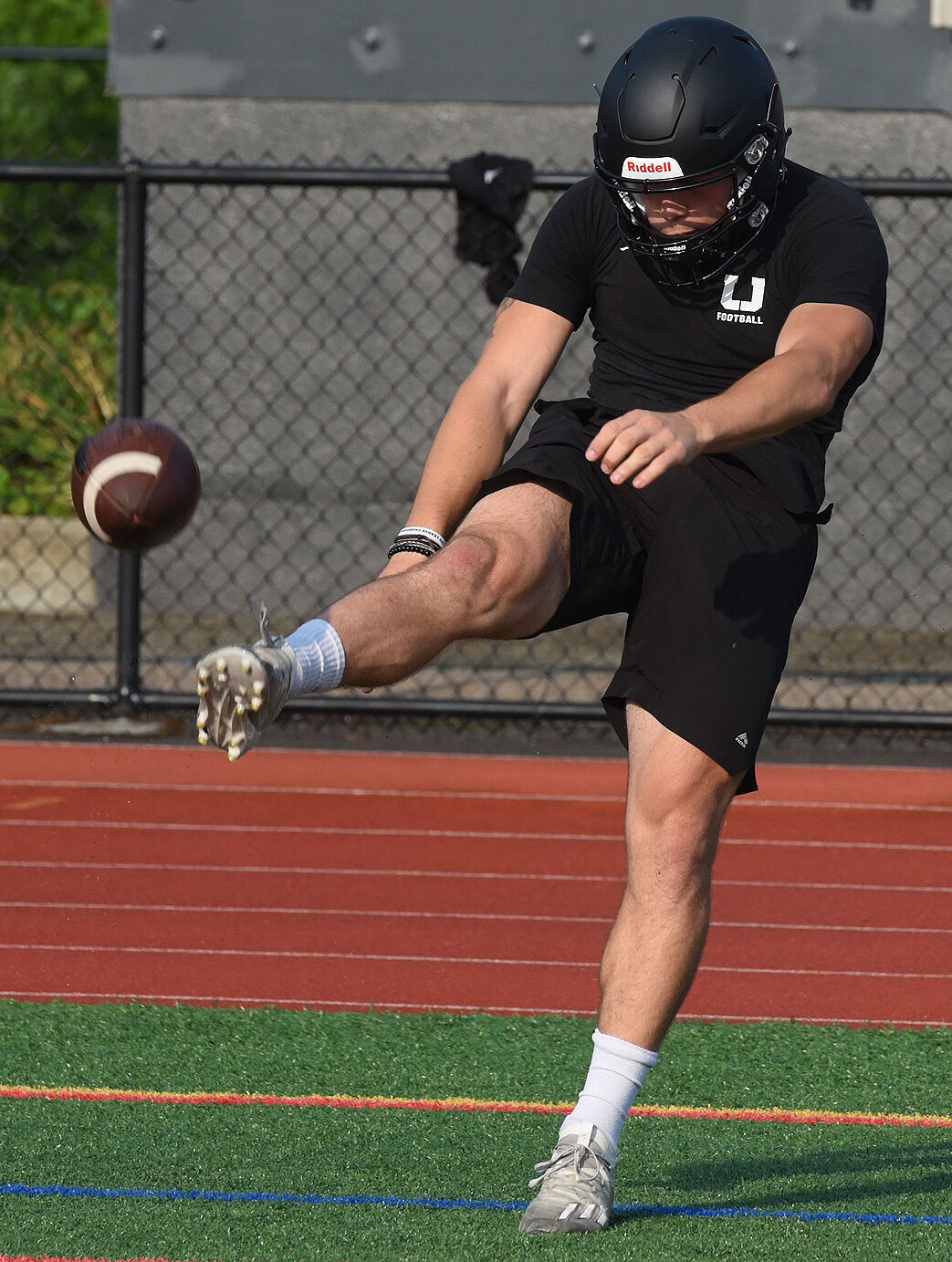 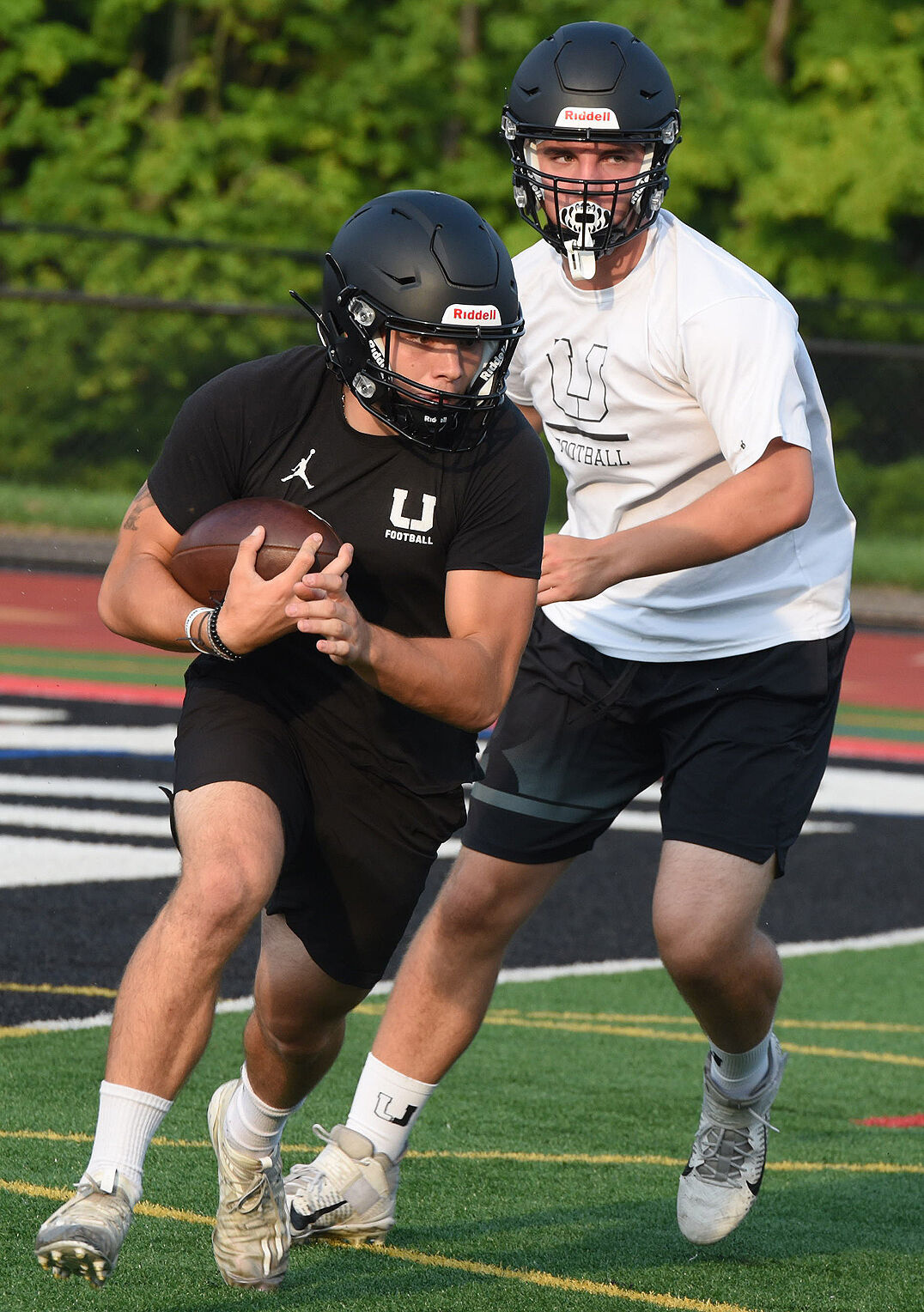 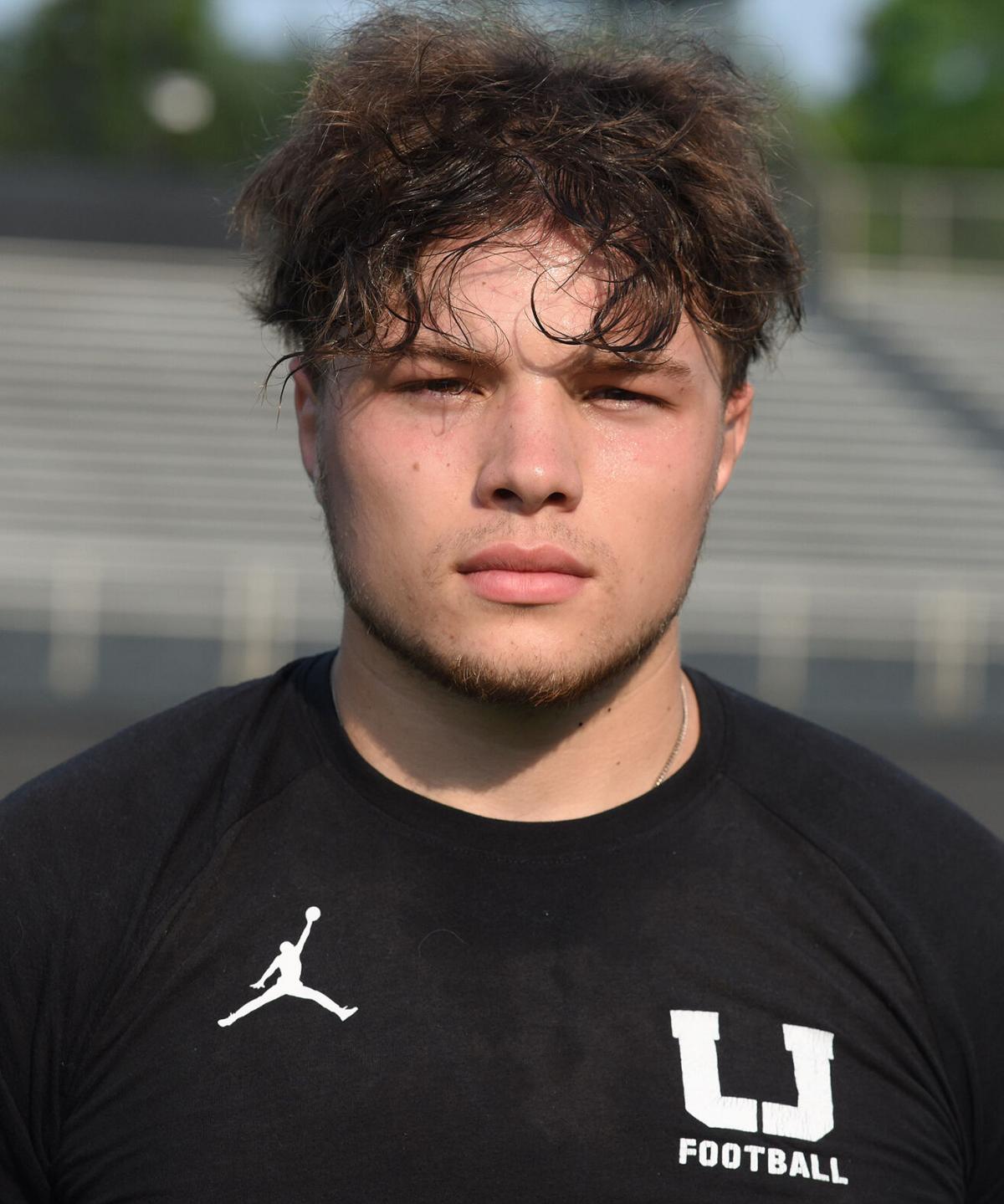 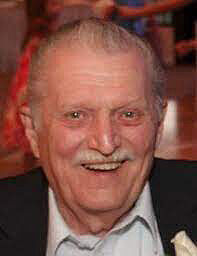 Ethan Hiester displays the tattoo he has inked on his right bicep in honor of his late grandfather Michael R. Graczyk.

Ethan Hiester, left, and Jamaal Brown are expected to be a potent one-two punch in the backfield for Upper St. Clair this fall.

Ethan Hiester of Upper St. Clair wears his heart on his right bicep, where he had an image of his grandfather “Iron” Mike Graczyk tattooed.

“He was a good soul, always had a smile on his face no matter what happened,” Hiester said. “He was all happiness and joy. Nothing could break him down, like iron.”

The same can be said of Hiester as he tackles his fourth varsity season as a two-way starter for Upper St. Clair.

Hiester rushed for 317 yards and scored five touchdowns out of the backfield for the Panthers in 2020. He rushed for 421 yards and one score his sophomore season.

An outside linebacker, Hiester also accumulated 103 career tackles and 14 for losses. He intercepted two passes, forced two fumbles, recovered two more and registered two sacks. He accumulated 24.5 tackles and 3.5 more for losses as the Panthers posted a 5-3 record in 2021.

Heister is also an all-conference punter.

“His grandfather was a great influence,” Junko said. “He’s the inspiration for Ethan’s approach to the game. The two of them shared a special bond.”

Junko said Hiester would regale the team with stories about his grandfather and the passion they had for the game.

“They loved football and enjoyed every minute they shared together,” Junko said. “Ethan will always hold him near.”

Hiester maintains a 3.7 GPA and is attracting interest from Ivy League Schools such as Yale and Columbia as well as Walsh University and Pitt. He also belongs to National Honor Society and volunteers with South Hills Miracle League as well as Partners in PE, both of which cater to special needs athletes and students.

“Ethan always talks about not just relying on talent and the importance of hard work,” Junko said. “He pushes himself to the limit. That’s a lesson he learned from his grandfather and it has impacted his life.”

In sixth grade, however, Hiester started playing football for Naviglia.

“I wouldn’t be here without (Naviglia),” Hiester said.

While playing for the RYFO Rams, Hiester taught himself to punt. With a 38.6-yard average, he is now ranked by PA Rivals as one of the top punters in the state

“Actually, we never had a punter because we always went for it on fourth down,” Hiester said. “So, I decided to try it at a practice once and was good at it. Self-taught, don’t mess around with technique. It was just something pretty cool for me.”

Now, Hiester is attempting to become the first USC player to be named to the all-conference team for three straight seasons since Lee.

One of his idols, Hiester owns a helmet autographed by Lee that he won in a raffle.

At 5-10, 200 pounds, however, size may be an issue for Hiester at the professional level.

“It poses a lot of struggles in the recruiting process but I don’t let that define me,” he said.

According to Junko, Hiester compensates for a lack of size with grit and determination.

“Ethan is one of our hardest working guys. Off the field, he’s at every lifting session and every offseason practice. He has grown as a leader,” Junko said. “He has been a talented young man that played in the shadows and now he is getting an opportunity to step in a role and follow their example.

“We are fortunate he embraced that culture and that is what makes him a successful football player. He understands the intangibles and he does a great job of being a representative of our culture.”

Hiester will be asked to share the spotlight in the backfield with Jamaal Brown. The junior accumulated as many yards rushing last season as Hiester did. Both ranked second on the team in rushing behind Ethan Dahlem, who is now a quarterback at Case-Western.

“It’s a great luxury having those guy back in the backfield, especially with our youth,” Junko said. “Ethan is going to continue to be a big part of our Friday nights because he never comes off the filed. He never seems to get tired or wants to rest. He’s willing to do all that is asked of him.”

Book: Harry Potter. “I liked the books growing up.”

Movie: Saving Private Ryan “It defines me and how I never let anybody behind. It’s about sticking together.”

Favorite athlete: New York Giants running back Saquon Barclay “I remember whenever I went to a Penn State game and I was up on railing, one player stopped and shook my hand. It was Saquon. I’ve been a fan every since.”

Dream Destination: Italy and Australia. “I plan to travel to both some day. My family history is Italian and I have always wanted to go to Australia.”

People might be surprised to know this about you: My first sport was actually swimming. I did the butterfly and I placed at states when I was younger and swimming with the Allegheny Gators.”

Person you would like to have dinner with: Patrick Tillman. “His story is something special.”

Lesson sports has taught you: “Sports taught me to be and believe in myself and not the naysayers. No matter what people do around you, you can only control what is in your hands and what your body does. We all have our part to do. It’s the same with your job and with life.”

In 15 years, I will be: “Playing in the NFL hopefully in New York for the Giants. That would be my dream team.”