Steve Hilty fends off Greg Kinzler as he chases down the ball during a water polo scrimmage. 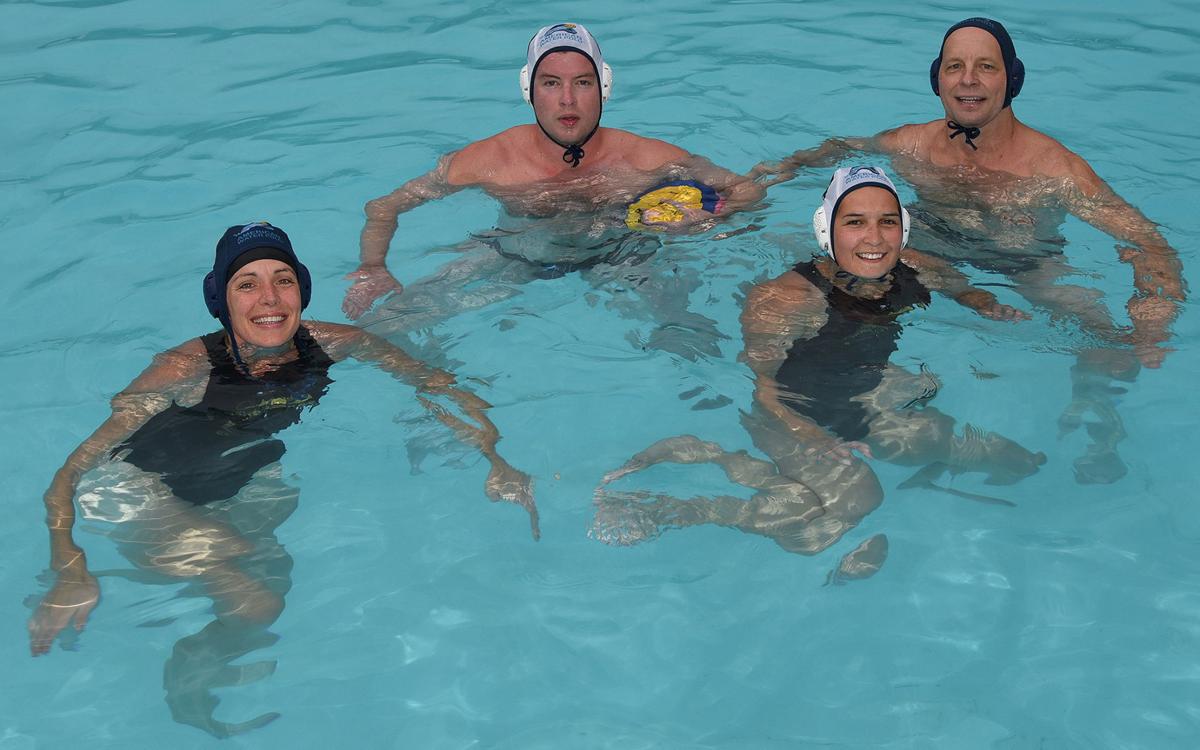 Pictured are some of the members of the Pittsburgh Renegades practicing at Ammon Pool, the largest of the City of Pittsburgh facilities. From left are: (front) Jocelyn Vincent and Claudia Smith; (back) Steve Hilty and Greg Kinzler. 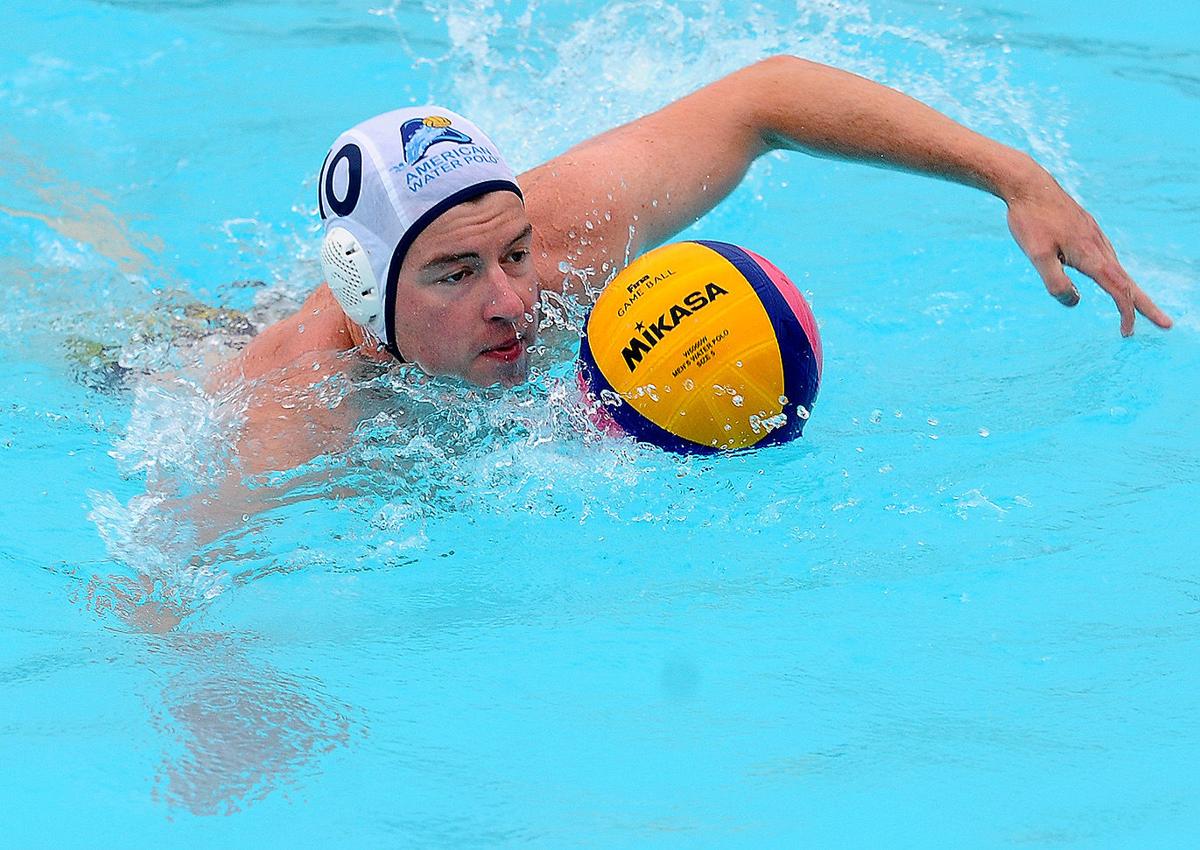 Steve Hilty dribbles the ball during a Renegades practice. 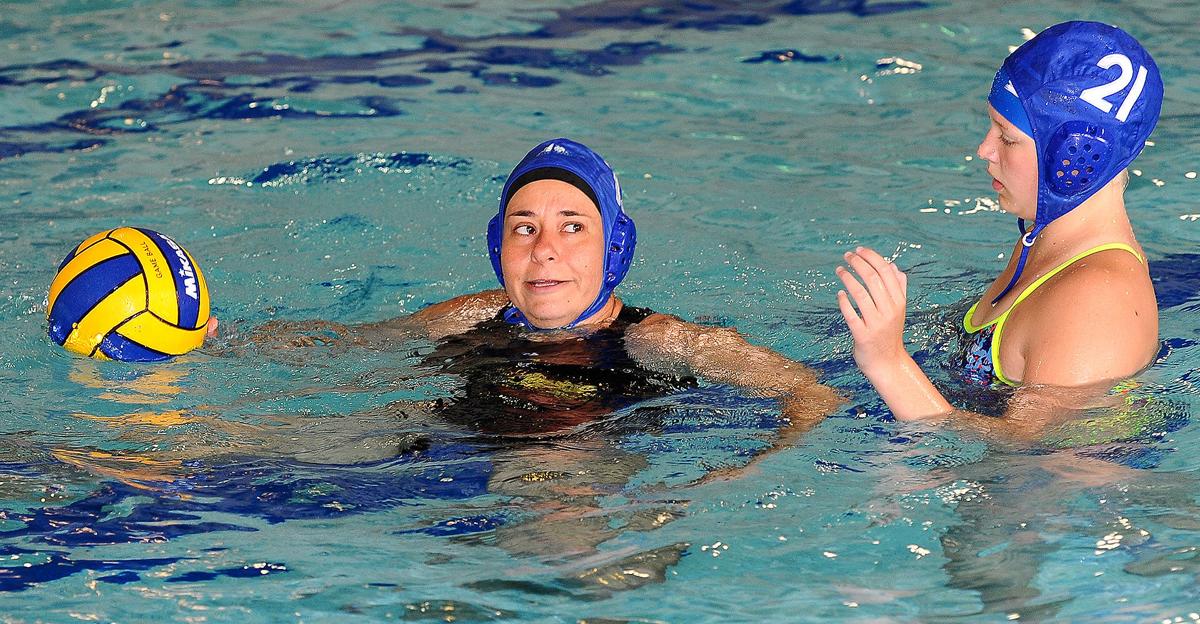 Joie Marhefka demonstrates to Katie Jackovic how to use her shoulder to fend off attackers during water polo play.

“When I started playing there was a lifeguard at the local pool where I grew up and I learned water polo at a camp,” Steve Hilty began. “It was one of those fun days at summer practice, and the minute that I wasn’t staring at a black line at the bottom of the pool and swimming in circles, I realized, heck, I’ll chase a ball around. This is a lot more fun than just swimming laps.”

“Honestly,” she said. “It is a bit more fun than swimming back and forth.

Today, those former college players and others are getting their kicks and conditioning by playing the game at the master’s level with the Pittsburgh Renegades Water Polo Club.

Established in 1975 by Mike Graff, the club recruited players in the Pittsburgh region who competed for their respective universities such as Pitt, Bucknell, Brown, Slippery Rock, Michigan, IUP and his alma mater, Harvard. Because Graff also coached at high schools such as Shadyside Academy, Fox Chapel and Chartiers Valley that fielded clubs, he recruited those players, as well.

The Renegades played in a summer league with teams from Chicago, New York, St. Louis, Toronto, Philadelphia and Washington, D.C. They worked out Monday through Friday for two hours at North Park, Pitt, CV, Settlers Cabin and Slippery Rock. Anywhere they could find a pool and a willing coach, they played. During the rest of the year, they played open tournaments.

“The players were very committed to the team and to the sport. They were extremely competitive and typically won most of their games,” said former South Hills resident Mark Gensheimer. “All this time, travel and history together created unusually strong personal bonds that remain to this day.”

While several of the original Renegade players and coaches competed on many regional and national teams that won NCAA national championships and have been inducted into the College Water Polo Association Hall of Fame, many referee or play at the master’s level today. Resurrected in the 1990s, the sport is enjoying another comeback thanks to folks like Hilty, Vincent, Gensheimer and Christian Achilles.

At 30, Hilty has drawn the younger collegiate crowd back to the game. After swimming for North Allegheny and helping the Tigers make it to states in their inaugural year and each ensuing season, Hilty played water polo for four years at Washington & Jefferson College. The Presidents ended up being ranked in the Top 10 in the nation during his senior year.

“That was a pretty cool accomplishment, to go out west and play some California teams and beat them,” Hilty recalled. “There were a lot of people that hadn’t heard of Washington, Pa. To add some success to a local area, it was fun to do that.

“That was the best part of W&J. It’s great to go to college and be part of a team and automatically have friends.

“Water polo is such a unique sport and it’s very prevalent. So you get people from all over country. So you get a lot of different dynamics, personalities, you get to meet a lot of different people. I think the best part about being on at team like that is you are bringing so many different types of people together from so many different walks of life that from the standpoint of when you are a team and you can find a way to have a common goal in that regard.”

Hilty’s goal is to bring players back to the game. He noted that a couple of his mentors were part of the original Renegads in the late 1980s. They didn’t care that he was 12 years old and half their size when he started to play.

“They kind of beat me up,” he said with a laugh, “but this was the sport for me. I liked the physical nature of it. I like the swimming aspect of it. So for myself in particular, when I graduated from college, I wanted to make sure that I had someplace to play because I absolutely love the sport. If we can keep this going, then that would be the ultimate win for me.”

Being able to still play at age 59 is an ultimate win for Gensheimer. Although he started swimming for the Mt. Lebanon Aqua Club 51 years ago, he met Graff at a water polo tournament at Chartiers Valley when he was a junior in high school.

“The rest is history,” Gensheimer said. “My enjoyment for swimming was quickly surpassed by a love for water polo.”

Gensheimer played for Bucknell and coached at the U.S. Naval Academy. Married for 34 years to Annie, an Upper St. Clair graduate, the couple raised four daughters. They have two grandsons and another on the way in September. Gensheimer is the president of CSMcKee, an Institutional Money Management Firm.

Throughout his adult life, he has competed with the Renegades.

“At my age it’s all about the camaraderie and helping the younger players. I have gotten so much joy from the sport, mostly the lifelong friendships created over the years,” Gensheimer said.

On a weekly basis, Gensheimer is in contact with his Renegade buddies that live all over the country. He continues to referee, coach and mentor in addition to playing. Currently, he is the board chairman for the College Water Polo Association.

“All because of my love for water polo,” said Gensheimer, who continues to swim four or five days a week while also biking and golfing.

While water polo players love the sport, the game can be challenging.

Most people aren’t terribly comfortable in deep water and can’t imagine sprinting up and down a pool, wrestling to gain control of a ball and then trying to throw it in a goal.

Water polo indeed is played in all-deep water in a 25-yard pool. Games are usually divided into four seven-minute quarters. Typically, there are eight players, including a goalie.

“Water polo is like basketball,” said Vincent. “The plays are the same. Picks are the same, but fouls are harder to get. It’s anything goes under the water. The goal, though, is to work to get the ball forward.”

The primary action takes place within a two-meter area of the goal. There are two referees: One observes the perimeter and the other watches the 2-meter area. “That’s where all the dirty action happens,” Vincent said with a laugh.

The game clock stops on fouls, when the ball goes out of bounds or after a goal. There is an offside rule, and there are counters as offensive and defensive moves. The main objective is to move the ball forward and score goals.

“Water polo is harder than running, but no one wants to make it a swim meet. No one wants to sprint. We joke around a lot saying ‘stop making this a swim meet’ to some of the players,” said Vincent. “The idea is to cooperate and work as a team.”

Nevertheless, conditioning is key to playing the game. The Renegades swim and do sprints during practice for 30 minutes, but they will scrimmage for more than an hour.

“There is a lot of swimming but you need to be in water polo shape,” Vincent said. “You have to get your legs toned because you need to be able to sprint back and forth.

Gensheimer noted that the hardest part about water polo is definitely the conditioning.

“The sport is a lot about sprinting up and down an all-deep pool and then if you don’t get a fast break shot, fighting with a defender to maintain either an offensive or defensive advantage. Some positions, center offense or defense are much more physically demanding. If you’re not in decent shape, don’t bother getting in the pool,” he advised.

When asked what the hardest part of the game is, Achilles said the answer would depend upon whom you ask but treading water is challenging. “That’s a physically tough aspect of the game,” said the 27-year-old Pitt graduate.

That should not discourage a potential player. Hilty encourages interested swimmers to learn the basics before they come out for the team.

“From the egg beater kick to treading water, make sure you can swim because there are times that we have had people come out that have been world-class wrestlers to football players that get in the water, and they can’t last 30 seconds. So it’s a different kind of sport, but I always welcome anybody to come and try at least one time to see if they can keep up with it.”

A sport for life

But is water polo a sport for life, similar to swimming, golf and cycling?

“I don’t know if I can do this into my 80s because I get beat up routinely,” said Hilty, who works as a medical device sales rep. “Maybe not as a 2-meter guy, but on the outside, I could find myself doing that. But definitely for a long portion of my life I plan to. I’d like to play for as long as I can.”

“Swimming is the best sport for you but water polo is a lifelong activity. For friendship and our health, mental and physical,” enthused Vincent. I do hope to be doing this when I am 90 because it’s a lot of fun.”

Life sometimes gets in the way, however. That’s OK, says Gensheimer.

“If you stay in very good physical shape, I think it is a sport for life. I expect to play for the next several years. I can’t even think to compete against college varsity players, but I still enjoy playing at the club and masters level. I can tell you that my water polo priorities and competitive desire decreases with the birth of every new grandchild,” he said.

But Hilty’s desire increases every time that he passes a pool.

“I grew up playing every contact sport there was, but I also felt like I was a pretty good swimmer so the fact that I could do all those in water and combine all the sports I love into one that for me was the best thing about water polo. To play outside in a pool like this,” he said after emerging from a practice at the Ammon aquatics center, “you can’t beat it.”