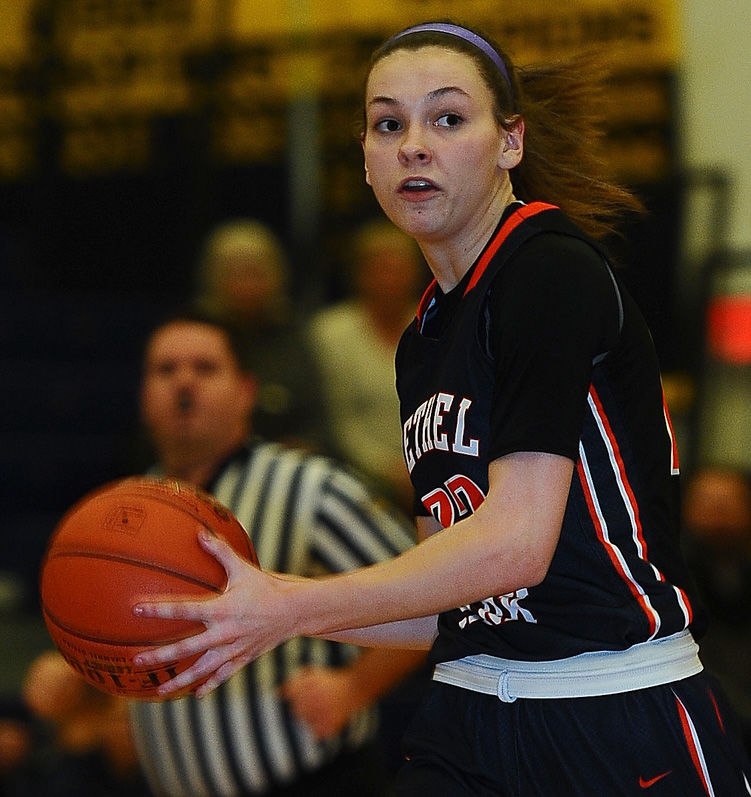 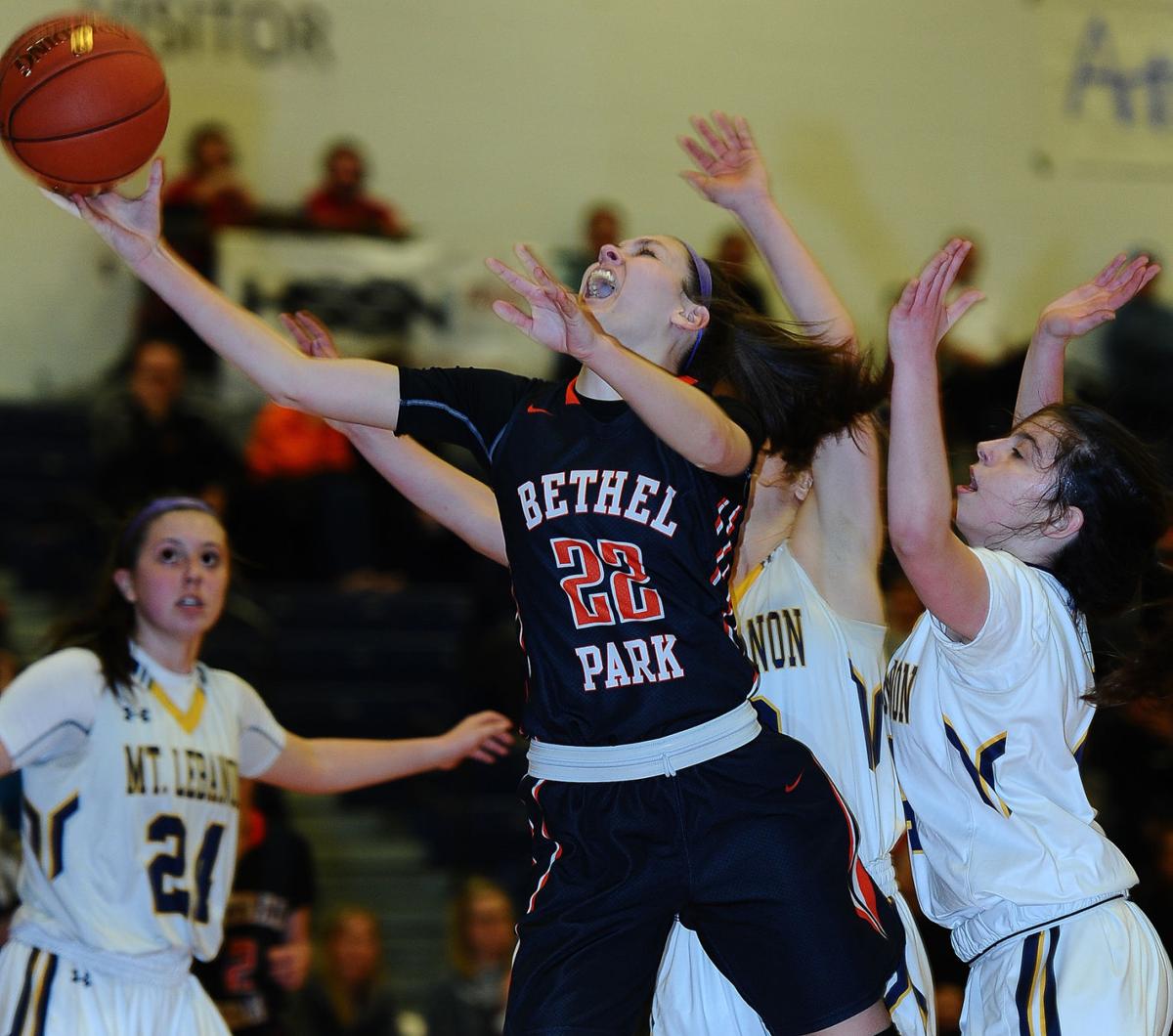 After putting defenders behind her, Olivia Westphal stretches for a basket during recent basketball action against Mt. Lebanon.

After putting defenders behind her, Olivia Westphal stretches for a basket during recent basketball action against Mt. Lebanon.

The contents of Olivia Westphal’s closet most likely look similar to many teenagers her age.

The Bethel Park High School junior owns between 20 to 30 pairs of shoes, many for basketball, including her Under Armour Steph Curry sneakers, which are solely meant to be worn on the hardwood.

Westphal said being the “baby” in a family of five affords her the opportunity to load her closet with plenty of options for footwear.

“I’m spoiled all the time,” she said with a laugh. “One of the perks are all the shoes I get, but I wear them out because I play so many games. I always need to get new ones.”

While she has been playing basketball since kindergarten, Westphal said she has been a “gym rat” since two weeks after her birth. The soon-to-be 18-year-old has two other siblings, Jordan, 28, and Kayla, 26, who played basketball as well as an uncle who excelled at Washington & Jefferson College.

In addition, Westphal has traveled the country playing AAU basketball since fifth grade — long before she arrived on the high school scene.

Indeed, nearly three seasons into her varsity career, Westphal has played in enough games to surpass the 1,000-point plateau.

During a 58-40 win against Woodland Hills in the Joey Fabus Memorial Classic Jan. 25, Westphal scored 19 points to reach 1,000. She followed up that performance with 13 points in BP’s 48-29 win over Peters Township Monday.

Westphal said reaching 1,000 points was a goal of hers, but helping the Black Hawks improve to 16-1 this season was equally as sweet.

“It warmed my heart,” she said. “It was so much fun to have my teammates with me. Our bond is unbreakable.”

“To have two players on one team reach 1,000 points is unusual,” Westphal said. “It rarely happens.”

Westphal is averaging 15 points with 2.5 assists and two steals per game.

“Liv has a scoring mentality and is a sneaky good defender, which combine to make her a great all-around player,” said BP head coach Jonna Burke of Westphal. “She has a quick release on her shot and an overall court savviness that makes her attractive to Division I schools. Plus, Liv is incredibly competitive. It drives her to be her best. She wants to win and is willing to do whatever it takes to make that happen.”

While she practices regularly with her team, Westphal also trains with Ed Withholder on strength, speed and fitness and has honed her shooting skills with Chartiers Valley girls basketball coach Tim McConnell. Plus, she puts in plenty of individual training.

“Ball handling. Lot of two-ball dribbling. Anything you can imagine,” she said. “It’s what people don’t see that gets players to where they want to be. I know all the workouts I have done on my own have helped me.”

She credits her parents, Maryann and Dan, for pushing her to be the best person she can be on and off the court.

In the classroom, she is an honors student, maintaining a 4.1 grade-point average. Westphal has 14 Division I scholarship offers.

“My parents have been the biggest influence on me. They really stressed the importance of character,” Westphal said. “Character means everything and colleges look at that more than skills.”

Westphal is also mentored by Washington & Jefferson College women’s basketball coach Jina DeRubbo. She said all of her influences, including the game itself, have taught her humility, acceptance and how to lose with grace.

“What I like best about basketball is the competitiveness,” she said. “I love to compete, but I hate losing. That’s the worst thing in the world. Basketball also teaches you to be humble and to act like you have been there before.

“I know that I have not always been that player, but it’s something I have worked on. When I’d do something wrong, I would get so down on myself, get mad at myself. Now, I can look past it. I’ve learned to let it go and play on.”

Westphal and the Black Hawks have recovered from a last-second loss to Mt. Lebanon. Westphal fouled out of BP’s 52-21 loss for the first time in her career.

Though the loss jeopardized BP’s hopes for winning the section outright, Westphal said it has prepared her team for a long playoff run.

“Our No. 1 goal is to win a WPIAL title. Ever since I was little I wanted to reach that point in my life, reach the Pete,” she said of the University of Pittsburgh venue where the WPIAL finals are played. “That’s the first step toward states. That’s where you’ve got to get to in order to make your run.”

College choices: Has 14 Division I offers, including some Ivy League interest

Book: The Adventures of Huckleberry Finn

Who you would like to have dinner with: Lebron James “He just seems like a fun guy.”

Biggest lesson sports has taught you: To be humble

Thoughts on Kobe Bryant’s death: “I think it’s terrible and so sad. He was changing girls’ basketball and going to make it into something big. His daughter was going to be a good player.”