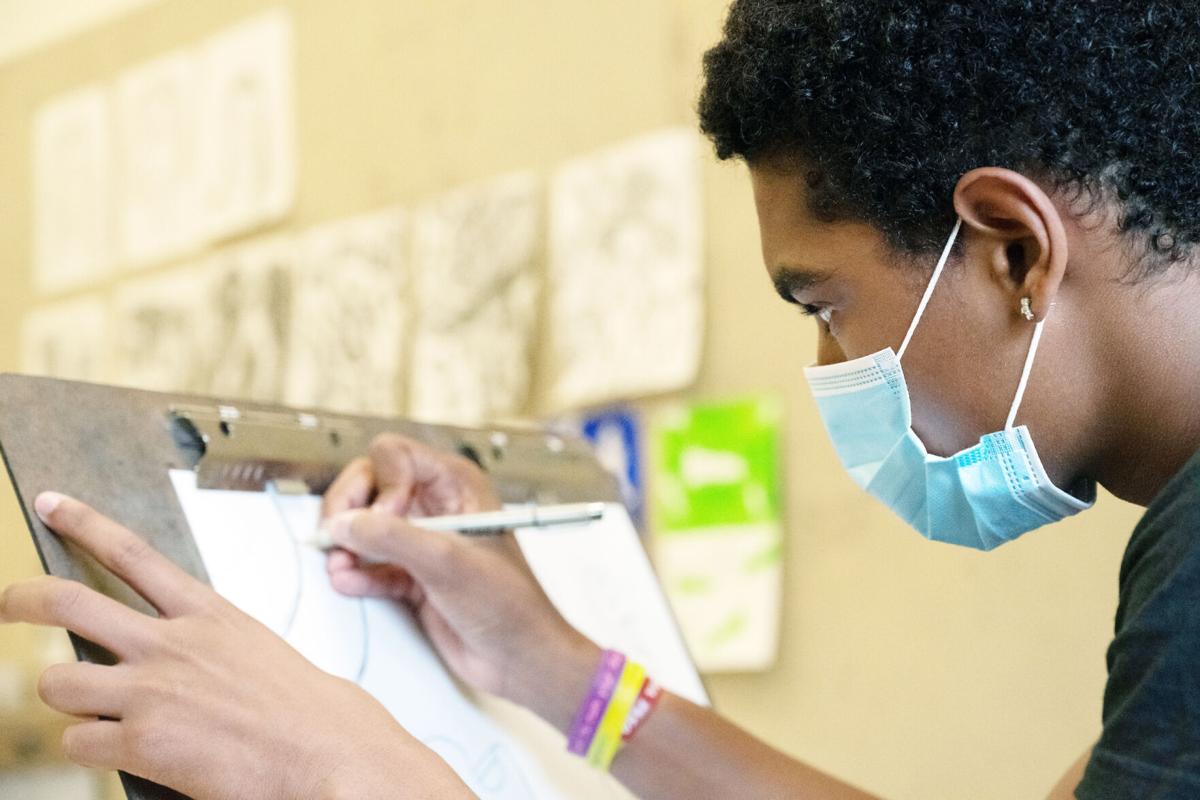 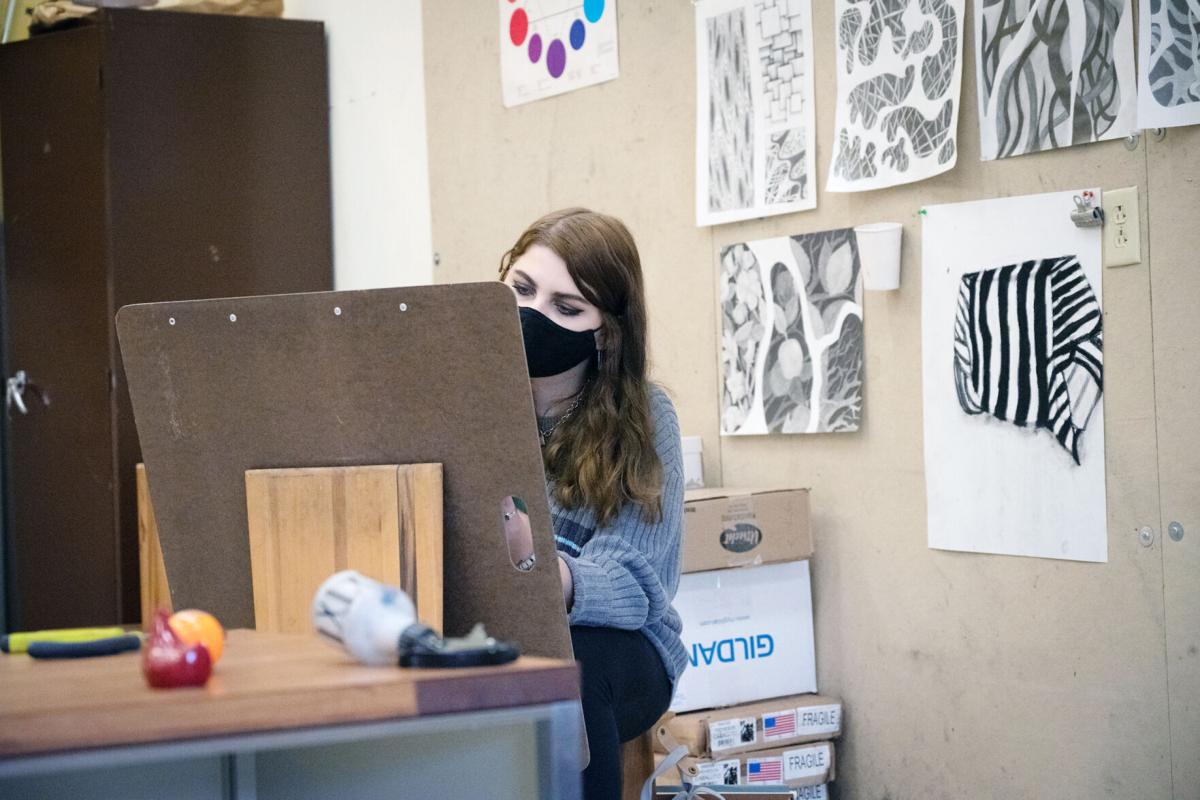 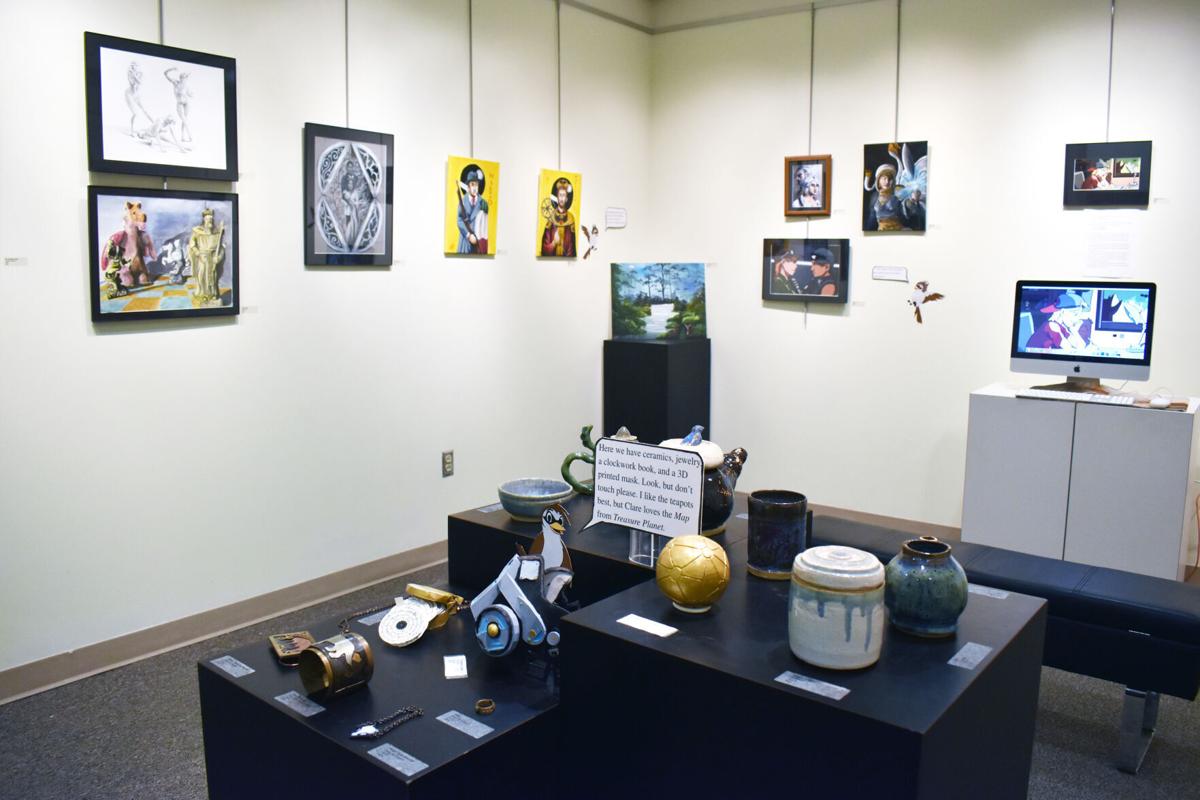 Waynesburg University senior Clare Rainone displayed her senior art show in the school’s art gallery in March. Only on-campus students, faculty and staff could see her art in person, just one of the changes that had to occur over the past year in response to the coronavirus.

Waynesburg University senior Clare Rainone displayed her senior art show in the school’s art gallery in March. Only on-campus students, faculty and staff could see her art in person, just one of the changes that had to occur over the past year in response to the coronavirus.

The arts, by their nature, are full of innovators – those people who will think outside of the box to make something work in any given situation.

And that’s why a virtual production of William Shakespeare’s “The Tempest” will jettison into 2021 with the help of Zoom ... and PowerPoint.

Characters in the April show will introduce their backstory to the audience with a PowerPoint presentation, said Daniel Shaw, the designer and technical director of Olin Fine Arts Center at Washington & Jefferson College.

“We might as well acknowledge this is Zoom, so we’re taking a lot more liberties than we would have had it been on stage,” he said.

Shaw, also an assistant professor of communication arts at W&J, knows virtual performances don’t carry the same weight as live ones, but since that’s what the pandemic requires, he and his colleagues in the area are striving to make the most of them – even through the bumps in the road.

Dr. Daniel Krack, adviser for the Lion Players at Penn State Fayette, The Eberly Campus, said the difficulties of putting on a virtual show were exacerbated by technical challenges.

Poor internet speed created major issues for some students when trying to cast and rehearse the play they presented in December, Krack said.

“Some people live in rural areas where there is very little internet access, so if we’re in the middle of a rehearsal and one of our actors loses internet access, we’re in a predicament,” he said. “One of our principal characters that was in every scene was having difficulties with her technology, so that was the biggest issue.”

Some days that meant rescheduling rehearsal or working on scenes that didn’t involve the actor. Another role had to be recast, Krack said, because the student did not have a strong enough internet connection to participate in rehearsals.

Theater productions weren’t the only higher education arts programs to adapt and overcome.

When Waynesburg University closed for in-person classes in March 2020, Andrew Heisey struggled with how to teach creative arts classes to students who didn’t have the resources at home that they would have at school.

Heisey, chair of the fine arts department, said professors asked students to create art from what they had at home. One jewelry class ended up creating jewelry with items like paper, and ceramics class students started using a clay that could be baked in a kitchen oven.

“It wasn’t what it normally was, but we were able to make art,” he said.

“The art that has been created by those fortunate enough to be in a position where they still could create things was a definite learning experience for all of us,” said Dr. Michelle Pagen, theater director at California University of Pennsylvania.

At Waynesburg, musicians rehearsed virtually, but found a return to campus in the fall presented a new hiccup.

Blowing into certain instruments meant a musician’s breath would also exit their mouth – and potentially spread the coronavirus.

Universities and colleges in the area implemented an interesting solution: special masks that accommodated instruments to help quell the spread of germs.

Mark Swift, chair of the music department at W&J, said choir practices have lost their social appeal because of distancing procedures.

“Being in a choir is about being in a choir. So much of it is social activity,” he said. “It’s just really hard to create that sense of choral community when everyone is online.”

Heisey said Waynesburg choir members have been performing outdoors, so student and faculty on campus can listen to them.

Despite the hardships colleges dealt with teaching students during the pandemic, professors in fine arts said the challenges afforded them a chance to learn and grow, too.

Krack said there are many skills he honed thanks to the struggles he faced in advising a virtual performance.

And Pagen said she believes some of the new operations put into place, particularly in more use of technology for productions, will stay after shows are once again live and in-person. It’s created a unique new method of art, she said.

“We need to remember how precious what we do is to us, even in the hard days when we’re tired and overwhelmed,” said Pagen. “We can’t forget that we are privileged to be able to express our art and work together in the creation of art.”